The 16 most socially advanced countries in the world

The Social Progress Index is a metric that measures progress through fulfillment of basic human needs (rather than traditional indicators of economic growth).

First released in 2013, the Social Progress Index (SPI) measures a comprehensive array of components of social and environmental performance, aggregating them into an overall framework.

The index, which covers about 99% of the world’s population, was created collaboratively by Professor Michael E. Porter at the Harvard Business School, Professor Scott Stern at the MIT Sloan School of Management, and the Social Progress Imperative, a nonprofit group, and ranks these social and environmental measures that underline well-being and opportunity. 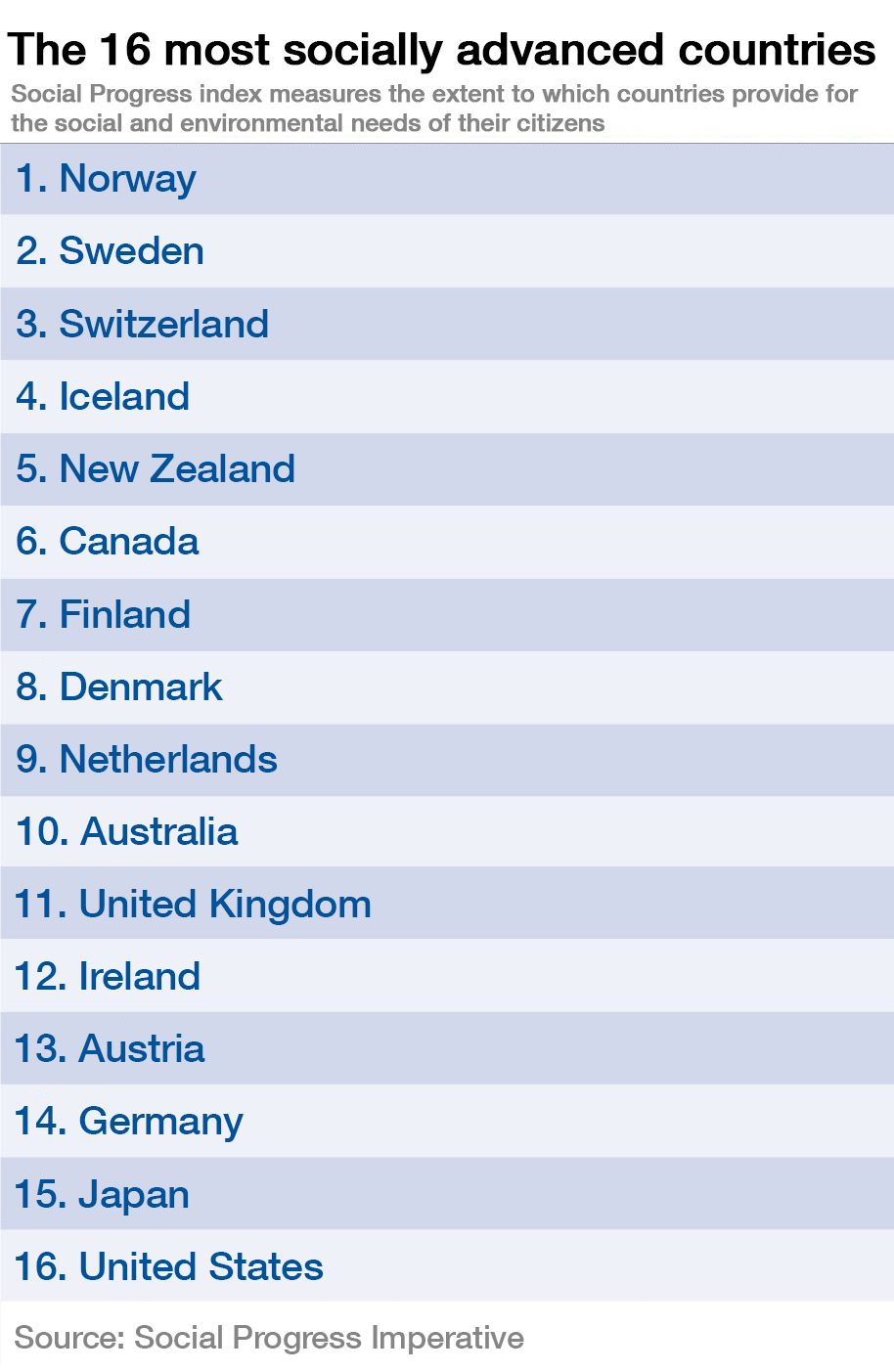 In terms of meeting basic human needs, the US ranked 21st overall, including 6th in Shelter. In nutrition and basic medical care, however, the US lagged behind at 39th.

The country ranked 8th overall in Opportunity and 1st in Access to Higher Education. But in terms of personal freedom and personal rights, the US ranked only 15th and 24th, respectively.

The US ranked particularly poorly in overall well-being: 68th in Health and Wellness and 74th in Ecosystem Sustainability.

Japan ranked 1st in Access to Basic Education and 4th in Shelter, but lagged in Air, Water, and Sanitation (21st), Nutrition (17th), and Health and Wellness (19th). It also ranked 67th in Ecosystem Sustainability.

The country performs well in Personal Rights, where it ranked 5th, but ranked 21st in Personal Freedom and Choice, 42nd in Tolerance and Inclusion, and 19th in Access to Advanced Education.

Germany ranked 1st in Water and Sanitation, 10th in Shelter, and 12th overall in meeting Basic Human Needs. The economic giant ranked 50th in Heath and Wellness, however, and 24th in Ecosystem Sustainability.

The country underperformed in Opportunity, where it ranked 16th overall; it was 28th in Personal Rights and 18th in Equity and Inclusion. The country ranked better (13th) in both Access to Higher Education and Personal Freedom and Choice.

Austria is fourth best in the world in meeting Basic Human Needs, and is tops in the world in providing clean water to drink and bathe in (tied with several other nations). It also ranks within the top ten in providing Shelter (9th), Personal Safety (7th), and Nutrition and Basic Medical Care (5th).

In terms of well-being, the country ranks high in Access to Information and Communication (10th), but lags behind in Access to Basic Knowledge (32nd) and Health and Wellness (38th).

The Irish own the twelfth spot, and rank within the top 20 in every major category on the SPI except for Water and Sanitation (where they rank 22nd) and Ecosystem Sustainability (where they rank a distant 119th).

The Irish also do particularly well in terms of access to opportunity: Ireland ranks second in the world in Tolerance and Inclusion and sixth in Access to Higher Education.

The Brits have a lot to be proud of, including their Personal Rights record, for which they currently rank second in the world. They rank well (6th overall) in access to opportunity, too.

Elsewhere, the old empire ranks highly in Water and Sanitation (17th), Access to Higher Education (4th), and Access to Information and Communications (15th).

Healthcare is not the nation’s strength: the UK currently ranks 27th in Nutrition and Basic Medical Care and Health and Wellness.

Australia is tied with several other nations for the highest quality Water and Sanitation in the world — no wonder people love to surf there. Couple that with high rankings in Nutrition and Basic Medical Care (7th) and Health and Wellness (5th) and it is pretty clean living down under.

Australia could stand to improve in other areas, as it currently ranks 29th in Access to Basic Education and 64th in Ecosystem Sustainability.

On the plus side, Australia’s access to opportunity ranks third in the world, and it has a phenomenal Personal Rights record rivaled only by the UK and New Zealand.

The Netherlands may have dropped five spots in the rankings this year, but the lowland country is still a good place to find a home: the country ranks third in the world in providing Shelter and is tied for first in Water and Sanitation.

Like many other developed nations, Netherlands lags behind in Ecosystem Sustainability (25th) but more than makes up for it with Access to Basic Knowledge (8th), Access to Information and Communications (2nd), and Personal Freedom and Choice (5th).

The Netherlands does not rank outside the top 25 in any major category.

Denmark is the most advanced country in the world in terms of providing its people with Basic Human Needs including clean water (tied 1st), Personal Safety (5th), and Shelter (1st).

The Danes also enjoy a high quality of life, as the country ranks sixth in Access to Basic Knowledge and fourth in Information and Communication Systems as well as Personal Freedom and Choice.

It isn’t all perfect though — Denmark ranks only 26th in the world when it comes to the Health and Wellness of its people.

The Fins rank third in the world in Providing Basic Human Needs, seventh in providing Opportunity, and eighth in providing the Foundations for the Wellbeing of its people.

Finland is a world leader in offering Nutrition and Basic Medical Care as well as the Freedom of Choice. It is also second in the world in providing Shelter.

As always, there is room for improvement, particularly when it comes to Ecosystem Sustainability (43rd), Health and Wellness (18th), and Water and Sanitation (18th).

If you want to move up in the world, move to Canada. Our neighbor to the north ranks first in the world in providing Opportunity to its people, ninth in Personal Freedom and Choice, and third in both access to Advanced Education and Tolerance and Inclusion.

When you account for the Foundations of Wellbeing, however, Canada loses some of its global stature: the country ranks only 18th in Access to Basic Knowledge and 25th in Access to Information and Communication.

Last year’s most socially progressive nation may have dropped four spots, but it’s not as bad as you think.

New Zealand is tied for first in the world in Water and Sanitation and Personal Rights and is right behind Canada in offering Opportunity for its people (2nd). New Zealand also ranks third in the world for Access to Basic Knowledge and fifth in Tolerance and Inclusion.

In terms of overall well-being, the island nation has some work to do: New Zealand ranks only 28th in Nutrition and Basic Medical Care and 34th in Ecosystem Sustainability.

Iceland ranks first in Water and Sanitation, Personal Safety, and Tolerance and Inclusion, and second in Nutrition and Basic Medical Care and Health and Wellness. It ranks third in Access to Information and Communications.

It is also worth noting that Iceland ranks 13th in Ecosystem Sustainability, which is higher than any other nation on this list thus far.

Iceland does rank 27th in Access to Advanced Education, which is its only ranking of all major categories outside of the top 15.

The Swiss do many things well, but when it comes to Ecosystem Sustainability they are the envy of the international community.

They are also strong in Personal Safety (3rd), Providing Shelter (5th), and offering the Freedom of Personal Choice (3rd). Their Achilles’ heel? The Swiss rank 48th in the world in Access to Basic Education.

Overall, they rank second worldwide in Meeting Basic Human Needs and in providing the Foundations of Wellbeing.

It does not get much better than Sweden. The Baltic nation ranks outside the top 10 in only two categories: Shelter (16th) and Personal Rights (11th).

Norway is the most socially progressive country in the world.

In particular, Norwegians have the strongest Foundation of Wellbeing of any country, ranking first in Access to Communications and Information, second in Ecosystem Sustainability, and third in Health and Wellness.

Norway can still improve, however: its worst ranking is in its Access to Advanced Education, where it sits at 16th. It also ranks 14th in Shelter and 11th in Personal Rights.

With Norway and Sweden sitting at one and two on the SPI, it may finally be time to plan that trip to Scandinavia.

Image: The sunset is reflected off the buildings of The Barcode Project in Oslo. REUTERS/Cornelius Poppe/NTB Scanpix