How global poverty rates have halved since 1981

We recently looked at a Pew Research Center study on the state of global poverty, and we decided to take a look at the recent history of poverty.

The World Bank maintains a database measuring poverty and income distributions around the world. One of the tools available on the World Bank’s site allows users to input the poverty line of their choice, and the site will calculate the proportions of populations in the developing world that fall below that line in different countries, regions and years.

We looked at how many people lived on $2 per day or less between 1981 and 2011, the years for which the World Bank has data. To adjust for inflation and the different costs of living around the world, the World Bank presents its estimates using 2005 Purchasing Power Parity dollars, which adjust national currencies to reflect how much a person can actually buy with a given amount of money. 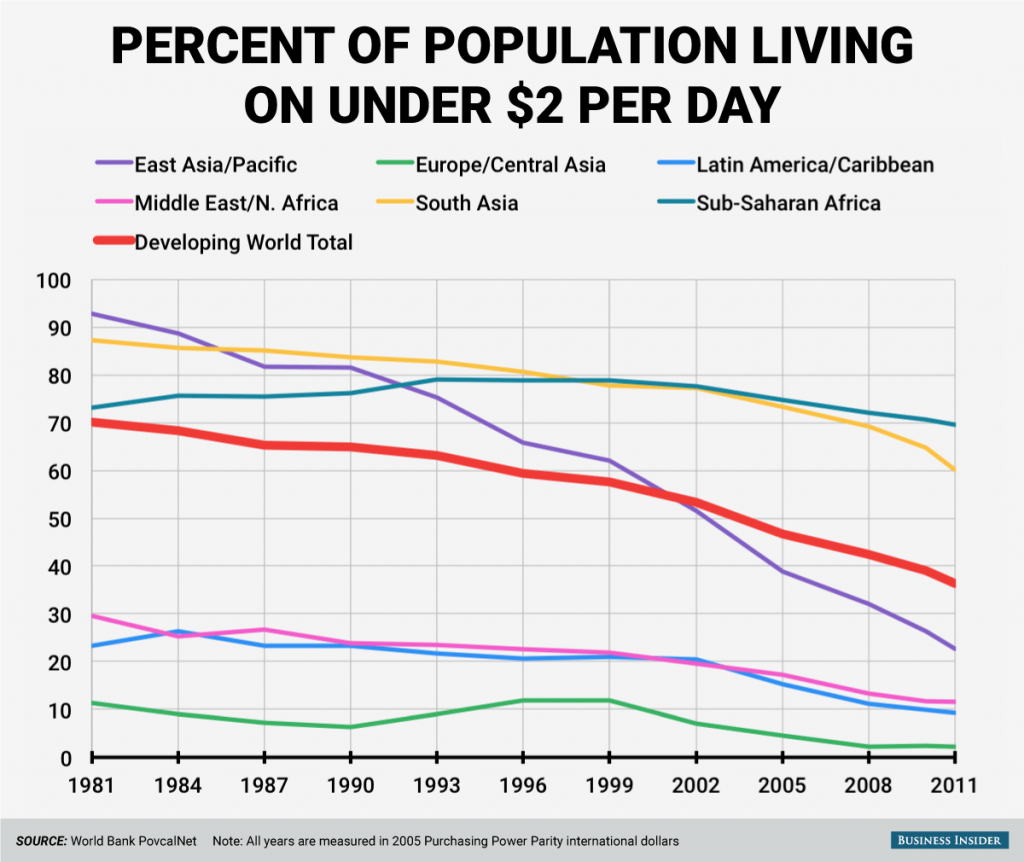 The biggest drop in poverty came in East Asia, where poverty rates plummeted from a worldwide high of about 93% in 1981 to only about 23% in 2011. Most of that fall in extreme poverty in East Asia came from the astonishing rise of the Chinese economy over the last three decades.

There was a brief uptick in poverty rates in the developing parts of Europe and Central Asia during the 1990s. Most of that region was part of the Soviet Union, and the economic and political chaos following the fall of communism lead to a temporary increase in the proportion of people living on less than $2 per day.

While extreme poverty has declined in all of the regions measured by the World Bank, much still needs to be done in places like Sub-Saharan Africa, where 69% of the population still lived on under $2 per day in 2011, and in South Asia, where the poverty rate is still around 60%.

Image: Five-year-old Nasreen rests with her family’s belongings as she plays under a flyover in Mumbai, India. REUTERS/Danish Siddiqui