What next for Iran’s economy?

Just hours after the Vienna agreement with Iran was signed, Iranian President Hassan Rouhani took to Twitter to share his thoughts: “Today is a new chapter to work towards growth and development … a day for youth to dream again of a brighter future.”

Containing both an opportunity and an imperative, these words underscore a larger reality, that economically Vienna is for Iran less about how it can return to its pre-sanctions shape, and more about building a new economy.

And so while the security implications of the agreement are of course paramount and will ultimately shape its future, there is clearly the possibility of an economic transformation at play here as well, which goes well beyond the current, rather simplistic, focus on the post-sanctions investment outlook.

What may, therefore, the building blocks of such a new economy be?

The sanctions relief stemming from Vienna represents a key opportunity to enhance competitiveness by providing a more stable economic context and a window of opportunity for transforming the economy. Iran will be able to build on its solid macro-economic positioning, its large market size, and its fairly well-educated population. These are strong attributes that will likely improve once sanctions are lifted. Oil revenues will provide an even stronger macro-economic cushion for investment in future competitiveness and market size will grow, fuelled by markets to which the country will be able to export. To make the economy more competitive and diversify it, crucial improvements on issues such as access to finance, government and labour efficiency, and an effective judicial framework for resolving business disputes will be needed for Iran to compete in a more open and global market.

In his May 2015 article, Klaus Schwab, Founder and Executive Chairman of the World Economic Forum, argues that “in a future of rapid technological change and widespread automation, the determining factor – or crippling limit – to innovation, competitiveness and growth is less likely to be the availability of capital than the existence of a skilled workforce”. 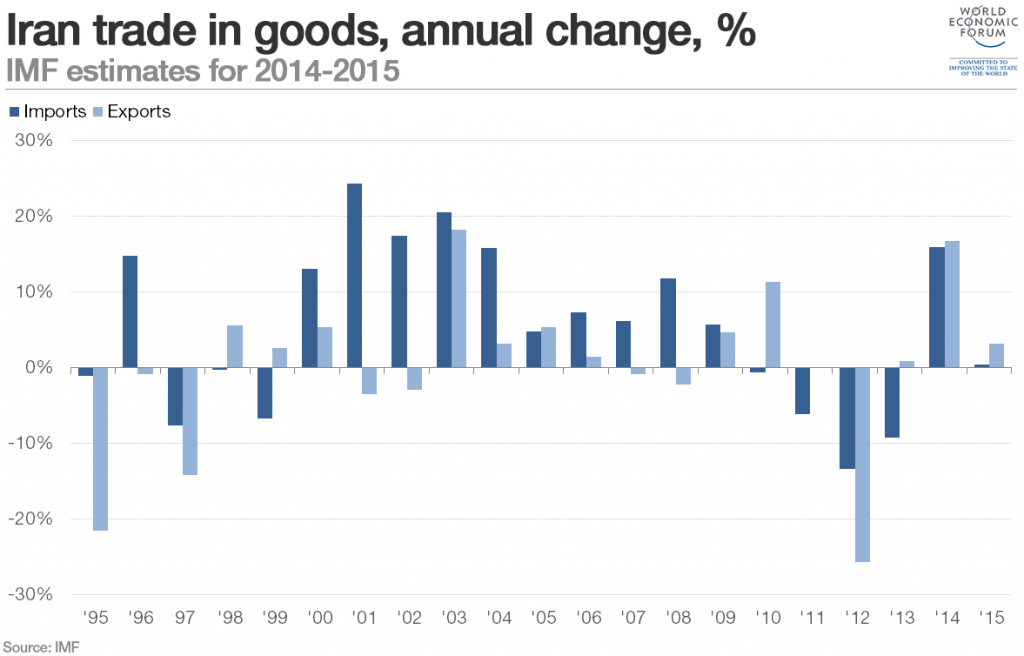 In this context, the key issue for Iran is that despite significant investments in developing human capital, this talent is not being used to its full potential. For example, according to the latest World Economic Forum Human Capital Index, Iran’s labour-force participation rate for those between 25 and 54 years old is at 55.8%, placing it in 123rd position out of the 124 countries ranked. Youth unemployment stands at over 20% and there is also a significant gender gap in the workforce, despite nearly equal enrollment in schools and universities. This picture is compounded by a significant brain drain.

A critical next step is therefore to expand workforce opportunities in a variety of sectors, with a particular focus on youth and women.

Iran’s economic future is also intimately linked to an upgraded infrastructure. Forecasts from BMI Research look positive: 1.4% year-on-year growth in the Iranian construction industry for 2015, and an average of 3.1% over the next five years. The Iranian transport minister, Abbas Ahmad Akhoundi, estimates that post-Vienna investment in the country’s railways and roads will reach $25 billion and $30 billion respectively.

At the same time, to enable truly systemic and sustainable improvements, there is a clear imperative to remove administrative barriers to infrastructure development. In the World Bank’s Doing Business report, Iran ranked 172nd out of 189 countries, for the ease of obtaining construction permits, for example.

However, arguably even more important than “hard” infrastructure for Iran’s future will be the ability to expand its digital economy. In the Forum’s latest Networked Readiness Index, Iran ranks 96th out of 143 countries assessed. As gains in ICT adoption and development are increasingly seen globally as not only productivity imperatives, but also key drivers of social and economic inclusion, digital infrastructure is quickly emerging as Iran’s new industry and social frontier.

While the Vienna agreement is of key significance to international security, it also represents a potentially transformative moment for Iran’s economic future.

Have you read?
6 facts on the second Suez canal
What do the Greece and Iran deals have in common?

More on Iran View all

How coronavirus is spreading around the globe - an infographic

As coronavirus starts to gain a tighter grip on the world outside of China, numbers of reported infected and dead are on the rise in countries such as Iran, South Korea, Italy and Japan.

Iran has developed the ability to win wars through third parties, and so minimize the chances of retaliation, argues John Chipman of ISIS

Iraq must be allowed to stay neutral in any U.S. – Iran conflict. Here’s why

Why is the Strait of Hormuz so important?

Japan’s historic opportunity to play peacemaker between the U.S. and Iran