5 ways the world will look dramatically different in 2100

Think the world is crowded now? You haven’t seen anything yet.

But those numbers won’t stay that way for long. The charts below, created by data scientist Tariq Khokhar for the World Bank data blog using the medium estimates of the UN figures, show our world is set to change in surprising ways. 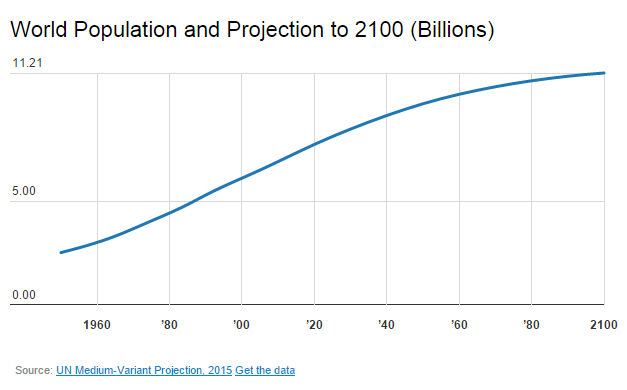 The world population is growing at a gradually slower and slower pace, but it’s still growing substantially. Currently, the world adds about 83 million people per year, equivalent to roughly the population of Germany. But population growth has slowed to 1.18 percent per year from 1.24 percent a decade ago.

The UN expects population growth to continue to gradually level off. Global population is almost sure to rise in the short term but the UN says there is a 1 in 4 chance that the world population will stabilize or fall before 2100.

How accurate are these predictions? In the past, the UN has had a pretty good track record with its population predictions, as In 1948 it projected world population would be around 6 billion in 2000, only less than five percent off from what it was that year, Khokar points out.

As the saying goes, past performance is no guarantee. There are a few factors that could skew these results. One that the UN mentions in its report is how fast the birth rate falls in countries where women currently have a lot of kids. The UN is expecting fertility to fall substantially, but that will hinge on things like investments in women’s health and expanded access to birth control.

2. That growth is mostly coming from one continent — Africa. 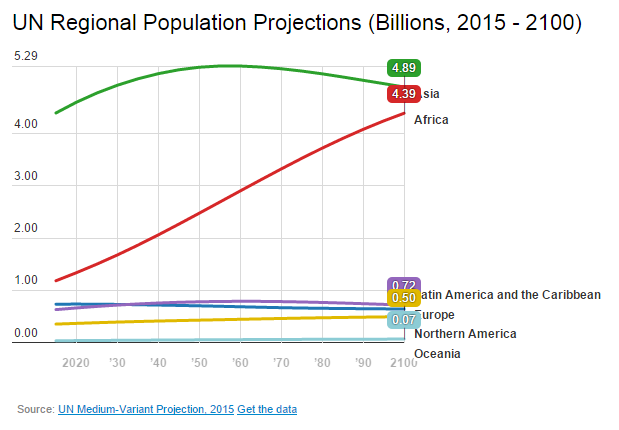 The UN’s projections for Africa are pretty mind-blowing. Africa is expected to more than double its population by 2100. Africa currently accounts for 16 percent of the global population. The UN expects that proportion to rise to 25 percent in 2050 and 49 percent by 2100.

That’s mostly because the continent is so young, and partly because fertility rates are high. Exactly half of the continent’s population was under the age of 24 in 2015. Many of these people will have children of their own in the next few decades, adding greatly to the global total.

In contrast, the chart above shows the UN expects Asia’s population to peak and then begin to fall, since many Asian countries have aging populations. Latin America, Europe, Northern America and Oceania will mostly stay pretty constant.

Below are two more interactive charts by Khokhar showing just how much Africa will add to the world population. 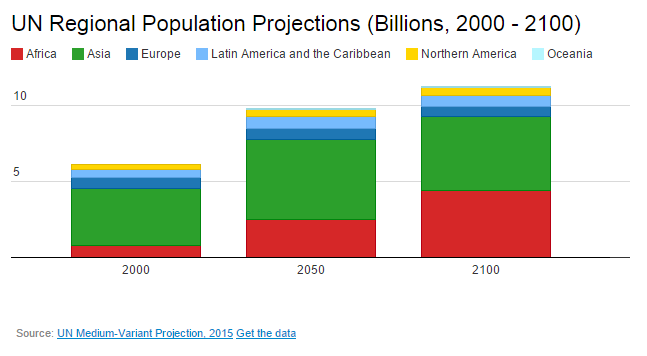 3. Nigeria will soon become the world’s third most populous country. 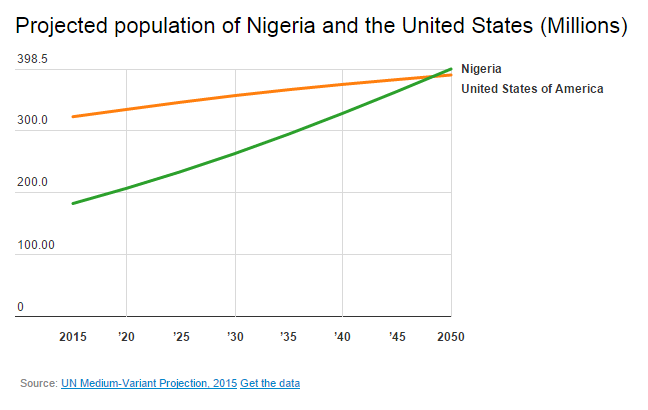 Nigeria’s population will be bigger than that of the U.S. before long. The country is expected to surpass America by about 2050 to become the third largest country in the world, the UN says. At that point, China, India, Indonesia, Nigeria, Pakistan and the U.S. will all have populations of more than 300 million.

The UN stats also show that nearly half of the world’s population growth that will happen before 2050 will be concentrated in nine countries: India, Nigeria, Pakistan, Democratic Republic of the Congo, Ethiopia, Tanzania, the U.S., Indonesia and Uganda.

Demography buffs may already know this one, but India is set to become the world’s most populous country very soon. China now has 1.38 billion people, compared with 1.31 billion in India. By 2022, both countries will see their populations rise to 1.4 billion. After that, China’s population will level off as its people age, but India will keep growing to 1.5 billion in 2030 and 1.7 billion in 2050.
The chart below shows just how much of the world’s population growth is happening in India.

5. Europe is getting really old.

Right now, about a quarter of Europeans are 60 or older. That proportion will rise to a little more than a third in 2050 and 2100.

Outside of Africa, the global population is also set to age. By 2050, in all areas of the world except Africa, nearly a quarter or more of the population will be 60 or older. Countries including Bosnia and Herzegovina, Bulgaria, Croatia, Hungary, Japan, Latvia, Lithuania, Republic of Moldova, Romania, Serbia, and Ukraine will see their populations fall by more than 15 percent by 2050.

One way to measure the aging of the global population is the median age, which is the age that divides the world population into two halves of equal size, the UN says. That age is now 29.6, but it will rise to 36 in 2050 and 42 in 2100.

Author: Ana Swanson is a reporter for the Washington Post.