5 reasons why we need to reduce global inequality

This is part of a series on the Global Goals for Sustainable Development, in collaboration with the Stockholm Resilience Centre. This article focuses on goal 10 – Reduce inequality within and among countries

In 2014, Credit Suisse published a new Global Wealth Report that estimated the net worth – both financial and “real” assets like housing – for all the world’s adults. According to the report, the richest 0.7% of adults globally – individuals holding over $1 million in wealth – held about 44% of global net worth. In 2008, the United Nations University (UNU) and the World Institute for Development Economic Research (WIDER) estimated that the Gini coefficient for global wealth inequalities, an index ranging from 0 (complete equality) to 1 (total inequality), was at 0.89. Put another way, this is the value you’d obtain in a population of 10 people if one person had $1,000 and the other nine had only $1.

Inequality emerged as a central issue for the Sustainable Development Goals (SDGs) because of the growing body of evidence that inequalities in income and wealth cause economic instability, a range of health and social problems, and create a roadblock to the adoption of pro-environment strategies and behaviour. Social and economic inequalities tear the social fabric, undermine social cohesion, contribute to environmental problems and prevent nations, communities and individuals from flourishing.

It is hardly surprising then that the countries most likely to meet the 17 SGDs first are Sweden, Norway, Denmark and Finland, according to a report published last week. The Nordics have the highest levels of equality in the world. 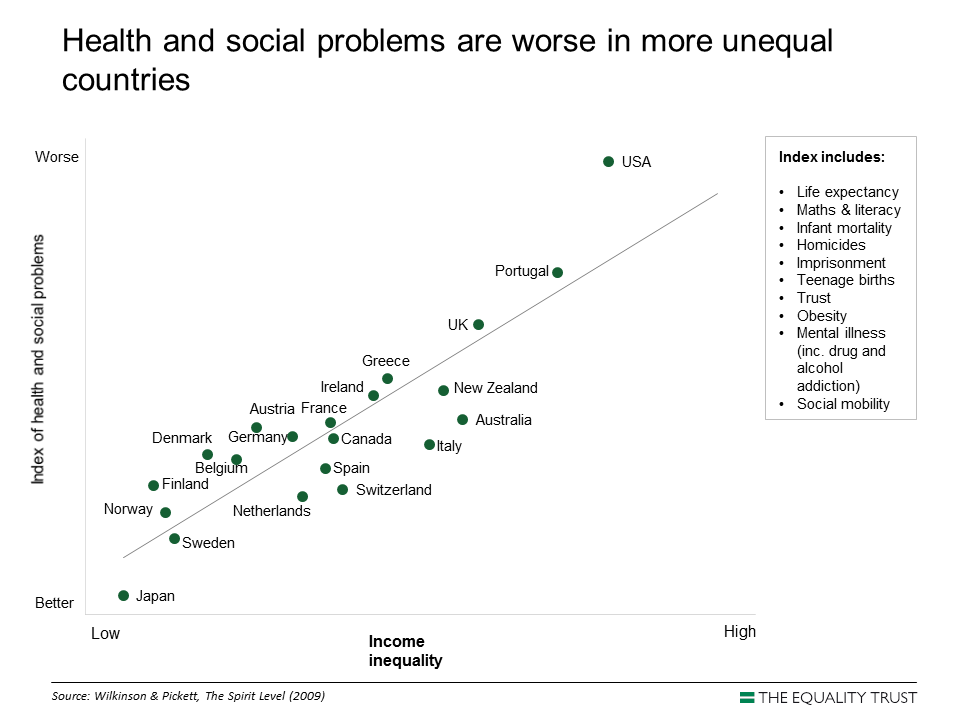 Life expectancy is shorter and mortality rates are higher in more unequal societies – this applies to both the poor and, perhaps surprisingly, also to the rich in these societies. Rates of infant mortality, mental illness and obesity are also two to four times higher. In more unequal developing and developed countries, HIV infection prevalence rates are higher.

Scores on the UNICEF index of child well-being are significantly worse in unequal countries and decline as inequality rises. Maths and literacy scores are also lower and more young people drop out of education, employment and training, and more teenage girls become mothers. Social mobility is restricted by inequality – equality of opportunity is increased by greater equality of outcomes. More equal countries tend to have higher rates of innovation, probably because of greater social mobility.

Poverty reduction is compromised by income inequality. The International Monetary Fund states that reducing inequality and bolstering longer-term economic growth may be “two sides of the same coin”. In rich and poor countries, inequality is strongly correlated with shorter spells of economic expansion and less growth over time. Inequality is associated with more frequent and more severe boom-and-bust cycles that make economies more volatile and vulnerable to crisis.

For real improvements in worldwide population well-being we need more equal societies, which are best achieved by putting democracy at the heart of economic policy and practice. Alongside international and national efforts to create progressive tax regimes and deal with tax avoidance and tax havens, the extension of democracy into economic institutions can have a major impact in reducing inequality. There are a number of simple, feasible measures that nations can take to grow equality alongside economic democracy.

Here are six ways to reduce inequality through economic democracy:

For more see: The Equality Trust, the Alliance for Sustainability and Prosperity, watch Richard Wilkinson’s TED talk on how economic inequality harms society

Image: A man uses an automated teller machine next to a woman begging for money on the street in the Georgian capital Tbilisi, June 20, 2012. REUTERS/David Mdzinarishvili

Development needs to change. Bangladesh can show us how

Hailed as a case study in poverty reduction, Bangladesh has much to teach us about new approaches to sustainable development that are fit for today's world.

To decarbonize heavy industry, we must focus on industrial clusters

Decarbonizing heavy industries such as cement and steel production is not impossible. To make progress at scale, we need to focus on industrial clusters

How to use local knowledge for a green recovery