Are we ready for self-driving cars?

The World Economic Forum, in conjunction with the Boston Consulting Group, has released the results of its first global survey of consumers’ attitudes towards self-driving cars. Our focus groups, and subsequent survey of 5,500 global city dwellers, reveals several surprising conclusions.

The first surprise is that consumers are vastly better informed about the topic than conventional wisdom suggests. Several executives at car companies I talked to said that “consumers don’t even understand what self-driving means”. Our research suggests otherwise. In our focus groups, average consumers given minimal, neutral prompting, were able to articulate use cases and implied benefits, both social and individual, with ease. They included doing business while on the road, or spending quality time with their children.

It’s obviously difficult to engage consumers in a conversation about a product they have never experienced, but the data in this research suggest that consumers are more amenable to the self-driving vehicle age than we might otherwise think. As the below graph shows, 58% of global respondents say they would take a ride in a fully self-driving vehicle. Acceptance is highest in emerging markets, such as China, India and the United Arab Emirates, about 50% in the US and the UK; and lowest in Japan and Germany. 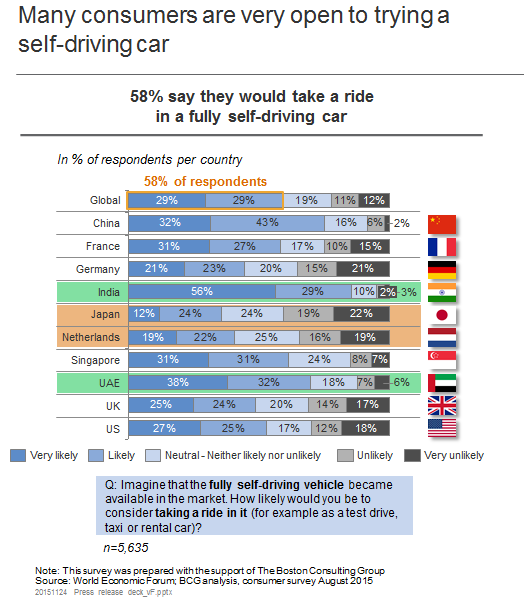 Couple this enthusiasm with rapid technology advances, and it’s easy to come to the conclusion the road is open for self-driving cars. For example, Tesla’s launch in October of partial autonomy in cars across the world has gone off without any major hitches so far.

But our research suggests that the road ahead might not be so smooth, particularly regarding the use of driverless cars in urban areas. Autonomous cars may not dramatically change the business of buying and owning cars in rural areas, but, thanks to influences like the sharing economy, it could fundamentally reshape urban transportation in cities as diverse as Miami, Dubai and Helsinki.

Uber and other mobility-on-demand players have experienced impressive growth and made headline news. Imagine how much more dramatic the impact will be when the driver, who represents approximately half the cost per kilometer, is taken out of the equation. Whether a fleet of shared, self-driving taxis is run by Uber, Google, General Motors or someone else, the low cost could be compelling enough to make private car ownership redundant for many city inhabitants.

Concurrent to our consumer survey, the World Economic Forum undertook qualitative and quantitative research with city transit authorities and policy makers in 12 cities, including Pittsburgh, Amsterdam and New York. Although not a statistically representative survey, several general conclusions jump out from this research.

As indicated in the graph below, almost half of the city authorities we interviewed expect full autonomy to arrive before 2020, significantly sooner than most industry players are willing to commit to. On the other hand, a recent study by the National League of Cities revealed that only 6% of cities’ long range transport plans have considered the potential effect of driverless technology. If cities expect the technology to arrive so quickly, all players need to start studying the impact of full autonomy, including shared, self-driving taxis, will have on the city transport landscape. 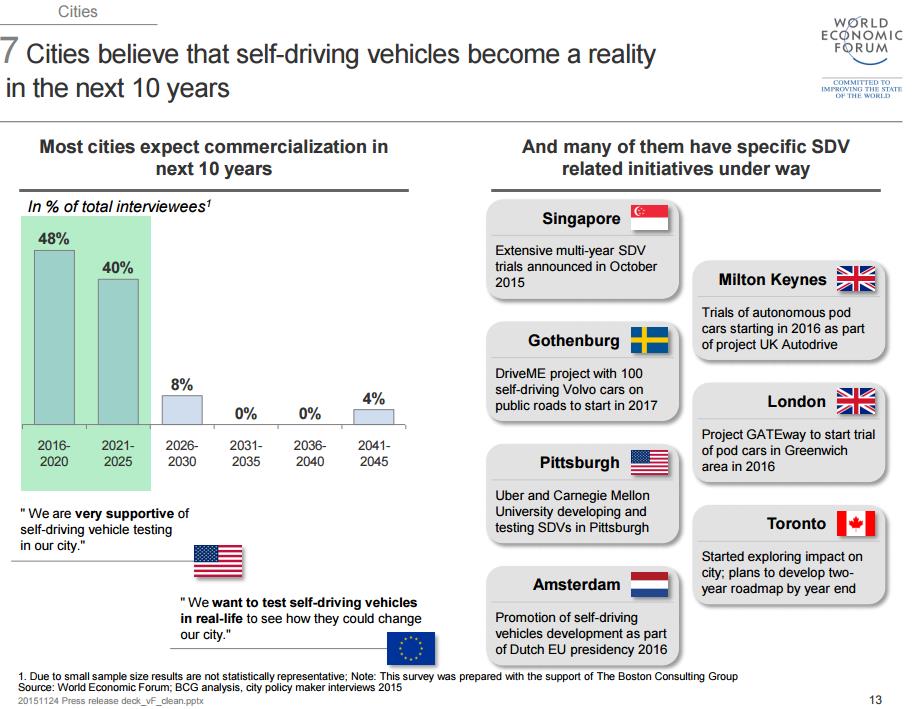 Another surprise is that cities see consumer acceptance and technology as the biggest hurdles standing in the way of this eventuality, rather than regulatory and governance issues, a mirror image of how most industry players see the issue.

Despite several barriers, the good news is that cities and the private sector can start working together towards this future, irrespective of whether you think it is five years away or 25. Once cities start crafting transport visions that take into account the impact of self-driving technology, a few things should become clearer.

The first is that launching self-driving pilot models now is feasible and will dramatically increase confidence in both the public and private sector around what is required to make the technology a success. Today, over a dozen cities have pilot schemes underway, including Singapore and Gothenburg, each testing different ideas at various levels of sophistication.

The second, equally important conclusion, is that many of the building blocks for an eventual self-driving system are already here and aren’t yet fully embraced. New mobility models such as car sharing, bike sharing, and smart parking not only help improve mobility today, but can also help answer critical questions about the future roll-out of self-driving vehicles in cities. Wondering how to allocate public space for driverless taxis to recharge? That question is already being answered by cities that embrace car sharing. Worried about voter concerns with cyber-security in a self-driving world? Cities embracing smart parking are already providing us with clues.

The notion of the fully self-driving car is no longer theoretical; from a city planning perspective, it’s right around the corner. Now is the time for further public-private cooperation on pilots as part of a push, at federal, city and industry levels, towards understanding how to make it happen.

Self-Driving Vehicles in an Urban Context is available here.

Image: An autonomous self-driving vehicle goes onto the road during a demonstration at one-north business park in Singapore October 12, 2015. REUTERS/Edgar Su

What is hybrid autonomous manufacturing and how can it benefit companies?

This method uses multiple processes, without human intervention and can be used in many areas, such as the creation of materials to treat bone fractures.

Could all your digital photos be stored as DNA?

Chatbots are on the rise. This approach accounts for their risks.

By 2025 the IT industry could use 20% of all electricity produced. How can we make it sustainable?