Which countries have the largest immigrant populations?

Luxembourg has the highest immigrant population of OECD countries, according to data compiled by the organisation.

The OECD gathered the data as part of its Indicators of Immigrant Integration 2015 report. For the purposes of the report, immigrants were defined as anyone not born in the country. This allows for cross-country comparisons, since many nations differ in their own internal definitions.

Luxembourg’s immigrant population stands at 37.3%, but if you include residents who are either foreign-born or who have at least one parent born abroad, the small European nation comes second to Israel. 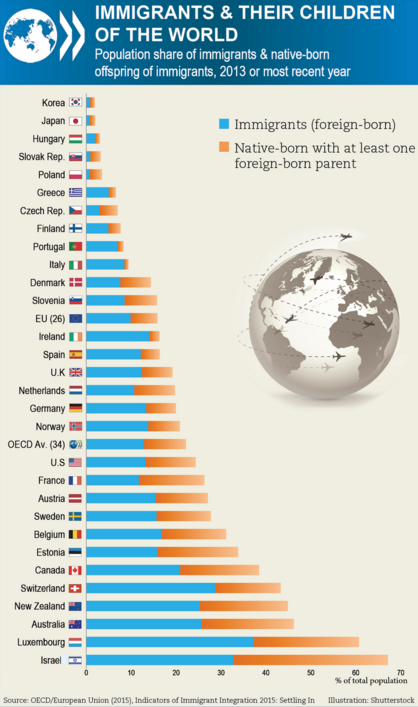 The chart highlights some interesting results, with certain nations reporting a high proportion of immigrants (as compared to residents with at least one foreign-born parent) – Portugal, Italy and Ireland, for example. In contrast, other nations report a much lower proportion of immigrants, notably in the east of Europe: the Czech Republic, Poland and the Slovak Republic.

The report also highlights major global differences in immigrant populations, with Japan and South Korea both reporting very low numbers compared with much of Europe.

The report emphasizes the challenges faced by immigrants in countries around the world, as they attempt to adapt to a new culture. Hurdles they may face include being schooled in a different education system and potentially learning a foreign language.

Have you read?
Which countries view immigration most favourably?
Why we shouldn’t confuse refugees with terrorists
Europe’s refugee crisis explained