Why is the U.S. economy not growing fast enough?

Compared to the robust growth rates of the boom decades in the years from the end of World War II until 1973, the U.S. economy has witnessed a stubborn stagnation. At the core of this stagnation lies a slowdown in the rates of productivity, which is the beating pulse of a dynamic economy and an output per hour of growth by workers in a country. Productivity is the stepping-stone to a great economic leap forward, it’s where Adam Smith begins his book The Wealth of Nations.

The U.S. economy has experienced a particular kind of trouble for the last 40 years. With the productive sector of the economy – manufacturing – shrinking and with productivity rates slowing down by the late 1970s, Larry Summers – the former Treasury Secretary – rightly named the current period the era of “secular stagnation”. The term is meant to imply that the kind of sluggish economic performance we are seeing is not being replaced with growth and dynamism. Adding to the sense of drama is labour wages, which have been flattened to a zero growth rate since the 1970s, and wages for male workers, discounted for inflation, are below 1973 rates. Additionally, the average household income grew by only 7% a year since the late 1970s, which stands in glaring contrast to 100% household income growth in the golden age, post World War II, from 1956 to 1973.

It must be emphasized that secular stagnation is not due to a lack of innovation and technology. In fact, capitalism is an economic system driven by technical change. The roots of the current stagnation should be searched for in the recent trends of the U.S. economy, including the decline of manufacturing and rise of finance. The productive sectors (manufacturing and industrial) have given way to less productive sectors such as finance and information technology. A recent study by Stephen Cecchetti from Brandeis University shows in great detail that the growth of Wall Street actually undermines the growth of productivity in the economy as a whole. In an economy that allows for a pattern of accumulation in which profits accrue more through financial channels as opposed to trade and commodity production, it is no wonder that productivity rates are stagnating. 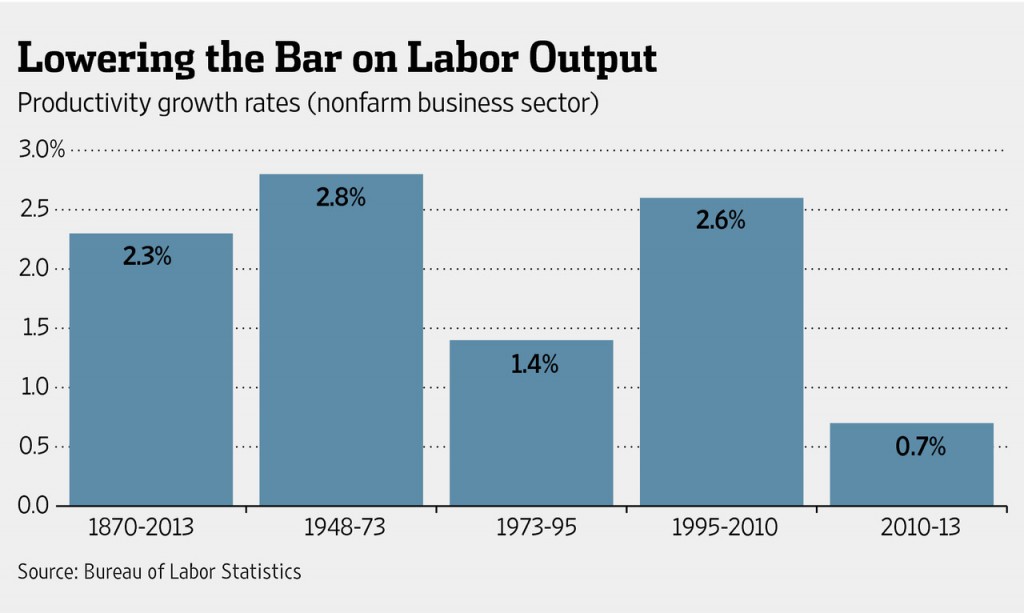 It should also be noted that productivity slowed long before the 2007-2008 financial crunch. It is by no means a consequence of the recent economic depression. Quite conversely, the recent economic depression is partly the consequence of the slowdown in productivity rates and a lack of dynamism. Since 1973, however, the exceptional pace of productivity growth has disappeared, with the exception of an interregnum in the early 1990s during the information technology boom, which proved to be fleeting.

Is there a way out of economic depression?

Can the state revive productivity, improve living standards, raise the income of the middle class and help the poor with the tools that it has at its disposal? The US economy is burdened by the lack of public investment in physical infrastructure. Public investment by federal governments induces higher rates of productivity and growth by allotting resources to the basic physical infrastructure (such as roads, bridges, rail lines, airports, and water distribution), as well as scientific research, innovation, and other means of human development (such as schools, universities, and job training centres). The reason that public investment in those areas induces higher rates of growth and productivity is because it accrues over a wide range of individuals and businesses.

Reviving growth in the U.S. economy via investment in physical infrastructure seems to be a viable option. But while public investment is proven effective to kindle growth and dynamism, it is hampered by enormous political wrangles and bureaucratic paralysis. There is every reason to spend on the defunct and outmoded physical infrastructure as well as education and healthcare systems in the United States, but politicians simply don’t seem interested in those kinds of investments. There is an abundance of research which shows that investment in infrastructure boosts not only productivity but also provides incentives for growth-inducing private entrepreneurship, which itself generates employment opportunities.

Those findings strongly suggest that the United States should opt for more public investment. They should also provide incentives for the entrepreneurs to invest in the productive sector of the economy, manufacturing, and prevent its outsourcing. A significant increase in public investment would not only boost the job market in the short run, but also contribute to the development of human capital by providing more sophisticated educational and health systems.

In short, America’s stock of human and physical capital is the most conspicuous representation of the nation’s wealth. It is this stock of skillful human labor as well as physical infrastructure which allowed for the U.S. economy to demonstrate the most spectacular growth rates in the twentieth century.

This lesson has been lost in the past four decades and our politicians continuously refrain from focusing on public investment as a safe path to economic growth. In the halcyon days of high productivity rates in the information and communication technology sector during the early 1990s, there was a strong belief that the private sector could sustain productivity by means of private investment in the IT sector. And, public investment simply didn’t seem to be a healthy strategy to boost productivity. But now that productivity rates in the IT sector also seems to be fading, it is safe to say that the road back to growth rates that the U.S. economy enjoyed in the post-World War II era requires a substantial increase in public investment.

Author: Masoud Movahed is a Researcher in development economics at New York University. He contributes to, among others, Harvard Economics Review, Yale Journal of International Affairs and Al Jazeera English.

Image: A Specialist trader watches his chart while working on the floor of the New York Stock Exchange July 8, 2014. REUTERS/Brendan McDermid.