7 major advancements in gene editing in 2015

Immunity from COVID-19 could last for up to 7 months, according to a new study

This article is published in collaboration with Business Insider.

Gene editing was one of the most talked-about topics of 2015, and rightly so.

One technique in particular,known as CRISPR/Cas9, has made it possible to quickly and precisely edit genes by cutting and pasting bits of DNA, opening the door to curing genetic defects and preventing the spread of disease. It’s already been used in everything from mice to human embryos.

Meanwhile, other gene editing techniques are already being developed to treat cancer and other diseases.

We compiled a list of some of the biggest advances in gene editing made this year.

Here are a few:

In April a team of Chinese scientists made headlines when they used CRISPR in human embryos to prevent a blood disorder called beta thalessemia, which got a lot of people fired up over whether the technology should be used in humans.

In early December, a group of experts that met in Washington decided that human gene editingshould not be banned completely, but should not be used on embryos until it’s proven safe.

And in late December, Congress passed a budget that makes it illegal to use federal funds to created genetically modified embryos, although some experts say this will only encourage companies to fund the research.

Meanwhile, scientists are also looking into how they can use gene editing to fix the shortage of organs for transplants. In October, Nature News reported that a group of Harvard scientists was using CRISPR in pig embryos to make their organs more compatible to transplant into humans.

Biologist George Church and his colleagues tweaked more than 60 genes in the pigs to get rid of harmful viruses that lurk in the animals’ DNA and could make humans sick. Church co-founded a company called eGenesis in Boston that is now trying to figure out how to make the process cheaper.

And it’s not just pigs. Also in October, MIT Technology Review reported that another group of researchers in China had used CRISPR gene editing to create beagles with twice the normal amount of muscle. Specifically, the researchers edited dog embryos to cut out the myostatin gene, which keeps muscle cells from developing. When the gene was inactive, the animals could produce more muscle.

Although the first attempt was unsuccessful, the second attempt produced two dogs, a male named Hercules and a female named Tiangou (after China’s mythical “heaven dog”), with up to twice the muscle mass of their littermates. 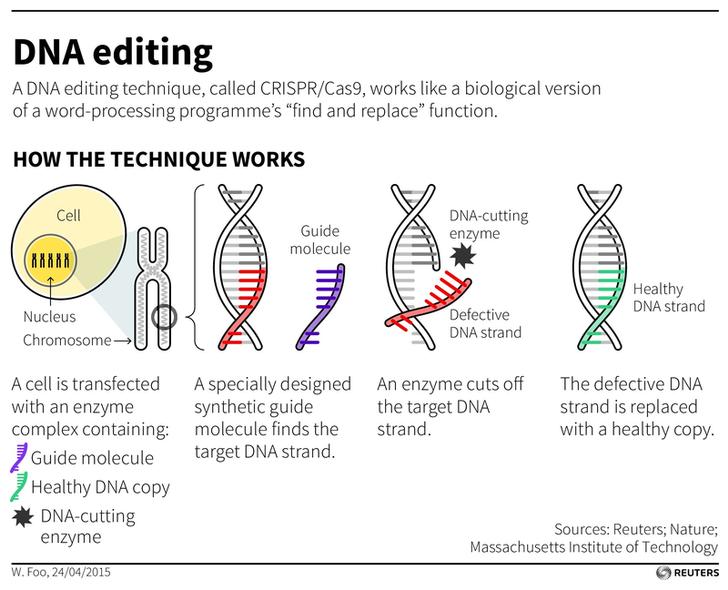 Gene editing isn’t only limited to curing genetic defects. It can also be used to make genetic changes spread rapidly through an entire population — something known as gene drive — to, say, prevent mosquitoes from spreading a disease.

In late November, a group of scientists at UC San Diego used CRISPR to make a population of mosquitoes resistant to spreading malaria, a disease that killed more than half a million people last year.

And just two weeks later, scientists in London announced they had modified another type of mosquito — which is responsible for 90% of malaria deaths — to stop it from spreading the disease, STAT News reported.

In addition to its many clinical applications, gene editing is also helping scientists understand our basic biology. In October, scientists used CRISPR to identify the set of essential genes a human cancer cell needs to survive.

These genes encode proteins involved in fundamental processes that keep our cells healthy, and are rarely mutated in nature. The findings may also guide scientists in finding a cancer’s weak points, where it is most vulnerable to attack.

CRISPR is certainly an effective way to edit a gene, but it’s not the only game in town.

A treatment for leukemia

Scientists are already using gene editing to treat diseases in people, a form of gene therapy. In November, as STAT News reported, doctors used another technique known as TALENs to treat a young girl’s leukemia, and she is now in remission. By tweaking special cells in her body’s immune system, they were able to send them on a search-and-destroy mission to target cancerous tumor cells.

In September, Nature News reported that a group of researchers at China’s genomics institute BGI was creatinggenetically-engineered “micropigs” to sell as pets.

They used the TALEN method gene editing to modify Bama pigs, which are already only about half as big as regular farm pigs, to inactivate a gene that controls growth. Without that gene, the pigs didn’t grow to a normal size.

While most of the focus on gene editing has been on human therapies, the techniques can also be used to modify plants, including the food we eat. For example, it might be possible to engineer hypo-allergenic peanuts, as MIT Technology Review reported in October.

These are just some of the creative ways scientists have used gene editing, but we can probably expect many more in the coming years.

Author: Tanya is a science reporter at Business Insider, specializing in the intersection between biology and tech.

More from the Business Insider:

Stock markets are reaching new highs amidst COVID-19. Some of the key indicators of this include the businesses' ability to be agile, overall size, as well as its industry.

According to the IMF's Regional Economic Outlook, Central Asia and the Middle East are faced with an unprecedented economic downturn, but the right policies can help.

Unsuited to the new normal? Formal fashion hangs by a thread