7 stumbling blocks to a climate deal in Paris

This article is published in collaboration with Reuters Media Express.

The new text is 27 pages, against 29 on Wednesday.

Almost 200 nations are meeting in Paris, seeking a turning point away from an increasing reliance on fossil fuels since the Industrial Revolution. 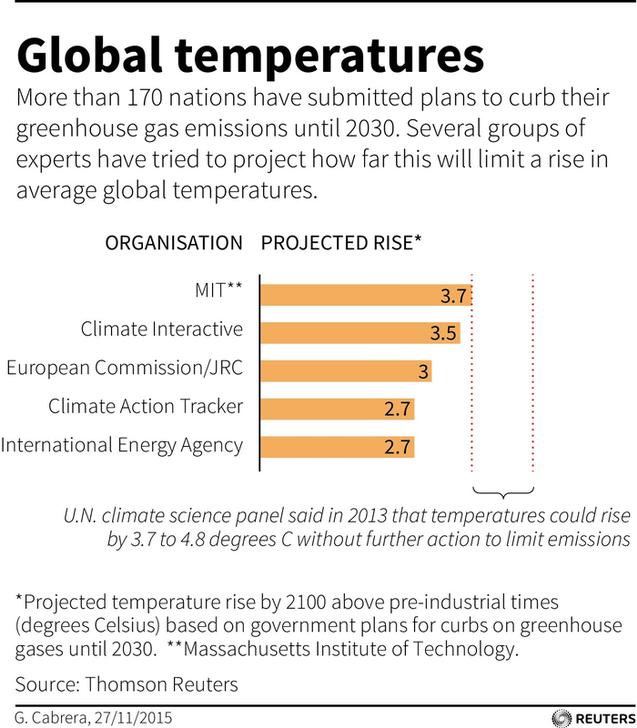 The meeting is due to finish on Friday, Dec. 11, but is now running longer.

Following are details of the new draft:

Developed nations promised in 2009 to mobilise $100 billion a year by 2020 from both public and private sources to help developing nations limit their greenhouse gas emissions and adapt to more floods, heat waves and rising sea levels.

The new text says nations will mobilise finance beyond a floor of $100 billion per year, to be mobilised by developed countries.

The phrasing is a shift from a text on Wednesday which gave three options: to hold temperature rises below 2 degrees, well below 2 degrees or below 1.5 degrees.

Options have also been removed from aspirations on vaguer long-term goals.

China and India, heavily dependent on coal, are among those reluctant to set clear dates for giving up fossil fuels they see as vital to lifting millions from poverty. Saudi Arabia, whose economy also depends on oil, is also a clear opponent.

Debate on loss and damage is unresolved.

Developing nations want a long-term mechanism to help them cope with loss and damage from disasters such as typhoons or the impacts of a creeping rise of sea level rise.

All governments set up a loss and damage mechanism in 2013, but it has so far done little.

The new text recognises the importance of averting, minimising and addressing loss and damage, but leaves divergent options under discussion, including one that leaves out the mechanism.

The United Nations says promises by 186 nations to curb greenhouse gas emissions beyond 2020, already made, are too weak to limit rising temperatures to an agreed 2 degrees Celsius (3.6 Fahrenheit) above pre-industrial times.

That means there will have to be a system to ratchet up action, but it is poorly defined.

The draft suggest that countries should take stock of efforts in 2019, and then follow up with a more formal stocktake in 2023 to guide countries in updating their pledges, and then every five years thereafter.

The draft contains no explicit mention of carbon markets, nor of the possibility of carbon penalties for aviation and shipping. It does, however, include a reference to “use of internationally transferred emission reductions”, which carbon analysts say can be read as markets.

Developing nations say that rich nations, as defined in a 1992 Convention, should continue to take the lead in cutting emissions and providing finance. Developed nations argue that many of these countries, such as Singapore and South Korea, have since become wealthy and should do more.

The new text says developed nations should take the lead in finding money from a wide variety of sources, as part of a shared effort by all parties.

All nations agreed in 2011 that the Paris deal will have some form of “legal force”. The draft leaves the issue unresolved, saying in line with previous texts that it will be either a “protocol, another legal instrument or an agreed outcome with legal force”.

Image: Christopher Loeak, President of the Republic of the Marshall Islands delivers a speech for the opening day of the World Climate Change Conference 2015 (COP21) at Le Bourget, near Paris.  REUTERS/Stephane Mahe

With a record delegation, Indian participants and political leaders made a strong presence at this year's annual meeting in Davos. On the agenda were key global challenges like the energy...