How inequality is killing the American middle class

This week, Angus Deaton will receive the Nobel Memorial Prize in Economics “for his analysis of consumption, poverty, and welfare.” Deservedly so. Indeed, soon after the award was announced in October, Deaton published some startling work with Ann Case in the Proceedings of the National Academy of Sciences – research that is at least as newsworthy as the Nobel ceremony.

Analyzing a vast amount of data about health and deaths among Americans, Case and Deaton showed declining life expectancy and health for middle-aged white Americans, especially those with a high school education or less. Among the causes were suicide, drugs, and alcoholism.

America prides itself on being one of the world’s most prosperous countries, and can boast that in every recent year except one (2009) per capita GDP has increased. And a sign of prosperity is supposed to be good health and longevity. But, while the US spends more money per capita on medical care than almost any other country (and more as a percentage of GDP), it is far from topping the world in life expectancy. France, for example, spends less than 12% of its GDP on medical care, compared to 17% in the US. Yet Americans can expect to live three full years less than the French.

For years, many Americans explained away this gap. The US is a more heterogeneous society, they argued, and the gap supposedly reflected the huge difference in average life expectancy between African Americans and white Americans. 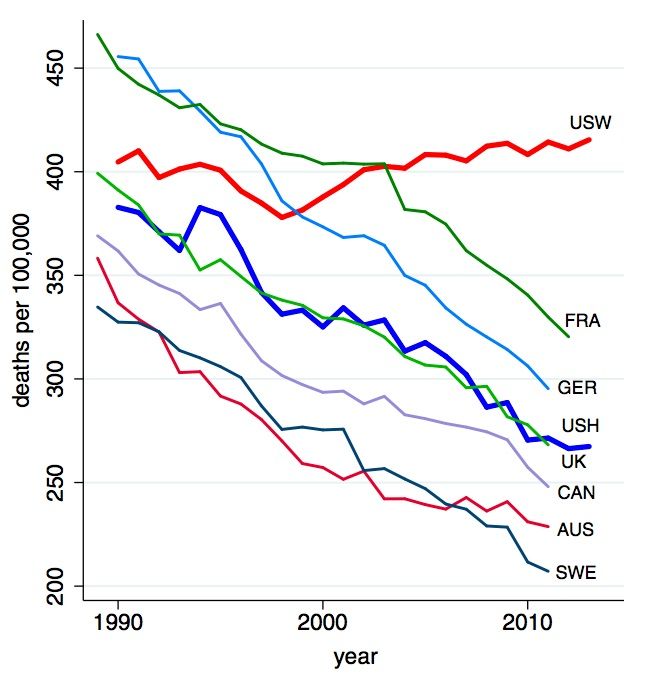 The racial gap in health is, of course, all too real. According to a study published in 2014, life expectancy for African Americans is some four years lower for women and more than five years lower for men, relative to whites. This disparity, however, is hardly just an innocuous result of a more heterogeneous society. It is a symptom of America’s disgrace: pervasive discrimination against African Americans, reflected in median household income that is less than 60% that of white households. The effects of lower income are exacerbated by the fact that the US is the only advanced country not to recognize access to health care as a basic right.

Some white Americans, however, have attempted to shift the blame for dying younger to African Americans themselves, citing their “lifestyles.” It is perhaps true that unhealthy habits are more concentrated among poor Americans, a disproportionate number of whom are black. But these habits themselves are a consequence of economic conditions, not to mention the stresses of racism.

The Case-Deaton results show that such theories will no longer do. America is becoming a more divided society – divided not only between whites and African Americans, but also between the 1% and the rest, and between the highly educated and the less educated, regardless of race. And the gap can now be measured not just in wages, but also in early deaths. White Americans, too, are dying earlier as their incomes decline.

This evidence is hardly a shock to those of us studying inequality in America. The median income of a full-time male employee is lower than it was 40 years ago. Wages of male high school graduates have plummeted by some 19% in the period studied by Case and Deaton.

To stay above water, many Americans borrowed from banks at usurious interest rates. In 2005, President George W. Bush’s administration made it far more difficult for households to declare bankruptcy and write off debt. Then came the financial crisis, which cost millions of Americans their jobs and homes. When unemployment insurance, designed for short-term bouts of joblessness in a full-employment world, ran out, they were left to fend for themselves, with no safety net (beyond food stamps), while the government bailed out the banks that had caused the crisis.

The basic perquisites of a middle-class life were increasingly beyond the reach of a growing share of Americans. The Great Recession had shown their vulnerability. Those who had invested in the stock market saw much of their wealth wiped out; those who had put their money in safe government bonds saw retirement income diminish to near zero, as the Fed relentlessly drove down both short- and long-term interest rates. With college tuition soaring, the only way their children could get the education that would provide a modicum of hope was to borrow; but, with education loans virtually never dischargeable, student debt seemed even worse than other forms of debt.

There was no way that this mounting financial pressure could not have placed middle-class Americans and their families under greater stress. And it is not surprising that this has been reflected in higher rates of drug abuse, alcoholism, and suicide.

I was chief economist of the World Bank in the late 1990s, when we began to receive similarly depressing news from Russia. Our data showed that GDP had fallen some 30% since the collapse of the Soviet Union. But we weren’t confident in our measurements. Data showing that male life expectancy was declining, even as it was increasing in the rest of the world, confirmed the impression that things were not going very well in Russia, especially outside of the major cities.

The international Commission on the Measurement of Economic Performance and Social Progress, which I co-chaired and on which Deaton served, had earlier emphasized that GDP often is not a good measure of a society’s wellbeing. These new data on white Americans’ declining health status confirms this conclusion. The world’s quintessential middle-class society is on the way to becoming its first former middle-class society.

Author: Joseph E. Stiglitz is a Nobel laureate in economics and University Professor at Columbia University.

Image: The Washington Monument is seen with an American flag flying in the foreground in Washington. REUTERS/Molly Riley.