Book Review: The Road to Recovery

COVID-19: What you need to know about coronavirus on 1 July 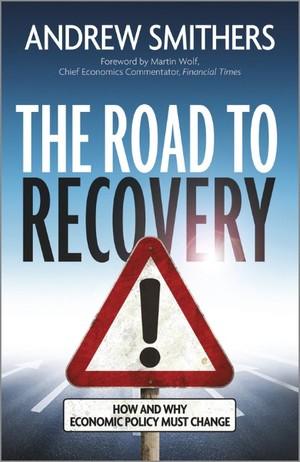 Andrew Smithers, a doyen of City economists, has the unusual characteristic of independence of mind. He has written a fascinating book about the current state of the UK and other developed economies, with a distinctive focus on what he sees as key issues. This means that whether you end up agreeing with him or not – I suspect many readers will not, so far does he depart from conventional wisdom – he is well worth reading.

I happen to agree with him strongly about what might be his most contentious argument. This concerns the effect of executive bonuses, which create a strong incentive for the people running businesses to take actions that will increase the share price in the short term no matter what the consequences for the business in the long term. Businesses have become more leveraged and are more likely to return cash to shareholders, boosting the share price, than to invest in long-term projects or products.

Smithers writes: “Over the past 20 years there has been a profound change in the way that management is paid. Basic salaries have shot up but bonuses have increased even faster, to the point where they dominate the incomes of senior people running firms. The average length of time for which managers hold their jobs has fallen.” His opening chapter links the strong incentive management has to prefer buy-backs to investing in the business with an uncertain result, and traces the aggregate effect on investment and the financial balances of the government, corporate and household sectors. I think he makes a convincing case that, at least in the US and UK, for which he presents the data, bonus culture does help explain the anaemic character of the economic recovery.

The book goes on to explain why the problems facing at least these economies, and probably other developed economies too, are structural, not cyclical. It notes that there has been a combination of higher than expected inflation despite inflationary expectations among the public staying low; lower than expected investment despite low interest rates and a high (aggregate) profit margin; and higher than expected employment. Much has been made of the “productivity puzzle”, as the arithmetic implies a surprisingly low ratio of output to employment.

Smithers’ argument is that corporate executives perceive the cost of capital to be high relative to the cost of labour, because they are looking through the prism of the share price and their stock options. They are taking on debt because it is cheaper than equity (in their eyes) and using their cash flow to buy back shares, too. The figures are startling: “The proportion of cash being generated from depreciation and profits after tax that is currently being invested in plant and equipment is the lowest in the US that it has been in the post-war era, and the proportion being returned to shareholders is nearly 55 per cent.” These are staggering figures, and the same is true of other economies, the book suggests.

Smithers concludes that central banks are ignoring the evidence of a structural problem, and their continuing stimulatory policies will run the risk of rising inflation. This might seem unduly pessimistic with actual inflation rates remaining rather low, but then it is in the nature of inflationary spirals to start small and snowball unexpectedly. Still, he writes, “Owing, perhaps, to my habitual optimism, which perceptive readers will have noted, I think that hyperinflation is unlikely.” Tongue firmly in cheek, here, I think.

When it comes to fiscal policy, the book argues that the conventional response – run a bigger government budget deficit to offset the surplus of intended savings over planned investment in the private sector – is correct; but that a fiscal stimulus will only generate a recovery if the problem is a cyclical one. If it is structural, as argued here, it will amount to pouring water into a leaky bucket.

A subsequent chapter looks at the continuing fragility of the banking sector. The book joins others, notably The Bankers’ New Clothes by Anat Admati and Martin Hellwig, in arguing that banks need to raise more equity by retaining earnings rather than paying dividends, and that the “too big to fail” banks need to be broken into smaller units. The evidence of excessive risk-taking and reduced competition in the finance sector ahead of the crisis is clearly illustrated in the charts in this chapter (and it is a great strength of the book that it includes a large number of charts to put the arguments into pictures). There is a chapter on global imbalances that also covers relatively familiar territory.

The book ends with an afterword on economic theory, which the author blames for current economic policies he sees as “both inadequate and dangerous”. Policy-makers, seeing that their actions are not leading to recovery, are increasing the dose – which is either futile or dangerous. This is because the structural problems so clear to Smithers are hidden from the eyes of others by the conventional framework of macroeconomic theory. “The crisis, the recession and the weakness of the recovery have all caused grief and suffering to many and all have been unnecessary as well as disappointing. They were all caused by poor policies based on inadequate economic theories.”

It is evidence for this view that almost nobody discusses the incentives that corporate bonus structures create for share buy-backs and short-termism in business decisions, or the combination of high leverage and share buy-backs. Of course, corporate executives will understandably dismiss the idea that their remuneration is a key cause of the weakness of the recovery, but economists and policy-makers have been silent about it too. It is surely plausible that this is because it lies outside their mental model of how the economy works, and the tramlines that economic models create for policy decisions.

So any senior executives benefiting from an incentive plan, who pride themselves on being open to evidence and new ideas, or on being an independent spirit rather than one of the herd, should not dismiss The Road to Recovery, but rather take up the gauntlet flung down by Smithers and read what he has to say.

Author: Diane Coyle runs the consultancy Enlightenment Economics. She is Vice-Chair of the BBC Trust and was a member of the Migration Advisory Committee from 2007-2012, and a member of the Competition Commission from 2001-2009.

Image: A worker carries a shovel as he walks on a road near a steel factory in Beijing April 1, 2013. REUTERS/Kim Kyung-Hoon

Governments are boosting spending to support those who have been most affected by COVID-19. The pandemic could lead to a new consensus on the welfare state.

You’ve got money: Mobile payments help people during the pandemic

IMF: These 3 charts show how lockdown has affected the global economy