Why you need to restore confidence to recover from a recession

Macroeconomic activity and economic confidence seem closely linked. Figure 1 shows the relationship between the cyclical component of GDP and a popular measure of economic confidence, the University of Michigan Consumer Sentiment Index. There has not been a single instance of a recession during this period that has not been preceded-accompanied by a significant deterioration in confidence. 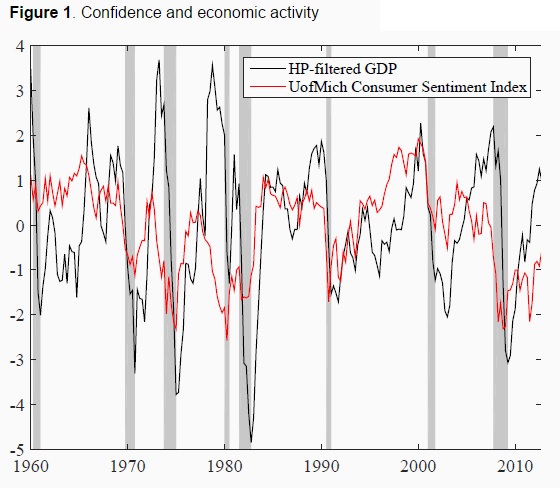 The popular press and economic commentators often invoke this relationship when reporting on macroeconomic developments. For example, they attribute recessions to declines in aggregate demand that are triggered by sagging confidence. They link reductions in hiring and investment by firms to their pessimism about the demand for their products; and reduced spending by consumers to their pessimism about their job and income prospects. Consumers’ and business’ confidence indexes move together, indicating that the pessimism of one class of agents often appears to justify, if not feed, that of other.

A literature in macroeconomics that blossomed in the late 80s and the 90s sought to rationalise this close link between market psychology and macroeconomic activity within a class of models that featured multiple equilibria and self-fulfilling fluctuations (e.g., Cooper and John 1988, Benhabib and Farmer 1999). The appealing feature of these models was that they could accommodate coordination failures and movements in economic confidence without any commensurate movements in ‘hard’ fundamentals, such as peoples’ abilities and tastes or the economy’s know-how, or expectations of such fundamentals. Yet, these models are not part of the core chute of quantitative macroeconomic models used nowadays to study the data and guide macroeconomic policy. This probably reflects the fact that, although equilibrium multiplicity is an interesting theoretical concept that highlights the perils of coordination failure, it also poses serious difficulties when evaluating a model’s empirical performance or when seeking to guide policymaking.

Mainstream macroeconomic models have little use ‘for confidence’

Mainstream dynamic stochastic general equilibrium (DSGE) models, on the other hand, simply opt to ignore the possibility of either coordination failure or extrinsic shifts in market sentiment. By imposing that economic agents share a single, common belief about the current state and the future prospects of the economy (e.g., agents never disagree with one another on how deep a recession might be, how long the recovery may take, or when the next boom is coming), these models are built on the convenient but unrealistic assumption that the millions of firms and consumers, whose joint behaviour determines macroeconomic activity, can coordinate their actions in a perfectly orchestrated manner. In so doing, these models also take a narrow view of the notions of confidence and market psychology; those are linked exclusively to uncertainty about fundamentals such as technology and policy, with uncertainty about the actions of others and the possibility of coordination failures being ruled out. We find this both limiting and counterproductive.

The paper contains contributions on both the methodological and applied front.

The key mechanism of our model is encapsulated by the following narrative. Consider a negative confidence shock represented by the belief that other agents have developed a pessimistic outlook about the short-term prospects of the economy (with the medium- to long-term prospects remaining invariant). As firms expect the demand for their products to be low for the next few quarters, they too find it optimal to lower their own demand for labour and capital. Households, on their part, experience a transitory fall in wages and total income. They react by working less and by cutting down both consumption and saving. Variation in confidence, therefore, leads to a strong co-movement between employment, output, consumption, and investment at the business-cycle frequencies, without commensurate movements in labour productivity, TFP, or the relative price of investment at any frequency. It is precisely these co-movement patterns that represent the key properties of observed business cycles and that existing structural mechanisms have difficulty accounting for.

Along with capturing these important features of the data, our mechanism offers a novel formalisation of the notion of fluctuations in ‘aggregate demand’. In spite of its popularity and widespread use, aggregate demand is a fuzzy concept that is difficult to nail down in general equilibrium models. Our model links aggregate demand and its variation to the level and variation of confidence (a barometer of the beliefs held by economic actors about other actors’ outlook on the economy) and, unlike the New Keynesian model, it does not require either nominal rigidities or frictions in the conduct of monetary policy for demand to matter for business cycles.

In addition, our model-based confidence concept looks remarkably similar to its empirical counterpart. We illustrate this in Figure 2, by comparing the University of Michigan Consumer Sentiment Index to the confidence shock in our model, which is itself estimated on the basis of standard macroeconomic series alone, without any information about that index. We view this coincidence as additional validation of our mechanism and of its interpretation.

Figure 2. Confidence in the model and in the data

Recessions under the lenses of the new theory

Our approach helps revisit the interpretation of actual recessions. To account for them, New Keynesian models rely on a level of nominal rigidity which seems hard to reconcile with menu-cost models and micro evidence on price-setting behaviour. They also require certain kinds of adjustment costs that have dubious micro-foundations. By contrast, our approach offers a structural interpretation of the business cycle that is not unduly sensitive to either the degree of nominal rigidity or the aforementioned modelling features. In particular, it attributes economic downturns and the possibility of sluggish recoveries to, at least in part, coordination failures and to a non-monetary form of ‘deficient demand’. It can thus account for the fact that the Great Recession was not accompanied by a ‘great deflation’, as one would have expected on the basis of the New Keynesian model; it can accommodate the view that depressed consumer spending is at the core of this recession by linking the former to the observed large and persistent drop in confidence; and it provides a formal foundation for the argument that the recovery hinges on ‘restoring confidence in the economy’.

Adjusting the relationship between the state and private sector in Gulf countries will help them recover more effectively from the pandemic, write two experts.