What’s at stake: Neo-Fisherism is on the blogs again. The idea that low interest rates are deflationary – that we’ve had the sign on monetary policy wrong! – started as a fringe theory on the corners of the blogosphere 3 years ago. Michael Woodford has now confirmed that modern theory, indeed, implies the Neo-Fisherian view when people’s expectations are infinitely rational. For Woodford, this is however a paradox of perfect foresight analysis, rather than something actually relevant for monetary policy.

Noah Smith writes that over the last three years, a quiet rebellion seems to have sprung up in macroeconomic circles. For some time, it was limited to a few whispers, a couple of papers, and the odd blog post or dinner speech, but it represents a striking break from conventional thinking and is being now addressed by leading New Keynesian authors. The rebellious idea is that low interest rates cause deflation, and high interest rates cause inflation. Noah Smith writes that the Neo-Fisherite idea doesn’t just discount the effectiveness of monetary policy (like RBC models do, or like the MMT people do) – it stands that whole monetary policy universe on its head. If the Neo-Fisherites are right, then not only is the Fed massively confused about what it’s doing, but much of the private sector may be reacting in the wrong way to monetary policy shifts.

Tony Yates writes that this discussion is not of purely academic interest, though it sounds nerdy and pointless.  Recall where it started. Core inflation is sliding in the US and the ECB. Does this mean that central banks should double down and keep rates lower for longer, or is low inflation, by contrast, caused by the low rates?  It’s pretty crucial to settle this. The discussion connects with recent efforts by central banks to stimulate the economy by announcing that rates will be held low, and fixed, at their natural floors, for long periods of time, before eventually rising, a policy they have dubbed ‘Forward Guidance’. 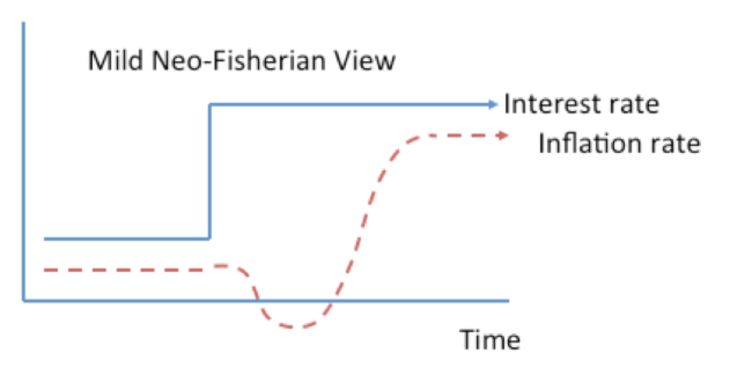 Noah Smith writes that the opening shot of the Neo-Fisherite rebellion was fired by Minneapolis Fed President Narayana Kocherlakota, in a speech in 2010. The second outbreak of the rebellion came when Steve Williamson wrote a paper in which QE is deflationary and the blog debates it sparkled. The third outbreak happened this month when Michael Woodford directly tackled the Neo-Fisherite view at the NBER Summer Institute.

2.     Can one maintain the orthodox view — that maintaining a lower nominal rate for longer should cause higher inflation and capacity utilization — while having a view of expectations that implies that central-bank commitments regarding future policy should have any effect?

Mariana Garcia Schmidt and Michael Woodford write that people are at least somewhat forward-looking; this is why commitments regarding future policy matter. The assumption of perfect foresight is nonetheless very strong — especially in the context of a novel policy regime, and the anticipated effects of policies announced for many quarters in future Perfect Foresight Equilibrium (PFE) predictions are relevant only to the extent that the PFE is the limit of an iterative process of belief revision and this process converges fast enough for the limit to well approximate the outcome from a finite degree of reflection. But if the process doesn’t converge, the PFE prediction may be quite different from what this model of expectation formation would imply, even if the process of reflection is carried quite far. When considering the case where interest rate is expected to be fixed indefinitely, the authors show that belief revision dynamics don’t converge.

How new technologies create a pathway to financial inclusion

A fair and equitable society relies on financial inclusion. Here's how new technologies and Islamic finance can help improve access to financial products.

How attention to data privacy will stabilize our financial markets

Can cryptocurrencies become friendlier to people and planet?