Why hasn’t US manufacturing recovered from the recession?

It took less than a year for America’s factory output to rebound from the 1991 recession. It took 3½ years to bounce back from the 2001 recession. Now, six years clear of the Great Recession, manufacturing output still hasn’t returned to the pre-crisis levels it reached in 2007, according to revised economic data from the Federal Reserve.

The downward revisions highlight the persistent weakness in a sector that President Obama has long called crucial to the health of the U.S. economy and the fate of the middle class. They track with the continued disappointing employment numbers for manufacturing, which since January 2013 has added fewer than half of the 1 million jobs that Obama promised the sector would create in his second term.

And they appear to reflect a deeper-than-previously-thought hit to defence and aerospace manufacturing as the result of Pentagon cuts and deficit-reduction measures Obama and Congress agreed to several years ago.

The revised data show manufacturing output grew by nearly 2 percentage points less than previously estimated in both 2012 and 2013, and by nearly 1 point less in 2014. Output in defense and space equipment was revised even more dramatically downward: by 4 points in 2012, 7 points in 2013 and 2.5 points in 2014. That coincides with the implementation of a series of curbs to the federal defense budget, including ones agreed to by Obama and congressional Republicans in a 2011 budget deal. 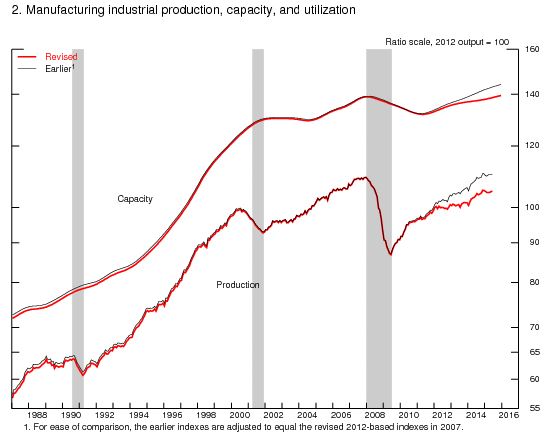 “You can clearly see the steep declines in defense and space equipment spending” in the revised data, said Chad Moutray, the chief economist at the National Association of Manufacturers. A coming next wave of scheduled cuts, he added, “will have even larger impacts on manufacturers, as subsequent cuts will dig deeper into the meat of key programs.”

Defense cuts only explain some of manufacturing’s historic sluggishness in this recovery. As Moutray notes, the economy has grown relatively slowly for the years following a recession. And as many other economists note, the United States is continuing to run a large trade deficit in manufacturing, an apparent result of a strong American dollar and weakened currencies in trading-partner nations such as Japan and China.

The large trade deficit “has to be a sign that imports have been denying domestic manufacturing many growth opportunities at home,” said Alan Tonelson, who writes frequently about trade and currency issues on his Reality Check blog, “and in the meantime, U.S.-based manufacturers haven’t been able to offset those losses with gains in foreign markets.”

Economists at the liberal Economic Policy Institute wrote in a research paperthis week that growing trade deficits and declining factory output are directly responsible for 5 million lost American manufacturing jobs over the past 15 years.

“A rising trade deficit indicates that U.S. manufacturers are losing business to manufacturing industries in other countries like China and Japan,” authors Will Kimball and Susan Balding wrote, “who manipulate their currency to make their goods cheaper and therefore more appealing to consumers in the United States and elsewhere. This leads to reduced demand for goods produced by U.S. manufacturers, both at home and abroad.”

Obama, meanwhile, continues to press the factory sector as a centerpiece of his economic agenda, though he opposed congressional efforts to add currency-related provisions to a recently passed bill that gave him more power to negotiate trade deals. Just this week, Treasury Secretary Jack Lew traveled to North Carolina to highlight what a news release called “the Obama Administration’s commitment to fostering economic growth through innovation and manufacturing.”

How widespread is coronavirus in New York? We need to know

‘If we do it right, we'll only have to do it once’ – Bill Gates calls for a nationwide US shutdown

A U.S. recession? Probably. Depression? Only if the virus is untamed