Is this the end of big oil?

Now that oil prices have settled into a long-term range of $30-50 per barrel (as described here a year ago), energy users everywhere are enjoying an annual income boost worth more than $2 trillion. The net result will almost certainly accelerate global growth, because the beneficiaries of this enormous income redistribution are mostly lower- and middle-income households that spend all they earn.

Of course, there will be some big losers – mainly governments in oil-producing countries, which will run down reserves and borrow in financial markets for as long as possible, rather than cut public spending. That, after all, is politicians’ preferred approach, especially when they are fighting wars, defying geopolitical pressures, or confronting popular revolts. 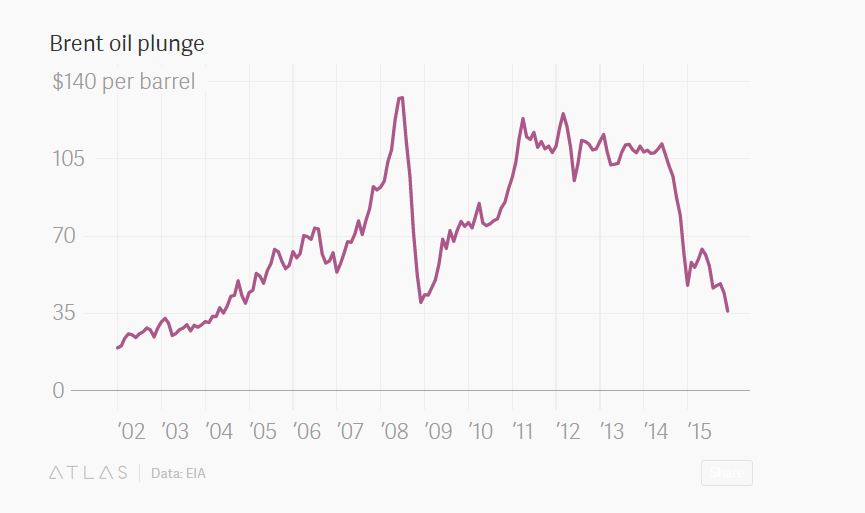 But not all producers will lose equally. One group really is cutting back sharply: Western oil companies, which have announced investment reductions worth about $200 billion this year. That has contributed to the weakness of stock markets worldwide; yet, paradoxically, oil companies’ shareholders could end up benefiting handsomely from the new era of cheap oil.

Just one condition must be met. The managements of leading energy companies must face economic reality and abandon their wasteful obsession with finding new oil. The 75 biggest oil companies are still investing more than $650 billion annually to find and extract fossil fuels in ever more challenging environments. This has been one of the greatest misallocations of capital in history – economically feasible only because of artificial monopoly prices.

But the monopoly has fallen on hard times. Assuming that a combination of shale development, environmental pressure, and advances in clean energy keep the OPEC cartel paralyzed, oil will now trade like any other commodity in a normal competitive market, as it did from 1986 to 2005. As investors appreciate this new reality, they will focus on a basic principle of economics: “marginal cost pricing.”

In a normal competitive market, prices will be set by the cost of producing an extra barrel from the cheapest oilfields with spare capacity. This means that all the reserves in Saudi Arabia, Iran, Iraq, Russia, and Central Asia would have to be fully developed and exhausted before anyone even bothered exploring under the Arctic ice cap or deep in the Gulf of Mexico or hundreds of miles off the Brazilian coast.

Of course, the real world is never as simple as an economics textbook. Geopolitical tensions, transport costs, and infrastructure bottlenecks mean that oil-consuming countries are willing to pay a premium for energy security, including the accumulation of strategic supplies on their own territory.

Nonetheless, with OPEC on the ropes, the broad principle applies: ExxonMobil, Shell, and BP can no longer hope to compete with Saudi, Iranian, or Russian companies, which now have exclusive access to reserves that can be extracted with nothing more sophisticated than nineteenth-century “nodding donkeys.” Iran, for example, claims to produce oil for only $1 a barrel. Its readily accessible reserves – second only in the Middle East to Saudi Arabia’s –will be rapidly developed once international economic sanctions are lifted.

For Western oil companies,the rational strategy will be to stop oil exploration and seek profits by providing equipment, geological knowhow, and new technologies such as hydraulic fracturing (“fracking”) to oil-producing countries. But their ultimate goal should be to sell their existing oil reserves as quickly as possible and distribute the resulting tsunami of cash to their shareholders until all of their low-cost oilfields run dry.

That is precisely the strategy of self-liquidation that tobacco companies used, to the benefit of their shareholders. If oil managements refuse to put themselves out of business in the same way, activist shareholders or corporate raiders could do it for them. If a consortium of private-equity investors raised the $118 billion needed to buy BP at its current share price, it could immediately start to liquidate 10.5 billion barrels of proven reserves worth over $360 billion, even at today’s “depressed” price of $36 a barrel.

There are two reasons why this has not happened – yet. Oil company managements still believe, with quasi-religious fervor, in perpetually rising demand and prices. So they prefer to waste money seeking new reserves instead of maximizing shareholders’ cash payouts. And they contemptuously dismiss the only other plausible strategy: an investment shift from oil exploration to new energy technologies that will eventually replace fossil fuels.

Redirecting just half the $50 billion that oil companies are likely to spend this year on exploring for new reserves would more than double the $10 billion for clean-energy research announced this month by 20 governments at the Paris climate-change conference. The financial returns from such investment would almost certainly be far higher than from oil exploration. Yet, as one BP director replied when I asked why his company continued to risk deep-water drilling, instead of investing in alternative energy: “We are a drilling business, and that is our expertise. Why should we spend our time and money competing in new technology with General Electric or Toshiba?”

As long as OPEC’s output restrictions and expansion of cheap Middle Eastern oilfields sheltered Western oil companies from marginal-cost pricing, such complacency was understandable. But the Saudis and other OPEC governments now seem to recognize that output restrictions merely cede market share to American frackers and other higher-cost producers, while environmental pressures and advances in clean energy transform much of their oil into a worthless “stranded asset” that can never be used or sold.

Mark Carney, Governor of the Bank of England, has warned that the stranded-asset problem could threaten global financial stability if the “carbon budgets” implied by global and regional climate deals render worthless fossil-fuel reserves that oil companies’ balance sheets currently value at trillions of dollars. This environmental pressure is now interacting with technological progress, reducing prices for solar energy to near-parity with fossil fuels.

As technology continues to improve and environmental restrictions tighten, it seems inevitable that much of the world’s proven oil reserves will be left where they are, like most of the world’s coal. Sheikh Zaki Yamani, the longtime Saudi oil minister, knew this back in the 1980s. “The Stone Age did not end,” he warned his compatriots, “because the cavemen ran out of stone.”

OPEC seems finally to have absorbed this message and realized that the Oil Age is ending. Western oil companies need to wake up to the same reality, stop exploring, and either innovate or liquidate.

India has some of the most aggressive renewable energy targets, but COVID-19 puts the model at risk. Will short-term needs distract from long-term goals?

The IEA projects that global energy use in 2020 will fall by 6% in what it calls a “historic shock to the entire energy world”.

These countries are leading the transition to sustainable energy

Morgan Bazilian and David Victor 13 May 2020

How green stimulus measures could fuel the decarbonization of shipping

Johannah Christensen and Anthony Hobley 12 May 2020