“I want to create tools that will allow medical personnel, both surgeons and non-surgeons, to perform procedures that in the past were restricted only to surgeons.” – Howie Choset

Robotics in medical care will open up a whole raft of diagnostics and therapies. The challenge is to create tools that will allow a person with access to less medical training and fewer resources to perform procedures that in the past only trained surgeons have been able to do.

Snake robots – robots built to resemble snakes in how they move ­– may be the perfect tool. Their many joints give them particular freedom and flexibility allowing them to navigate around organs through the body cavity towards their target. Equipped with a camera, and controlled externally by a computer and joy stick, these highly articulated machines can be maneuvered into position, reaching the organ with minimum damage to surrounding tissue.

Highly invasive surgery can now be performed with a simple incision, reducing trauma to the patient, and the impact and cost of long recovery times. The vision for this technology is to develop it to the point that many procedures can be offloaded from overworked and highly trained surgeons to non-surgeons who require less training and simpler infrastructure. This in turn will reduce the cost of the procedures, allowing them to be performed in a far wider range of healthcare environments. 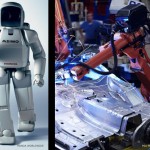 Howie Choset is a Professor at Carnegie Mellon University’s Robotics Institute.
Howie has been building robots since he was in high school in the 1980s and upon entering graduate school, developed a special interest in robots designed in a segmented fashion to mimic snake-like actuation and motion.

Rigid (they hold their own shape) yet flexible enough to move around obstacles, snake robots have the potential to contribute in a variety of search and rescue scenarios, extending the reach of rescue workers as they search for survivors in fragile and highly confined collapsed structures.

Recently, Howie’s work has extended to the search for archeological evidence of ancient Egyptian ships in caves off of the coast of the Red Sea.

Choset directs the Undergraduate Robotics Minor at Carnegie Mellon and teaches an overview course on Robotics which uses series of custom developed Lego Labs to complement the course work.

IdeasLabs are a unique format presented at World Economic Forum meetings around the world. In each IdeasLab, leading thinkers from the world’s top academic institutions present their current thinking, and the audience and their colleagues interact on their ideas.