Large parts of the Middle East and North Africa continue to be affected by geopolitical conflict and turbulence. Yet, according to the latest edition of the World Economic Forum’s Global Competitiveness Report 2014-15, some North African economies are slowly stabilizing and are starting to focus on economic reform that will improve the business environment and help restore investor confidence.

At the same time, the annual study of 144 economies shows some small, energy-rich economies continuing to build on their resource-driven wealth to undertake structural reforms that will help drive private-sector employment.

The report ranks markets on 12 key measures that influence competitiveness, including infrastructure, education and innovation. These are the top 10 performers in the region:

1. The United Arab Emirates takes the lead in the region, ranking 12th in the world this year. The country’s successful bid for Expo 2020 and its strong drive towards reforms have anchored many initiatives to enhance competitiveness. In addition, the UAE’s institutional framework, infrastructure, macroeconomic stability and ICT use have all improved. The country has a highly efficient goods markets, strong macroeconomic environment, deep public trust in politicians and high government efficiency. Future growth will require investment in health, education, ICT and innovation.

2. Qatar benefits from high levels of macroeconomic stability, efficient goods and financial markets, and good physical security. To achieve a more diversified economy, however, it needs to improve educational outcomes, especially participation in primary and tertiary education. Qatar should also foster the use of ICT, and further open up the country to foreign trade to increase productivity in non-hydrocarbon sectors. Qatari businesses would benefit from reduced administrative barriers to set up businesses and improved transport infrastructure.

3. Saudi Arabia enjoys high levels of macroeconomic stability, low debt, a comfortable budget surplus and the largest market size of the Gulf Cooperation Council (GCC) economies. Yet health and education lag behind other countries with similar income levels and, in light of the need to create jobs for a growing workforce, further emphasis should be placed on education and labour market reforms. More efficient use of talent – in particular, enabling a growing share of educated women to work – and better education outcomes, will increase in importance as the country attempts to diversify its economy.

4. Israel’s main strength remains its world-class capacity for innovation, which rests on innovative businesses that benefit from the presence of some of the world’s best research institutions and a favourable financial environment for start-ups. For the country’s innovation-driven competitiveness strategy to be successful in the future, however, Israel’s institutions will need continued upgrading and improvements in education, particularly at the primary level and in mathematics and science. The security situation in the country is once again fragile, although this has not affected Israel’s economy in the recent past.

5. Kuwait ranked 40th place overall in the report, a decline of four places on the previous year. Although the country stands out for its healthy macroeconomic environment, Kuwait, like many of its neighbours, is struggling to foster innovation. Businesses report their biggest challenges are inefficient government bureaucracy, restrictive labour regulations and corruption.

6. Bahrain’s GDP per capita has been outperforming the regional average for some years, and while the market is small compared to many neighbouring economies, its strengths include its good infrastructure, education provision and its technological readiness. Inefficient government bureaucracy and restrictive labour regulations are the largest barriers to business development and innovation.

7. Oman benefits from a stable macroeconomic situation, good infrastructure and strong institutions. Its population enjoys a high GDP per capita and largely efficient markets. Restrictive labour regulations are, however, seen as a significant barrier to doing business in the country.

8. Jordan has lowered its budget deficit and made some progress recently in education and financial market development, and has the potential to benefit more from its geographical proximity to GCC economies and Europe. The country has a relatively well-educated population, vibrant domestic markets, and its stable and efficient institutions are strong assets. However, the country faces high youth unemployment (31.3% in 2012) and has to manage high numbers of refugees from neighbouring Syria. Jordan could benefit from more openness to international trade and investment, which would trigger further efficiency gains in its domestic economy and facilitate the transfer of knowledge and technology.

9. Morocco has reduced its budget deficit and made improvements in primary education and innovation, which have supported a slight rise for the country in the global rankings this year. Some aspects of its institutions have improved as well, reflecting Morocco’s relative social and political stability and efforts made over recent years to modernize its business environment. The country should continue the process of economic diversification, and boost the quality and availability of education, seeking a better match between curricula and the skills sought by industry. Raising the share of women in the labour force would greatly strengthen the talent base available in the country, and boosting ICT use would improve Morocco’s competitiveness.

10. Algeria has seen improvements in the past year in its macroeconomic environment, which remains the country’s most important competitiveness strength. Improvements are also seen in other areas, such as institutions and physical security, albeit from a low level, and the quality of education seems to be improving. A major overhaul of the country’s institutional framework and increased focus on the efficiency of the goods, labour and financial markets will be necessary to put Algeria’s growth on a more sustainable trajectory. 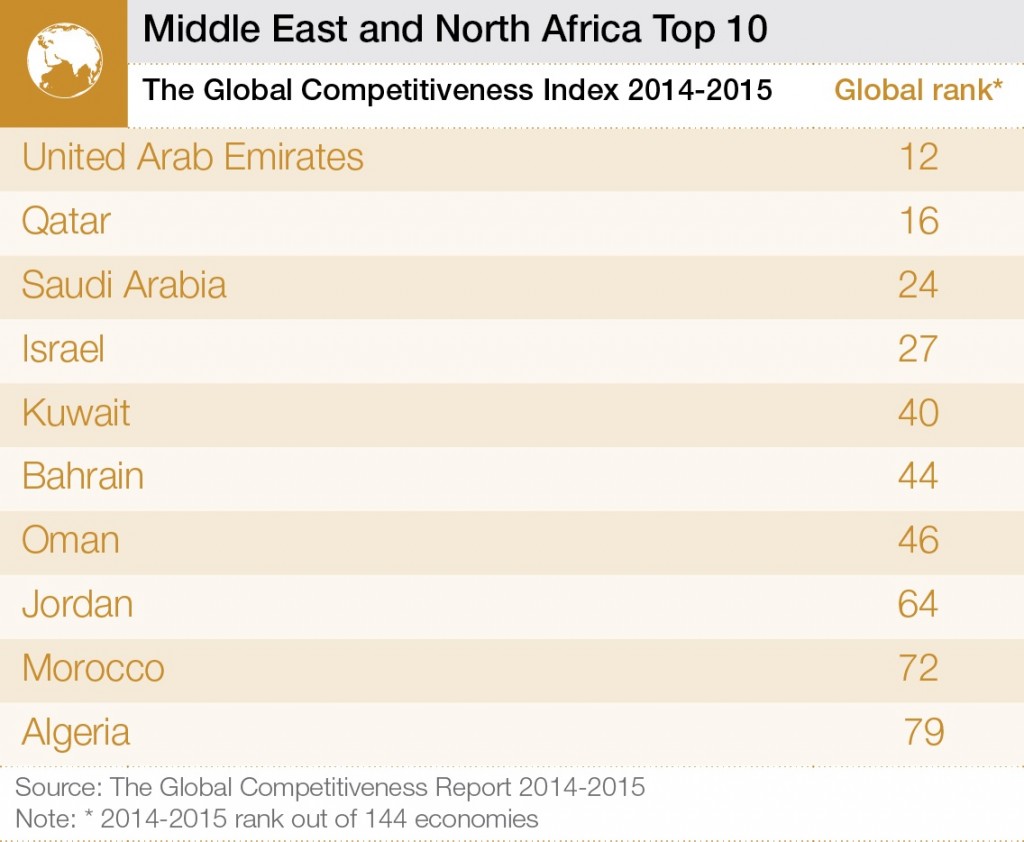