Six ways the internet of things will affect our jobs

As the internet of things starts to underpin more and more industries, businesses expect it to bring increasing value. But is it a fad or a truly disruptive force? Industry executives believe the IoT will have a powerful impact on their business.

How prepared are businesses and employees to make the most of this opportunity? One of the greatest fears often cited by industry is automation of jobs. While a certain number of jobs are likely to be replaced by the IoT, a big number of other jobs, even those we cannot fully envision today, will emerge.

Historically, technological advances have often come at the expense of certain categories of jobs. This was evident in the industrial revolution and recent digital revolution. Now, with the IoT, the impact of technology on jobs is of particular interest.

Changes are occurring rapidly, with demand for jobs such as bank tellers and secretaries on the wane, and the need for web designers and programmers growing. What will the jobs of the future look like, and how will they tie in with the IoT?

The IoT economy will lead to the emergence of new hybrid verticals (for example, on the edge of IT and medicine, IT and energy, robotics and agriculture). The hybrid industry verticals will create jobs with which every business is already familiar: product managers, software developers, hardware designers, data scientists, user experience designers and sales managers.

Other positions that will be rampant include account managers, marketing specialists, product designers, researchers and sales/business experts. In short, the types of jobs that will still thrive in the near future are the ones that rely on certain human attributes, such as problem-solving skills, and the ability to interact and adapt to various situations.

New categories of jobs will emerge because of the IoT. Designers of medical robots, personified medical device consultants, grid modernization managers, intermodal transportation network engineers are the kind of professions that will likely be on the rise in the near future.

They will require the knowledge of specific industry domains and new technologies, as well as hard skills (such as software development) along with soft skills (team management).

Yet it is difficult to predict the full range of jobs that may be enabled by the IoT in the next five to seven years. It is likely that the typical employee will see their roles augmented by new technologies, and become better skilled and better paid as a result. The blue collar worker of the past could move up to be a white collar worker.

This is the category of jobs that will perhaps be computerized sooner than any other. In particular, low-skill and repetitive jobs that have so far resisted automation will be replaced by technology.

The graph below demonstrates the shifts in skill level from 1980s to 2005. The lower the skills level required for the job, the faster those jobs became redundant. This process is similar to what happened in the phone industry, where the switchboard jobs were replaced by technology solutions.

The IoT and automation can also allow for monotonous and unsafe jobs to be replaced by technology and robots, resulting in safer work environments. For example, Rio Tinto, a British-Australian mining company, is planning to automate mining processes and direct robotic machines, and not people, into their mines. 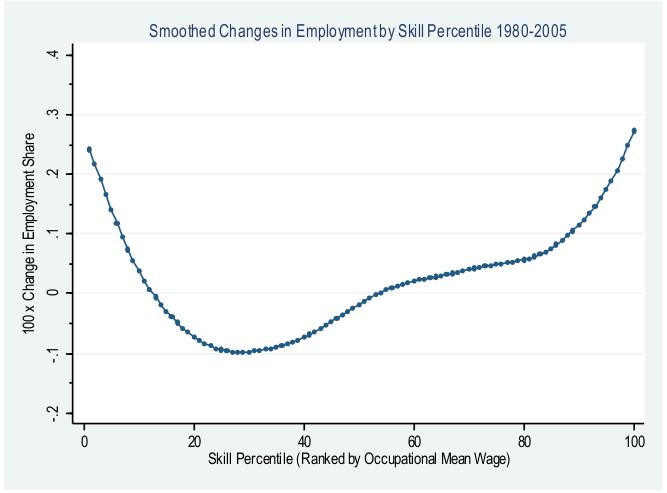 New jobs, especially those requiring software development, data analytics and quantitative skills, will be created to support products and services enabled by the IoT economy. Companies offering these new services and products will hire workers to make end-use simpler, as well as more widespread. The transformational effects unleashed by the new services, especially around operational efficiency, could be significant.

Companies will also seek to maximize their resources and meet deadlines by hiring IT project managers and creating new jobs in fields such as user experience and cloud computing. With all the new connections created by the IoT and the subsequent cyberthreats, there is likely to be an increase in new types of security and privacy-protection jobs.

Jobs less likely to be affected

Professions that might be comparatively spared by the IoT economy in the next decade include jobs in which human attributes such as creativity, intuitiveness and empathy play a large part.

Nurses, counsellors, psychologists, home-helps, teaching professionals and customer sales representatives are some of the fastest-growing jobs, and are most likely to ride the technological wave in the coming decade.

Today, the Internet of Things is expanding across the globe. Interestingly, the growth is most palpable in Asia, which accounts for 40% of global machine-to-machine connections, followed by Europe (28%), North America (18%), Latin America (8%), Africa (4%) and Oceania (1%).

As more traditional and lower-skilled jobs are replaced and new jobs created, workers will have to find new types of work, and they will also need to learn to work differently. To make the IoT economy trustworthy and reliable, workers will have to be comfortable with adjusting to change, be resilient against new risks and able to recognize and make the most of new opportunities.

Companies can help their employees adapt to this new environment by adopting a comprehensive digital strategy that takes into consideration how this will affect all staff, from the least technologically savvy to the most. They should ensure that workers are technologically literate and engaged, and help them see technology as a positive, as a way to save time and decrease effort.

Mastering new ways of working will be key to a person’s employability.

Humans are projected to live longer and longer - how can we change our outlook on work, caretaking and education to adapt? Stanford's Martha Deevy explains.