Why technology is key to Africa’s future

When talk turns to technology trends at this year’s World Economic Forum Annual Meeting in Davos, it should also turn to Africa – because that’s where some of the world’s cutting-edge innovation is happening right now.

Africa’s embrace of technology turns two common assumptions inside out – that tech breakthroughs happen in rich countries, and that Africa needs basic services before it can use high-tech solutions. What Africa’s start-ups are doing is using technology to build those basic services – and a whole lot more.

In Africa, as nowhere else in the world, technology is improving people’s lives – especially mobile services and applications. With minimal fixed line phone infrastructure, the continent has embraced the opportunity to leapfrog existing technologies, becoming a world leader in the delivery of such services.

Take Ushahidi, for example. In 2008, a group of Kenyan tech experts established a way to receive reports of Kenya’s post-election violence by web or mobile phone, creating real-time incident maps to show what was happening, when and where. Seven years later, Ushahidi – which means “testimony” in Swahili – has evolved into a global non-profit, spawning the iHub technology centre in Nairobi.

Ushahidi has incubated 150 tech startups and created more than 1,000 jobs. It has facilitated low-cost solutions to critical public problems and transformed the relationship between citizens and their governments.

Developed by Africans for Africans and beyond, mobile services and applications have helped millions get ahead, by providing accessible information on market prices, weather, health and even good farming practice. In Sierra Leone, fishing communities have used a combination of mobile phones and GPS-enabled cameras to report on foreign fishing boats stealing from their waters. 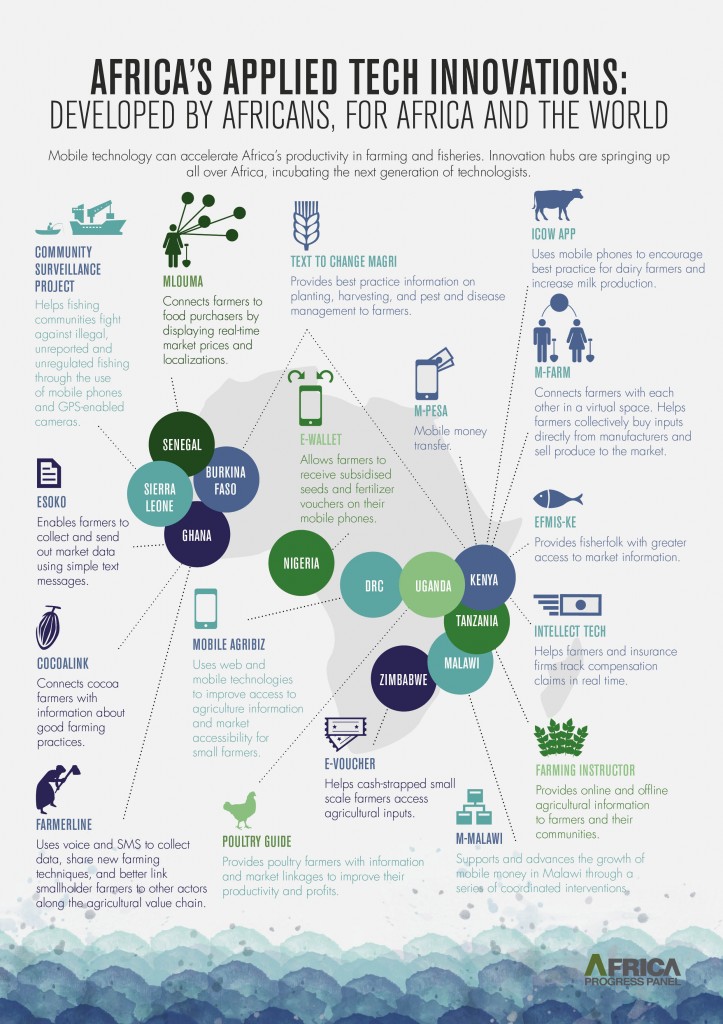 Many of these systems struggle to bridge glaring gaps in existing services. African farmers, for example, need better access to data, which means establishing more and efficient weather stations. The agricultural information service Esoko can provide weather data to farmers in Ghana, for example, which suggests that meteorological agencies need to partner with the private sector.

One hurdle that technology innovation faces in Africa is the lack of power. About 620 million Africans live without access to electricity, but mobile phones need to be charged and transmitter towers need power. Access to energy, a constraint for social and economic progress all over the continent will be a major focus in this year’s Africa Progress Report, to be launched in June by the Africa Progress Panel, which is chaired by Kofi Annan.

Africa is a continent of innovation and creativity, though – so technology itself is helping to break down the barriers to energy. Off-grid electricity is growing fast. Solar-powered phone chargers are becoming more common across the continent.

Technology could also help to bring down another barrier to progress in Africa. East Asian countries successfully converted their domestic savings into investment, facilitating their transformations to middle-income countries. But Africa has so far largely failed in this respect.

In most parts of the world, banks provide the major interface for savers. But Africa lacks bank branches, especially in rural areas, and the costs of banking are prohibitive for the overwhelming majority.

So how can Africa mobilize domestic savings? Technology can enable peer-to-peer lending – cutting out the middleman, removing the need for retail banks, and even leapfrogging existing business models.

Using mobile phones to make payments is another promising avenue. In Africa, just 25% of people have a bank account, but 75% have access to a mobile phone.

Kenya’s mobile payment system, M-PESA, has shown the way. In just six years, M-PESA has enabled 15 million Kenyans to send and receive money electronically. Some 86% of Kenyan households now report the use of M-PESA. A promising offshoot is a micro-insurance health cover service that allows subscribers to contribute to health insurance via M-PESA.

Technology has been key to many of Africa’s most exciting developments in recent years. Watch out for new pan-African social media platforms (such as Mara Online) emerging to challenge the global giants of Twitter, Facebook and LinkedIn. The discussions in Davos are highlighting how new technologies will rapidly transform societies in the future. But the action is already happening in Nairobi.

Author: Caroline Kende-Robb is the Executive Director for the Africa Progress Panel.

Image: A Somali man browses the internet on his mobile phone at a beach along the Indian Ocean coastline in Somalia’s capital Mogadishu, January 10, 2014. REUTERS/Feisal Omar.

How the 4IR is driving a new wave of energy innovation

Why workers are key to the sustainable, smart factories of the future