How are wages affected by international trade?

Wage inequality has increased in the past three decades, affecting both developed and developing countries alike. During the same period, international trade flows have grown significantly, with trade in intermediate goods and global production chains taking an increasingly predominant role. Put together, these developments have led researchers to reconsider trade integration as one important factor behind the rise in wage inequality.

Traditional trade theories, such as the Hecksher-Ohlin model, predict that trade integration should generate wage differences across industries. Recently, theoretical analyses of the labour market effect of trade integration have been enriched to account for the strong firm heterogeneity within industries that a number of empirical papers have documented. Within one narrowly defined industry, exporting and offshoring firms tend to outperform purely domestic firms in many dimensions including size, productivity and wages. This line of theoretical work, based on the seminal paper by Melitz (2003), predicts that trade liberalisation should enhance the dispersion of revenues across firms and generate wage dispersion between firms in a given industry. A first group of models attributes such dispersion to trade-induced changes in workforce composition. Another strand of the literature highlights rent-sharing mechanisms that arise in the presence of labour market frictions (see Harrison, McLaren and McMillan 2011 for a detailed survey). Theoretical studies highlight an a priori ambiguous effect of offshoring on wages. On the one hand, using cheaper goods produced abroad might improve the efficiency of the production process, which can then lead to higher wages. On the other hand, offshoring may allow firms to replace production previously made by local workers, which exerts a downward pressure on their wages, especially for unskilled workers whose production can be more easily substituted by offshoring.

Why use France as a case study?

Since the seminal paper of Bernard and Jensen (1995), a number of studies have quantified the effect of trade on wages for different developed economies (e.g. Hummels et al 2014, for Denmark). The case of France is of interest for at least two reasons. First, it is a large and open European economy. Second, it allows us to study the role of labour market institutions, in particular that of collective bargaining. As in most countries in Continental Europe, a large majority of French workers are covered by collective wage agreements, either at the firm- or at the industry-level (or both). Those collective wage agreements might help to identify rent-sharing mechanisms within the firm. In a seminal paper, Calmfors and Driffill (1988) show that, in firms covered by firm-level wage agreements, wages are more strongly to productivity than in firms covered by industry-level agreements.

We match different administrative firm-level data on wages, exports/imports and collective bargaining for the period 2005-2009 to construct a sample of more than 8,000 firms (including the largest French exporters/importers) which represent over two-thirds of French exports and imports of manufactured goods. We measure offshoring as the value of imported goods that are close to the final output produced by the firm. Within the firm, these goods produced with foreign labour are more likely to substitute for domestic labour.

Figure 1 relates firm-level average hourly wages to the percentiles of the distribution of exports or offshoring per employee. The positive correlation is quite clear – firms that trade more intensively tend to pay higher wages. For example, hourly wages are around 15 euros for the lowest exporters versus 19 euros for the largest exporters. 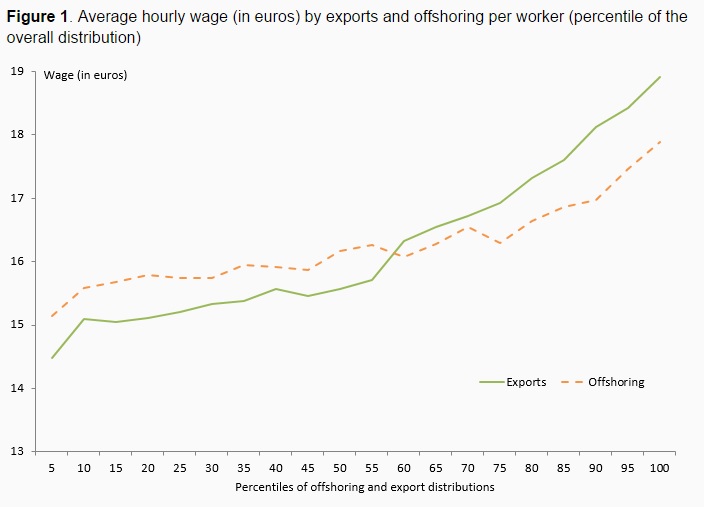 But the effect is heterogeneous across occupations

The effect of exports and offshoring on wages varies across worker subcategories. The average hourly wage of blue-collar workers goes from 12 euros for the least intensive exporters to more than 14 euros for the most intensive exporters (a wage premium close to 20%). Blue-collars workers’ wages vary much less with offshoring (from 12.1 to 12.8 euros, i.e. a 5% increase) whereas for executives, both exports and offshoring are positively related to their wages. The average hourly wage of executives in firms with the lowest exporting or offshoring activity is about 29 euros, and more than 33 euros in the largest offshoring/exporting firms (a 13% increase).

Econometric estimations that control for the endogeneity of international trade confirm these conclusions. These findings are in line with the widespread idea that, on average, workers in high-skilled occupations are complements to overseas production, while those in the relatively low-skilled ones are substitutes.

Figure 2. Average hourly wage (in euros) by exports and offshoring per worker (percentile of the overall distribution)

Wages are higher in firms with collective bargaining

As in many European countries, most of French wages are set through, or influenced by, collective bargaining at the industry- or the firm-level (see Avouyi-Dovi et al 2013). Over the period from 2005 to 2009, about 75% of the firms in our sample are covered by an industry agreement each year, and about 20% are covered by a firm-level agreement.

Figure 3. Average hourly wage (in euros) by exports and offshoring per worker (percentile of the overall distribution)

The main messages that arise from our analysis are the following – first, the prediction of theoretical models with firm heterogeneity, stating that trade generates wage inequalities that are related to firms’ trade participation, is largely supported by the French data. Second, export and offshoring shocks prompt different changes in the production process, with the latter having strong redistribution effects across occupational categories. Finally, the impact of trade on wages is affected by the firm’s bargaining level, and the heterogeneity in bargaining regimes across firms generates heterogeneous transmission of trade shocks to wages.

How to build safe, equitable and sustainable transportation systems

The pressure is growing on the shipping industry to reduce its environmental impact. More accurate data on carbon emissions is an essential first step

How to decarbonize heavy-duty transport and make it affordable