Policy trade-offs in impossible trinities or trilemmas are intrinsic to responses to globalisation. The analysis of a policy trilemma was developed first as a diagnosis of exchange rate problems – namely the incompatibility of free capital flows with monetary policy autonomy and a fixed exchange rate regime. It can, however, be usefully extended into other issues, such as discussions of domestic political institutions and even international relations.

In practice, as scholars investigating the exchange rate trilemma have demonstrated, it is empirically hard to determine a pure policy stance in the trilemma.  There are varying degrees of commitment to a fixed exchange rate regime, varying degrees of openness to international capital, and varying extents of monetary autonomy (Obstfeld, Shambaugh and Taylor 2005). Policy stances thus fall in the space between the corner positions.

The first trilemma is undoubtedly the most familiar of the four we examine. Padoa-Schioppa (1982) reformulated Mundell’s (1963) proposition as the ‘inconsistent quartet;’ of policy objectives by bringing in commercial policy, another central part of the globalisation package: free trade, capital mobility, fixed or managed exchange rates, and monetary policy independence. In both the Mundell (1963) and the Padoa-Schioppa (1982) formulation, the impossible choice provided a rationalisation for building a harder or more secure institutional framework for the securing of cross-border integration, and both were major architects of the process of European monetary union.

The policy constraint following from free capital movements has recently been posed in a more severe form by Rey (2013), who shows that in a globalised world of free capital movements, monetary policy is limited even with flexible or floating exchange rates. A choice to have a floating exchange rate thus does not give a free pass to monetary policy.

The formulation of the classical macroeconomic trilemma says little about the sequencing of policy measures. Opening the capital account in a fixed exchange rate regime is hard to reconcile with financial stability. This logic provides the second trilemma.

The interplay of international capital movements and a weak banking system in emerging markets has provided a constant source of major international financial crises. Well known examples include the US in the 1830s, Argentina in the late 19th century, Central Europe in the 1920s, some emerging Asian countries in the 1990s, and Southern Europe in the 2000s.  In many, but not all cases, the surge of capital also produced fiscal crises in the aftermath of an over-issue of state debt, driven by bailouts of insolvent banks or by guarantees (explicit or implicit). There was often then an attempt to compensate for financial stability by providing government guarantees, which in the end involved unfulfillable promises and made the financial instability greater.

After a period of financial opening, the consequent development of financial imbalances may strain the political system. States (whether they are autocracies or democracies) initially like the benefits that flow from open capital markets. Democracies, in which governments are responsive to short term demands of voters, are also likely to want to set monetary policy independently. They need to work out a trade-off between present monetary autonomy and the ability to attract inflows.

Thus the third trilemma may be formulated as the incompatibility of capital flows, independent monetary policy, and democracy. It poses a severe problem for people who believe that a major area of policy in a modern state should be capable of being decided by a democratic process. 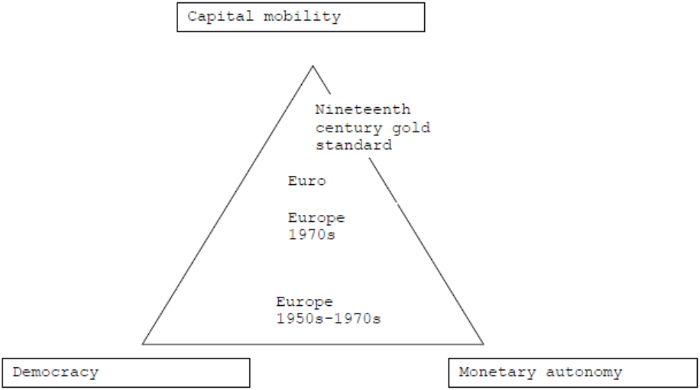 If there is an expectation that the behaviour is repeated, agents will build the future into their responses to the stimulus. The stimulus relies on the non-continuation of the policy.

The benefits rely on the expectation that the flows will continue. But states, especially democratic states, find it hard to commit to policies that will really lock in the institutional basis on which the long term inflows can occur.  There is an incentive to derive short run advantages (such as those following from monetary stimulus), and leave longer term problems to successor governments.

When and while the inflows continue, and the financial imbalances build up, the system appears politically attractive and stable. Indeed, political parties will often make compromises to support governments that can promise the institutional reforms needed to allow the inflow of capital to continue. Warning against the potentially deleterious effects is left to unpopular outsiders, who make Cassandra-like prophecies. The insiders who benefit from the inflows ridicule the Cassandras.

However, when the financial strains appear, and with them the costs of the engagement with openness, political parties no longer wish to be associated with the consequences. In the new circumstances, voters will blame the established parties and flock to anti-system or populist parties. The populists may be left or right. In fact, most anti-system parties try to fuse left- and right-wing critiques of the ’system’. The left-wing critique is that the burden of crisis adjustment falls unequally on the poor.  The right-wing critique emphasises that the adjustment benefits foreign creditors and derogates national sovereignty. The democratic principle is simply recast as a defence of national sovereignty. This backlash occurred in the Great Depression.

The memory of Depression politics faded with the credit supercycle that emerged slowly in the second half of the twentieth century. The argument then began to resurface again primarily in arguments about the compatibility of globalisation with democracy in emerging markets (Eichengreen 1996). Rodrik (2000 and 2007) formulated the point in this way as a general argument about the incompatibility of hyperglobalisation, democracy and national self-determination – “democracy, national sovereignty and global economic integration are mutually incompatible.”  He presented the EU as the best template of a new form of global governance with supranational rulemaking (Rodrik 2011). After the Global Crisis, the same problems and policy dilemmas appeared in rich industrial countries, and globalisation appeared vulnerable again.

Democratic politics can be thought of as evolving two sorts of operation:

The capacity to redistribute is limited if there is a large cross-border mobility of factors of production. Capital is most obviously mobile, and escapes if rates of capital taxation are too high. The same process, however, may also hold true in the case of taxation of high incomes as such income earners will try to operate in a different national and tax setting. Even the capacity to formulate general laws may be limited, in that incompatible principles in different countries may produce anomalies or loopholes, and possibilities for forum-shopping.

Democracies like ‘international order’ when it helps them to attract beneficial capital inflows. But both the capital mobility (as we have seen) and the limits imposed by international order narrow the scope for democratic politics.

The tying-hands argument in regard to ensuring that democratic decisions were compatible with a longer term framework of stability was frequently presented in the form of treaties or security arrangements. Often the reassurance that creditors needed in order to convince them to lend was political rather than simply a monetary commitment mechanism (such as participation in the gold standard, an exchange rate mechanism, or the monetary union). Alliance links offered to investors the security that creditor governments would put pressure on banks to continue lending, and hence reduced the likelihood of sudden stops. The search for credibility might lead to a security commitment, and countries would seek ties with powerful creditor countries because of the financial benefits. This kind of argument about the security bulwark that locks in capital movements applies to both democratic and non-democratic regimes.

In addition, in democratic societies the redistributory impulse generated by the political process may – especially when the limits of domestic redistribution become apparent – translate into a wish to redistribute the resources of other countries.  The burden of an unpleasant adjustment could conceivably be shifted onto other people – who are outside the national boundary and thus outside the political process. It is this impulse (Let the others pay!) that is restrained by treaties and security commitments. An alliance system or closer political union (as in modern Europe) helps to restrain destabilising democratic impulses, in which one country’s democratic choices are confronting the voting preferences of other democracies.

The fourth trilemma can thus be formulated as follows: capital flows, democracy, and a stable international political order cannot be reconciled with each other simultaneously.

The four trilemmas may not pose the apparently impossible policy straitjackets which they seem to represent. In practice, there are always intermediary solutions. In the original macroeconomic version, there is never pure capital mobility, or pure monetary policy autonomy. Some restrictions on capital mobility – even the home preference of investors, or increased macroprudential controls on banking – gives some room for policy manoeuvre. Policymakers are always making practical trade-offs.

Thinking about a broader concept of democracy in an international setting reduces the political logic of a zero-sum game mentality in which one country’s gains can only be achieved through losses imposed on others. A larger security umbrella can therefore provide a framework for a system of rules about capital movement and a framework for stability that would limit or circumscribe the destructive capacity of capital mobility fuelled credit booms.

But such grand compacts – of which the best historical example is the 1944-1945 settlement that included Bretton Woods – are hard to achieve without a substantial measure of fear. The equivalent today of the time pressure that existed at the end of the WWII is an urgent but also uncontrollably global crisis. The sad lesson of Bretton Woods is that things need to be extremely dangerous before a political dynamic of reform develops. It may be that today’s world, for all its anxieties, is simply not obviously dangerous enough and that policymakers are too secure about the permanence of the globalisation phenomenon.

Obstfeld, M,J C Shambaugh, and A M Taylor (2005) “The Trilemma in History: Tradeoffs Among Exchange Rates, Monetary Policies, and Capital Mobility”, The Review of Economics and Statistics 87(3), pages 423-438, December.

Rodrik, D (2007) ”The Inescapable Trilemma of the World Economy”,  http://rodrik.typepad.com/dani_rodriks_weblog/2007/06/the-inescapable.html

Rodrik, D (2011) The Globalization Paradox: Democracy and the Future of the World Economy, New York: Norton

More on Agile Governance View all

Agile Governance in the Post-Pandemic World

Watch this discussion to hear how governments are reimagining how emerging technologies should be governed and how businesses can contribute.

Millennials are feeling disillusioned with democracy. This is why

What the 2020 electorate looks like by party, race and ethnicity, age, education and religion