Compared to other developed countries, the US ranks high in income inequality and low in social mobility. International comparisons suggest that these measures are related; highly unequal countries tend to have low social mobility, as measured by intergenerational income persistence (Corak 2006). Alan Krueger, a former chairman of the Council of Economic Advisers, popularised this relationship as the ‘the Great Gatsby curve’. Combining our own data with data from Chetty et al. (2014), we construct a similar Great Gatsby curve for states in the US, shown in Figure 1, which resembles the international pattern (Kearney and Levine 2014a).

Figure 1. The Great Gatsby curve in the US 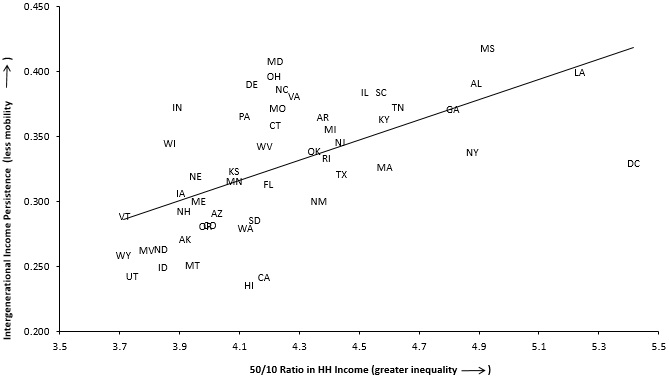 Notes: Income persistence is the relative mobility measure obtained from Chetty, et al. (2014). The 50/10 ratios are calculated by the authors.

If equality of opportunity were to prevail in a society, one would expect to see high social mobility, all else equal. There is reason for concern, then, that the US ranks poorly on the Great Gatsby curve, casting some doubt on the proposition that a child’s chances of success are independent of her family background.

High income inequality and school dropout rates in the US

There is particular cause for concern, however, if the US’ position on the Great Gatsby curve is somehow self-perpetuating. That is, if high inequality and low mobility affect the behaviour of disadvantaged youth in a way that further diminishes their chances of success, inequality may begin to look something like a vicious circle. This is the question we investigate in this column. In particular, we examine whether high income inequality (as measured as the gap between the bottom and middle of the income distribution) and low social mobility have a causal impact on high school dropout rates among disadvantaged youth—a decision that has important consequences for their ability to climb the economic ladder. Figure 2 shows that income inequality and dropout rates across states are correlated. The purpose of this column is to assess whether this correlation reflects a causal relationship between the two.

Figure 2. Relationship between inequality and rate of high-school non-completion

To measure income inequality, we focus on the ratio of the 50th percentile of the income distribution to the 10th percentile. We focus on this measure because the distance between the low-end and the middle of the income distribution seems more relevant to disadvantaged youth than is the distance to the top of the distribution. Our data confirm that dropout rates are more responsive to the 50/10 ratio than other measures of the income distribution. To measure social mobility, we use the intergenerational income persistence measure provided by Chetty et al. (2014), which captures the change in the child’s percentile rank for a one percentile increase in the parents’ rank. As a proxy for adolescents’ socioeconomic status (SES), we use the educational attainment of an individual’s mother. Although this is not a perfect measure, it is strongly correlated with a child’s socioeconomic status, and is available across the datasets we use.

Income inequality in the US has grown in recent decades, but this is largely attributable to growth in incomes at the top of the distribution. By contrast, lower-tail inequality, as measured by the 50/10 ratio, has remained relatively stable. The same is true of social mobility. However, there is substantial, persistent variation in lower-tail inequality and social mobility across states and metropolitan statistical areas (MSAs). We exploit this persistent geographic variation to explore the effects of inequality and mobility on the future economic prospects of disadvantaged youth, captured in this analysis by their decision to drop out of high school.

In our empirical analysis, we assess whether youth with low socioeconomic status in persistently high inequality locations are relatively more likely to drop out high school.  In high inequality states, higher dropout rates across the socioeconomic spectrum would signal that it is something else about the state that is the cause. If inequality has a causal impact, however, we would expect to see those at the bottom of the economic ladder affected the most, which is precisely what we find.

The finding that income inequality leads to lower rates of educational investment among lower income youth contradicts the predictions of a standard human-capital model, which predicts that when the returns to education are greater, an individual should seek to obtain more education. To consider this directly, we estimate an augmented model that includes a measure of the wage differential between high-school graduates and dropouts. Controlling for this wage premium does not alter the estimated positive effect of the 50/10 ratio and high school dropout rates. But at the same time, the data do indicate a negative relationship between the wage premium and high school dropout rates. In other words, the data clearly indicate offsetting effects.

Inequality in the form of wage returns does have the presumed positive effect, while overall household level income inequality has a negative effect on educational outcomes for low-income youth.

Is it only an effect of income inequality?

A limitation in our methodology is that we may be confusing the effect of inequality with other persistent differences across states that are correlated with inequality and have a disproportionate effect on the educational outcomes of low-income youth. Plausible examples include other features of the income distribution, the industrial composition of the labour market, or the demographic characteristics of a state (like the minority composition or fraction of single parent households). We run horse-race models directly comparing the effects of these conditions on the dropout rate of low-income youth to that of lower-tail income inequality. In every case, the data clearly show that the gap between the bottom and the middle of the income distribution leads to lower rates of high school completion among low-socioeconomic status youth, and the magnitude of that estimated effect is remarkably consistent across specifications.

We then run a series of analyses aimed at identifying mediating factors driving the link between income inequality and high school dropout rates. We consider whether the observed link is being driven by rates of residential segregation by race or income, or by public school financing. The data do not offer support for these mechanisms.

We also empirically explore one final alternative explanation. It is possible that the relationship we observe is attributable to the distribution of innate ability in the population under consideration. Perhaps low-income youth in more unequal places are simply of lower ability, for whatever reason. If this were the case, our results would reflect something about the underlying ability of the population, rather than income inequality as such. To investigate this possibility, we incorporate into the model the test scores of low-income students as a proxy for ability. Including AFQT scores reduces our estimate of the impact of inequality on high school dropout rates somewhat but we still find a strong relationship. All of these approaches support the notion that inequality is causally related to the likelihood of dropping out of high school among low-socioeconomic youth.

The self-perpetuating impact of the lack of opportunity

So why does greater income inequality increase the dropout rate among low-income high school students? There is a class of theories that we are not able to directly test empirically that remains a viable set of candidate explanations – namely, theories focused on individuals’ perceptions of their own identity (Akerlof and Kranton 2000, Watson and McLanahan 2011), their relative societal position (Luttmer 2005), or their perceived chances of their own success (Kearney and Levine 2014b). We hypothesise that the observed relationship can be explained by the ‘economic despair’ model described in Kearney and Levine (2014b). That model focused on the decisions of young, unmarried women to have children, but the explanatory value of the model readily extends to dropout behaviour. The idea is that an increase in lower-tail inequality widens the gap between low-socioeconomic status youth and the middle-class, which in turn makes economic success look increasingly out of reach from the perspective of low-income youth. The perceived likelihood of climbing the economic ladder may fall to a level that no longer warrants continued investment in education, leading the student to drop out.

If, as our results suggest, high inequality and low mobility affect the behaviour of low-income students in a way that further diminishes their chances of success, a lack of opportunity for disadvantaged students may be self-perpetuating. This conclusion highlights the importance of policies that give low-income youth reasons to believe they have opportunities to climb the economic ladder, along with policies that make those opportunities real.

Kearney, M S and P B Levine (2014a), “Income Inequality, Social Mobility, and the Decision to Drop Out of High School”, NBER Working Paper 20195.

Watson, T (2009), “Inequality and the Measurement of Residential Segregation by Income in American Neighborhoods”, Review of Income and Wealth, 55(3): 820-844.