Why are service-exporting companies so productive?

According to WTO statistics, world exports of services grew by 8% per annum between 1980-2013, exceeding the exports of goods (which grew at 7% per annum). The ratio of service exports relative to goods exports increased from 18% in 1980 to 24.7% in 2013. In 2013, Japan ranked fourth in export of goods and eighth in export of services, with annual growth rate of service exports (6.4% from 1980 to 2013) exceeding that of goods exports (5.3%). These numbers indicate a relatively low presence of Japan in the world service trade.

However, studies on service trade have lagged far behind those on goods trade, mainly due to the limited availability of good statistical data (see Francois and Hoekman 2010 for a survey). Particularly, empirical evidence on service trade using firm- or establishment-level micro data has been scarce.

As most services are distinguished by simultaneity of production and consumption, the transaction usually requires proximity between suppliers and consumers. Thus, the geographical distance matters more than in the transaction of goods. Cultural and institutional distances may impose an additional burden on service trade. In contrast to goods trade where tariffs and non-tariff barriers (NTBs) have been substantially reduced through multilateral and bilateral trade negotiations, a large number of services are still subject to public regulations. Given that regulations and standards imposed on services differ markedly by country, the barrier to crossing a national border is higher for service trade than it is for goods trade (e.g., Miroudot et al. 2013).

During the last decade, theoretical international trade studies on the heterogeneity of firms have advanced rapidly. Paralleling the theoretical development, a large number of empirical studies on international trade and foreign direct investments using firm- or establishment-level data has been accumulated. These studies demonstrated that there is a strong positive relationship between globalising activity and the productivity of the firms (see Greenaway and Kneller 2007, Wagner 2007, 2012, Bernard et al. 2012 for surveys).

However, the vast majority of the extant empirical studies that employ micro data have dealt solely with goods trade. The rare firm-level studies that conduct a separate analysis of service trade include Breinlich and Criscuolo (2011) on UK firms, Kelle et al. (2013) on German firms, Haller et al. (2014) on firms in four EU countries, and Malchow-Møller et al. (forthcoming) on Belgian firms. However, all of these studies analyse firms in EU countries. In particular, UK firms are exceptional in the world service trade because the UK is the third largest service exporting country, and the ratio of service exports relative to goods exports is very high (54.0% in 2013). Other studies mentioned herein also analyse firms in EU countries where goods/services market integration is advanced. From the service trade perspective, these countries differ greatly in economic circumstances from non-EU countries such as Japan or the US.

To deepen our understanding on this issue, we empirically investigated the relationship between service trade and various firm characteristics in comparison with that of goods trade using a large panel data of Japanese firms (see Morikawa 2015 for more detail). The data are from the Basic Survey of Japanese Business Structure and Activities (BSJBSA) by the Ministry of Economy, Trade, and Industry for the period 2009-2012. The Basic Survey is a compilation of representative government statistics on all Japanese firms with 50 or more regular employees engaged in manufacturing, wholesale, retail, and service industries, and approximately 30,000 firms are surveyed every year. We perform a simple regression analysis to explain the total factor productivity (TFP), whereby the dummies for goods/service trading firms are used as key explanatory variables. 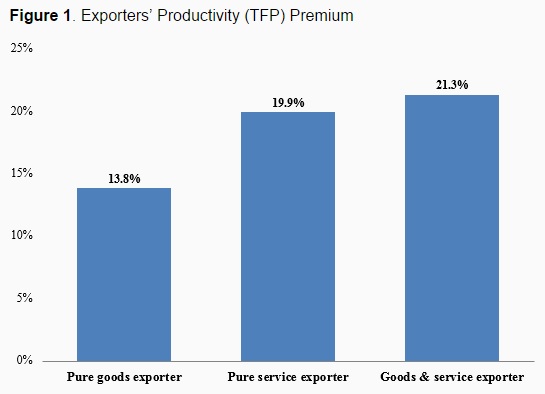 Notes: The figure is drawn from an OLS regression result using the BSJBSA data for the fiscal years 2009-2012. The reference category is the non-exporting firms. Control variables are firm size (log employees), year dummies, and three-digit industry dummies.

Notes: The figure is drawn from an OLS regression result using the BSJBSA data for the fiscal years 2009-2012. The reference category is the non-exporting firms. Control variables are firm size (log employees), year dummies, and three-digit industry dummies.

To summarise, our findings indicate that fixed costs to initiate service trade exceed those to initiate goods trade. This is possible due to the information asymmetry in evaluating the quality of services, the high transportation costs, and the differences in institutions, cultures, and languages. We conjecture that policies to liberalise and facilitate service trade may play a more important role in globalising firm activities than do policies for goods trade.

A study has found adults to be more generous and compassionate around children. Involving children in high-level decision making could benefit society.

The post-pandemic consumer is more important than ever to economic recovery from COVID-19. But how will the pandemic have changed their spending habits?

These are the most popular paid subscription news websites

Innovations in reusable packaging need a playbook. Here's why