A history of inequality in Latin America

Income and wealth disparities in Latin America are higher than in Asia and in most industrial nations, a condition that many economists attribute to factors developed during the region’s history of Portuguese and Spanish rule.

In Latin American Inequality: Colonial Origins, Commodity Booms, Or A Missed 20th Century Leveling?(NBER Working Paper No. 20915), Jeffrey Williamson takes issue with what he calls “this pessimistic belief in historic persistence.” He finds that only within the past century has inequality in Latin America stood out, even though many analysts mistakenly assume this has been the case for much longer. Prior to the last century, the region had the same, or a lower, level of inequality than that existing in Asia, Western Europe, and the U.S. 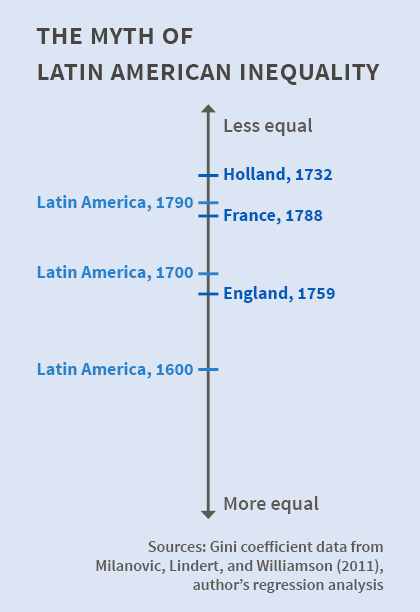 The study draws on Williamson’s previous work with Branko Milanovic and Peter Lindert, which constructed an “ancient inequality database” drawn from economic and demographic information ranging over two millennia. The data were collected from 29 places, including four in Latin America. This database makes it possible to estimate Gini coefficients, which measure inequality on a 0 to 1 scale with 0 representing perfect equality and 1 all of society’s income accruing to the highest-income individual.

Pre-colonial Latin America “had modest levels of inequality much like all the other poor pre-industrial societies in our sample which had escaped being colonized,” Williamson writes. In the immediate wake of colonization, the Gini coefficient rose from 0.23 to 0.35, but it then leveled off. European diseases initially ravaged the native population, reducing the labor force, but in later decades of the colonial era, as the population recovered and was supplemented by slaves from Africa, inequality rebounded. The estimates suggest a peak Gini coefficient of 0.58 around 1790. Inequality then declined as the Latin American economies were crippled by their wars for independence and the political instability that followed. Williamson finds that pre-industrial inequality was lower in Latin America (pre-1870) than in pre-industrial northwest Europe (pre-1800) and in the early industrial United States (1860).

By 1870, inequality in Latin America was no higher than in the United States and Western Europe.

After 1870, however, Latin America saw a rapid increase in inequality as commodity exports boomed, benefiting the elite who owned much of the region’s cropland and minerals. “Latin America had joined the rich country inequality club by World War I,” but “it certainly had not yet become the world’s most unequal region,” Williamson writes.

What sets Latin America apart is that economic inequality continued to rise from the 1920s to the 1970s while it declined sharply in much of the rest of the world, including the U.S. Why that was the case, Williamson writes, deserves as much attention, or more, than its colonial heritage.

Author: Steve Maas is a contributing writer to The Bureau of Economic Research.

Image: A woman walks along a street. REUTERS/Eliseo Fernandez.