How developing countries were hit by financial crisis trade barriers

Conventional wisdom has it that the multilateral trading system was tested during the global economic crisis and passed with flying colours. No 1930s-style raising of import barriers occurred ergo trade distortions were kept under control, or so the argument goes. This rosy view has been called into question as more data on global trade dynamics has come to light. Some have even contended that the era of rising world trade-to-income ratios are over, a phenomenon referred to as “peak trade” (Constantinescu et al. 2014).

Why does this matter? Export-led growth is said to have been particularly important for many developing countries. Anything that throws sand into the wheels of a nation’s export machine can limit that economy’s growth prospects and the potential to create employment, raise wages, and lift individuals and families out of poverty. While some contest the contribution of higher exports to poverty alleviation and growth, the argument that lower national exports–or foreign trade distortions that limit such exports–enhance development is rarely heard.

This column summarises the findings of a recently-published study of the impact of crisis-era trade distortions on the exports of the Least Developed Countries (LDCs), based on data collected by the Global Trade Alert (GTA). Between 2000 and 2008 LDC exports grew in nominal terms 20.6% per annum. Since 2008 the annual rate of growth of LDC exports has collapsed to an average of 5.7%. How much of that export slowdown was due to trade distortions imposed since the crisis began?

The study breaks new ground by presenting new data on the extent of trade covered by crisis-era trade distortions, by considering a wider range of such distortions than most studies of bilateral trade flows, and by taking account of the impact of trade reforms. A richer and disturbing picture of the challenges facing LDC exporters emerges, with clear implications for trade and development policymaking.

Trade distortions faced by LDCs during the crisis era

An important difference between the GTA’s reporting on trade restrictions and that of international organisations is the former’s more comprehensive approach including, in particular, consideration of potentially trade-distorting subsidies. A LDC exporter may find their sales in a trading partner reduced for at least two subsidy-related reasons. First, the LDC exporter may compete against a domestic firm in the trading partner that has received a bailout or is being kept afloat by public subsidies. Second, the LDC exporter may compete in the trading partner’s markets against another exporter from a third country that has received an export subsidy, export-related tax break, or other artificial export incentive.

In terms of numbers of measures tariff increases harmed LDC commercial interests most often (121 times since November 2008). In second place came state aids and bailouts to firms that were not export subsidies. This was followed closely by hits to LDC commercial interests from export taxes and other export restrictions. Taken together, tariff increases, state aids, and export taxes and restrictions account for half of the 494 trade distortions faced by LDCs that were implemented between November 2008 and December 2014. When it comes to trade coverage, however, the action is elsewhere.

Figure 1 reports for each of the years 2009-2013 the trade-weighted average of the share of LDC exports that (a) did not face a foreign import restriction, (b) did not compete in product lines where there was a bailed out domestic competitor, (c) did not compete in product lines where there was an unsubsidised exporter from a third party that sold to the same foreign market and (d) benefited from some form of trade liberalisation. The higher each of these shares is the more favourable is the global trading environment facing LDC exporters. Growth in these shares over time represents good news for LDC exporters. Analysts may be used to trade coverage ratios, principally for import-restricting non-tariff barriers. These shares are comparable to trade coverage ratios but for a class of countries and for a wider range of policy changes, including the liberalisation of imports.

Figure 1 reveals that relatively few LDC exporters compete in foreign markets with a subsidised or bailed out domestic firm located in that foreign market (see the thick line with triangles at the top of the figure.) A growing share of LDC exports benefited from foreign trade reforms, highlighting the importance of controlling for this factor when estimating the determinants of LDC export growth. By 2013 over 40% of LDC exports were in product lines and to export destinations where some form of import liberalisation had occurred since November 2008. The year 2010 saw a big fall in the share of LDC exports not affected by foreign import restrictions and, given that share has not changed much since 2010, it suggests that many crisis-era import restrictions facing LDC exporters have yet to be unwound.

The most striking finding in Figure 1 is the very low share (around 0.1) of LDC exports that compete in third markets where no foreign supplier has been the beneficiary of an artificial export incentive. For sure that share rises a little in 2013, which is good news for LDC exporters. Nevertheless, the share is always low suggesting that competition in many markets where LDC firms export is not on the merits. Indeed, to the extent that LDC governments cannot afford to match foreign export incentives then their exporters may be at a structural disadvantage. The amount of LDC trade potentially affected by foreign export incentives, including tax breaks for exporters, call into question the results of prior studies that have not controlled for the impact of these policies.

To estimate the contribution of different determinants of LDC exports we collected the largest possible sample of bilateral exports from LDCs to their trading partners for the years 2009 to 2013. Once limits of data availability were taken into account a sample of 6,393 observations on such bilateral trade was assembled, accounting for over 90% of total LDC exports. A standard gravity equation approach was taken, augmented with data on the bilateral shares of exports that benefit from trade liberalisation and that were not harmed by foreign import restrictions, by domestic bailouts, or by export incentives to firms based in third countries. A wide range of econometric specifications were employed and despite the well-known noisiness of bilateral trade data, a consistent pattern of econometric estimates was found. It is important to stress that there is considerable cross-sectional and intertemporal variation across the policy variables in our sample diminishing, in principle, concerns about spurious correlation between trending variables.

As in most gravity equation studies, changes in the GDP of the trading partners influenced LDC exports in a statistically significant manner. Interestingly, of the policy-related variables, the share of LDC exports unaffected by foreign import restrictions performed worst of all. Meanwhile, foreign trade liberalisation, bailouts of domestic firms by trading partners, and third party export incentives were found consistently to be statistically determinants of changes in LDC exports during the crisis-era. The fact that data on the former variables is much more readily available than data on the latter variables has probably skewed other analyses of crisis-era trade flows.

Our most conservative econometric estimates were used to forecast the impact of foreign trade reforms and statistically-significant foreign trade distortions on LDC export growth for each year 2009 to 2013. The results are reported in Table 1. Foreign trade distortions are estimated to have held back LDC exports by 31.5% during the period 2009 to 2013, or in total by an amount in excess of a quarter of a trillion US dollars. The impact of foreign trade reforms pales in contrast, accounting for at most one-eighth of the scale of the harm done to LDC exports. Further computations reveal that by far the largest contributor of harm to LDC exports comes from artificial export incentives offered by governments. 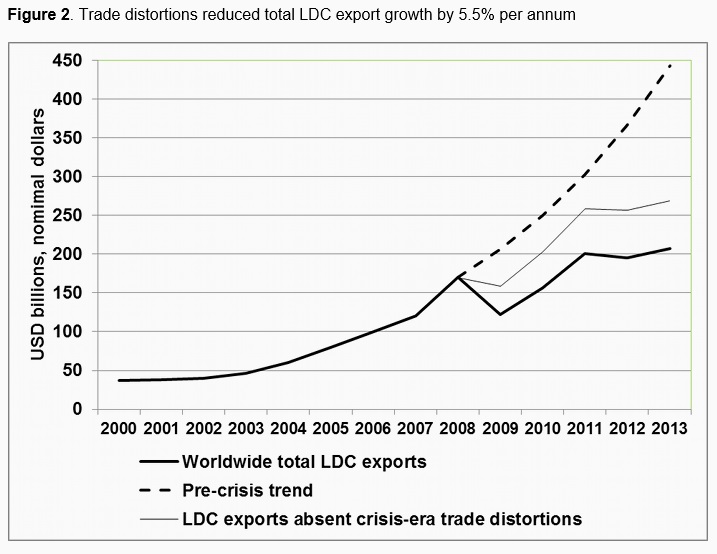 Many nations claim to take the plight of the LDCs seriously in their trade and development policies. Much is made, for example, of the benefits to LDCs of implementing the WTO’s Trade Facilitation Agreement. Yet many of the same governments that laud this accord also put in place trade distortions that limit LDC exports. All too often the policies of LDC trading partners are incoherent.

Our study also highlights the need to revisit WTO disciplines on financial incentives. This has now been recognised by the Group of Seven industrialised nations. In their recent June 2015 summit communiqué, G7 leaders stated “International standards for public export finance are key to avoiding or reducing distortions in global trade, and we emphasize our support for the international working group on standards for public export finance” (G7 2015). That such trade distortions are frequently buried in the minutiae of national tax systems is a further example of murky protectionism and the tendency of governments to substitute transparent for more opaque policy instruments.