What Angelina Jolie told the African Union about violence against women

Angelina Jolie, actress and United Nations ambassador for refugees, has made an urgent plea for greater international support to stop crimes against women at the African Union summit in Johannesburg.

The African Union summit’s theme is ‘Year of Women Empowerment and Development’ and Jolie made a series of hard-hitting comments on June 12, including the following remarks: 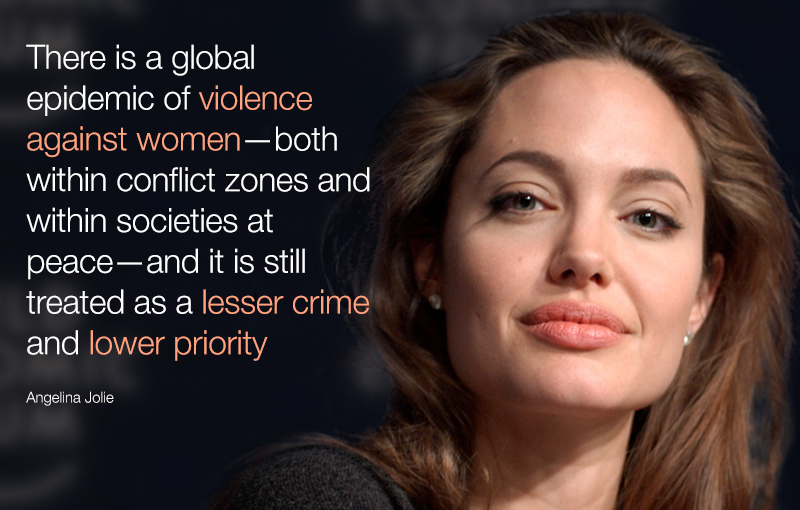 “There is a global epidemic of violence against women – both within conflict zones and within societies at peace – and it is still treated as a lesser crime and lower priority.”

“The near-total impunity that exists worldwide for crimes against women, in conflict zones in particular, means that we are seeing more and more armed groups turn it into their weapon of choice.”

“Women and girls are bearing the brunt of extremists that revel in treating them barbarically. This is inextricably linked to our overall failure to prevent and end conflicts worldwide, which is causing human suffering on an unprecedented level.”

“We need policies for long-term security that are designed by women, focused on women, executed by women – not at the expense of men, or instead of men, but alongside and with men. There is no greater pillar of stability than a strong, free and educated woman, and there is no more inspiring role model than a man who respects and cherishes women and champions their leadership.”

“Please think what it would mean if the 54 nations of the AU press together as one towards full rights and opportunities for women.”