A brief history of gold

Investors will be closely monitoring today’s US Federal Reserve meeting for clues on when the country will start raising short-term interest rates. It’s just one of many recent developments to blame for the slump in gold prices. Although prices did stabilize slightly on Tuesday, after reaching a five-year low of $1,085.50 at the end of last week, industry experts still can’t decide whether the worst is yet to come. “Until the Fed provides some clarity on Wednesday, it’s difficult to say that we’ve hit a floor,” an analyst from ING told journalists.

Gold’s three pillars – its value as a currency, commodity and safe-haven asset in uncertain times – mean outside events regularly influence its price, as the timeline below shows.

1998: The United Kingdom announces plans to start selling off the country’s gold supply, sending prices tumbling to a 20-year low. Britain sells part of its gold reserve for between $256 and $296 an ounce.

1999: In August, fears that other central banks will start selling off their gold reserves push prices down to $251.70. By October, prices are back up to a two-year high of $338, after 15 European central banks sign the Washington Agreement on Gold, pledging to limit their gold sales.

2005: Towards the end of the year, the price of gold breaks the $500 barrier for the first time since 1987. Some analysts blame inflation in the US and concerns about the state of the global economy, although others discount these fears.

2006: Gold prices reach $730 an ounce in spring – the fastest one-month gain in 30 years – on the back of a weak dollar and a report from the International Atomic Agency that claims Iran is conducting a uranium enrichment programme.

2008: In September, turmoil in the stock markets sees the price of gold jump by $90 an ounce, a record one-day gain. At the same time, the dollar falls to a three-year low.

2009: In the wake of the global recession, gold breaks the $1,000 barrier. As economic uncertainty grows, so too does demand for the precious metal, and prices continue to rise, reaching $1,200 by the end of the year.

2011: Geopolitical uncertainty sends the price of gold skyrocketing. This was the year of the Arab Spring, Western military intervention in Libya, strikes in Greece, riots in the UK and the continuing Eurozone crisis. A record high comes in September, when gold peaks at $1921.17 per ounce.

2012: A year after its all-time high, the price of gold stands at $1,690. Analysts blame the dip on the Fed’s desire to wind down quantitative easing; panic selling drives the price down even further. 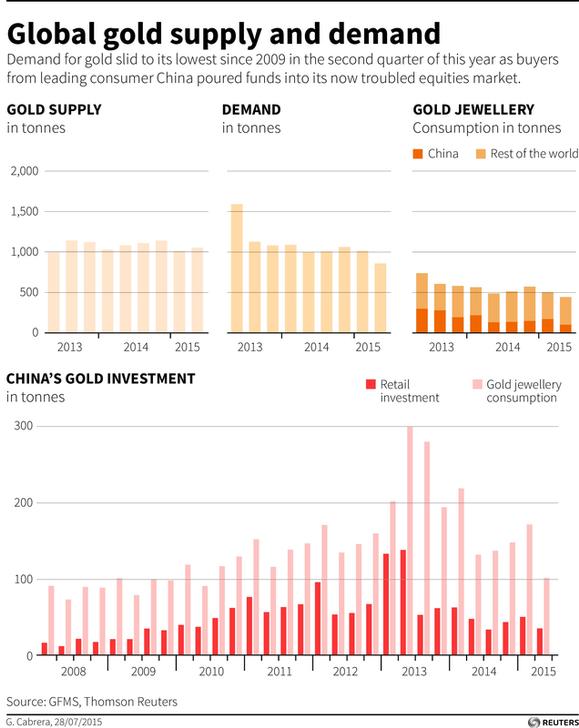 2013: By the end of the year, gold prices have fallen 23%, the largest annual decline since 1981. Analysts put the drop down to expectations that the Federal Reserve will cut its bond-purchase programme, along with a more favourable economic climate, which drives investment in equities instead.

2015: With a strengthening US dollar, a new bailout deal for Greece and the realization that China’s gold reserves are smaller than previously thought, gold prices tumble to levels 43% lower than their 2011 peak.

Have you read?
Where does the Fed see rates heading?
Greek banks re-open and gold falls

Author: Stéphanie Thomson is an editor at World Economic Forum.

Deep-sea minerals could meet the demands of battery supply chains – but should they?

Deep-sea mining has attracted controversy due to concerns of potential damage to delicate ecosystems before scientists have had chance to assess what is at stake.

How data can help mining companies tackle their trust deficit

Mining companies say their number-one risk is a lack of trust from local communities. A new report shows how better use of data can help close this gap.

Is this the moment we put heavy industry on a path to net zero? This week's Great Reset podcast

Aluminium can help to build the circular economy. Here's how