Which countries have the most – and least – efficient governments?

The efficiency of government has a significant bearing on a country’s competitiveness and economic growth. Excessive bureaucracy and regulation, a lack of transparency, and inadequate legal frameworks all impose additional costs on business and impede expansion.

The World Economic Forum’s annual Global Competitiveness Report evaluates the efficiency of 144 of the world’s governments on measures including the wastefulness of government spending, burden of regulation and transparency of policymaking, to produce an overall global ranking. 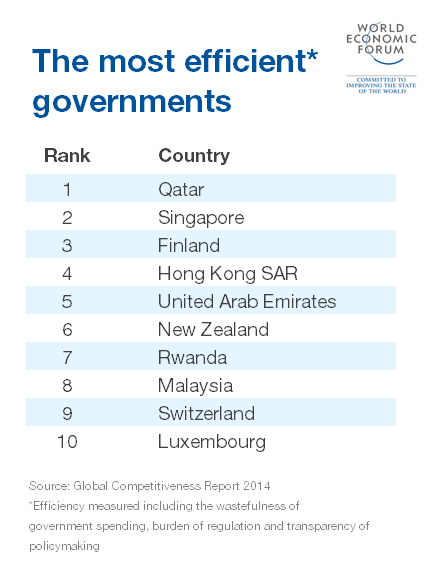 Qatar emerges as the country with the most efficient government, closely followed by Singapore. Rwanda’s strong showing in seventh position was secured thanks in large part to the low level of waste in government spending.

At the other end of the scale, Venezuela has the least efficient government, some way behind Italy and Argentina in second and third places. If you’d like to learn more, read Can better regulation boost growth? and 10 ways countries can improve their competitiveness.

Image: The feet of visitors are seen from below as they make their way along a translucent walkway at the National Museum of American in Washington. REUTERS.

South Asia has an opportunity to build back better – and achieve the SDGs – through regional cooperation, the new services economy and a green recovery.

3 key indicators for monitoring the US economy in 2022

From metaverse to DAOs, a guide to 2021's tech buzzwords

The two population megatrends set to shape the next decade