The supply of African slaves to American plantations reached an all-time high in the late 18th century (Klein 1999). After anti-slave trade legislation finally shut down the Atlantic slave exports, commodity exports filled the gap. This so-called ‘commercial transition’ was completed in West Africa before it hit East Africa (Austen 1987, Law 2002). It was a game-changer, since it put a halt to the continuous drain of scarce labour and paved the way for the expansion of land-intensive forms of tropical agriculture, engaging smallholders, communal farms, and estates.

The establishment of colonial rule over the African interior (c. 1880-1900) reinforced Africa’s commodity export growth. Colonial control facilitated the construction of railways, induced large inflows of European investment, and forced profound changes in the operation of labour and land markets (Frankema and van Waijenburg 2012). That is, colonial regimes abolished slavery, but they replaced it with other forced labour schemes. The scramble pushed African exports to new heights, but without the preceding era of commercialisation the African scramble probably would never have taken place.

Africa’s commercial transition was inextricably connected to the rising demand for industrial inputs from the industrialising core in the North Atlantic. Revolutions in transportation (railways, steamships), a move towards liberal trade policies in Europe, and increasing rates of GDP growth enhanced demand for (new) manufactures, raw materials and tropical cash crops. African producers responded to this demand by increasing exports of vegetable oils (palm oil, groundnuts), gum, ivory, gold, hides and skins. Palm oil, a key export, was highly valued as a lubricant for machinery and an ingredient in food and soap. During and after the scramble, the range of commodity exports broadened to include raw materials like rubber, cotton, and copper, as well as cash crops such as cocoa, coffee, tea and tobacco. The lion’s share of these commodities went directly to manufacturing firms and consumers in Europe. Meanwhile, technological innovations also reduced the costs of colonial occupation. These included the Maxim gun, the steamship, the railway and quinine, the latter lowering the health risks to Europeans in the disease-ridden interior of the ‘dark continent’.

To obtain a deeper understanding of the connection between Africa’s commercial transition and subsequent colonial intervention, we constructed annual time-series of export volumes, export values, commodity export prices, import prices, and the net barter terms (the ratio of average export to average import prices). The data cover the period from the heyday of the Atlantic slave trade in the 1790s to the eve of World War II,1 and make it possible to analyse the commercial transition with much greater precision than was possible previously and to compare the development of African trade with other commodity exporting regions (Williamson 2011).

There was a prolonged rise in the net barter terms of trade for sub-Saharan Africa from the 1790s to the 1880s, a commodity price boom that was especially pronounced in the four decades between 1845 and 1885. Figure 1 shows that this secular price boom peaked exactly at the date of the Berlin conference (1884-5), when diplomats negotiated how to carve up Africa among the European imperialists. The terms of trade tripled in just four decades. While the terms of trade for commodity exporters were rising everywhere in what was once called the Third World, nowhere was the boom greater than for Africa. Furthermore, the scramble started right at the moment when African exports reached their highest exchange value. 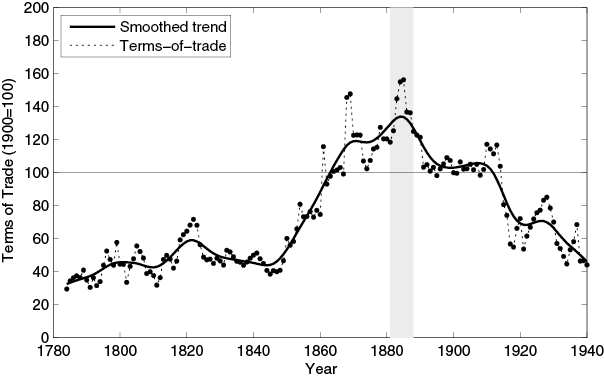 The share of West African exports in French imperial trade was much larger than it was in British imperial trade. Around the mid-19th century, about two thirds of French imperial trade was with Africa, the largest part of it with North Africa (e.g. Algeria), but a substantial share was also with West Africa. British imperial trade was dominated by India, and this distinction is consistent with the chronology of the scramble. The French set a chain reaction in motion by moving into the West African interior to survey the possibilities of a railway connection between the major trading hubs of the middle Niger delta (Gao, Timbuktu) and their trading enclaves along the Senegalese coast. The British responded by securing the lower Niger delta. After less than two decades, virtually the entire continent was divided among a handful of European powers.

The long-term secular trend of sub-Saharan Africa’s terms of trade coincided with the patterns observed in other parts of the commodity-exporting periphery. However, the price boom of 1845-1885 was exceptionally sharp compared with Latin America, Southeast Asia, India and China. From start to peak, the purchasing power of African exports rose by 3% per annum. Although Africa’s share of world exports remained modest, the trend fuelled an optimistic assessment of the future profitability of colonisation, French assessments in particular. Merchants, industrial capitalists, explorers (like David Livingstone) and even Christian missionaries added to the babble about new markets, new investment prospects, new converts, and the moral obligation to abolish African slavery and replace it with a commercial model.

Did colonisation lock Africa into a perverse path of specialisation?

Ironically, the secular terms of trade boom turned into an equally prolonged bust right at the time that the scramble gained steam. This price bust continued, with only some temporary reversals, up to the eve of World War II. In fact, in 1940 Africa’s terms of trade were back at their 1800 levels. Table 1 below shows that export volumes continued to expand after 1885 at a faster pace than before, thus offsetting the price declines. In other words, African farmers, European planters and mining firms specialised more and more in commodities as they became worth less and less.

Does this mean that European colonisation locked Africa into a path of perverse specialisation? There are two plausible answers to this question: “yes” and “no”. The “yes” view is that expanding imports of European manufactures, coercive cultivation and mining schemes, and free-trade policies effectively pre-empted a diversification of African economies into manufacturing and eroded indigenous handicrafts. Only white-dominated settler economies that were able to operate with some degree of autonomy, such as South Africa and Southern Rhodesia, managed to develop a substantial industrial sector, albeit relying on a combination of protective barriers and African labour coercion. The alternative answer is “no”. Colonial trade simply followed a path that had already been blazed in the early 19th century. Manufacturing was inconsistent with African endowments and thus its comparative advantage. With abundant land and mineral resources, and scarce labour and human capital, commodity specialisation was the most efficient way to exploit world trade, and to move up the technology and skill ladder (Austin et al. 2016). The debate between these two competing views has not yet been resolved.

Today, China uses diplomacy in Africa instead of brute force, and it does not seem to aspire to formal political control in the region. Yet, African economies are again responding to the rising demand for commodities by a rapidly industrialising power. Chinese investments in land, infrastructure and mines are flowing in. Mineral exports, and especially oil, are again taking a growing share of African exports. History shows that such export booms are unsustainable, but what are the chances that Africa will avoid a renewed cycle of commodity dependency? As we ponder the answer, a major difference with history should be noted. With a projected population of over 3 billion, Africa will be one of the most populous regions of the world in 2050. If African policymakers find ways to invest commodity windfalls in the health and education of the next generations and to increase trade with neighbour countries, export growth may do more to stimulate African economic development than it did a century ago.

Austin G, E Frankema and M Jerven (2016), “Patterns of Manufacturing Growth in Sub-Saharan Africa: From Colonization to the Present,” forthcoming in K O’Rourke and J G Williamson (eds), The Spread of Modern Manufacturing to the Periphery, 1870 to the Present, Oxford: Oxford University Press.

1 These data will be made available as part of Wageningen African Commodity Trade Database, 1500-present, to be released in the autumn of 2015 at the website of the African Economic History Network, www.aehnetwork.org

Author: Ewout Frankema is professor and chair of Rural and Environmental History at Wageningen University and elected member of the Young Academy of the Royal Dutch Academy of Arts and Sciences. Professor Jeffery Williamson is the Laird Bell Professor of Economics at Harvard University. Pieter Woltjer is a postdoc researcher at Wageningen University (department of Rural and Environmental History) where he is currently working on the study of long-term African welfare development.

Image: A woman walks by the beach of Kenya’s coastal city of Mombasa. REUTERS/Marko Djurica.