How does news analytics affect the stock market?

In recent years, sophisticated institutional traders in financial markets have increasingly used new sources of information such as ‘sentiment’ indicators derived from news wire articles. Such news analytics are created by computer algorithms and can tell traders within milliseconds whether an article is positive or negative and contains relevant information about a firm’s value. In parallel with this, the growth of computerised trading has accelerated the process of accessing such information and increased the speed with which it is incorporated into stock prices. Access to such low-latency ‘meta information’ – ‘news about the news’ – can provide a competitive advantage to its users, which are mainly high frequency and algorithmic traders like hedge funds. However, inaccurate low-latency signals can lead to unintended consequences when algorithms automatically initiate trades based on inaccurate information. For example, in April 2013 an incorrect twitter feed about a White House explosion caused a mini flash crash in US markets. Some quickly blamed algorithmic trading for the reaction, while others argued that human traders were mainly responsible.1 In any case, news reading algorithms may be more likely to misinterpret news than human traders.  Thus, understanding the magnitude of the price effects associated with such meta information is critical for policymakers concerned about financial market stability.

In July 2013, New York State Attorney General Eric Schneiderman rebuked Thomson Reuters for selling access to key economic survey data two seconds earlier to some high-frequency algorithmic traders than to other customers. Unlike the early release of such economic survey data, however, news analytics are based on publicly available news. Therefore, they constitute a ‘fairly earned’ advantage. However, since news analytics enable faster trade based on public information, they give a trader a similar advantage as would early access to private information. In either case, an important question is whether quick-triggered trading initiated by such low-latency information has an impact on the market that is distinct from the underlying informational content of the news. That is, are there potentially distortionary price effects induced by high frequency trading based on news analytics? It seems that only the existence of such distortions should justify regulatory intervention.

A large academic literature has studied the effects of the information from traditional media sources on stock prices (e.g., see Tetlock 2007, 2011, Fang and Peress 2009, Dougal et al 2011, Engelberg and Parsons 2011, and Peress 2013). Others (e.g. Riordan et al 2013, Gross-Klugmann and Hautsch 2011, Sinha 2012, Zhang 2013) have investigated the market reaction to news analytics but are unable to demonstrate a separately identifiable influence of the meta information in news analytics that is distinct from the information in the underlying news on which it is based.  In a new working paper, we are able to identify the causal effect of meta information (von Beschwitz et al 2015).  We exploit differences in the high frequency signals derived from Dow Jones Newswire stories between older and newer versions of Ravenpack, one of the major providers of news analytics. We use the corrected and back-filled signals from the new version of RavenPack to proxy for the ‘true’ informational content of the news, while traders actually reacted to the original signal that was released in real time. The differences in stock market response between the ‘true’ and real-time versions of the news analytics enable us to study the causal impact of meta information. While such differences were rare in a relative sense (roughly 3% of our sample), their absolute number of 24,963 is high enough to allow for tests that have sufficient power. 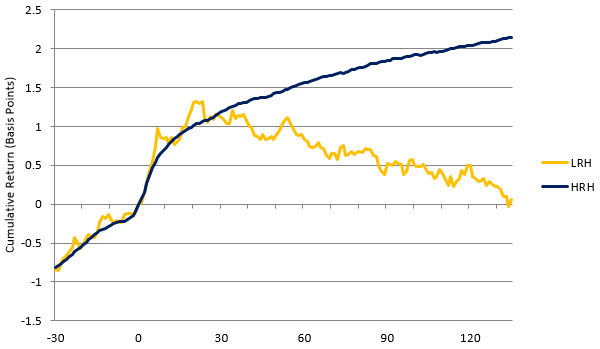 Notes: This figure displays the cumulative return from t-30 to t+120 seconds around the articles. Returns are multiplied with the sentiment direction of the article. HRH refers to articles that have high relevance according to both versions of RavenPack. LRH refers to articles that are marked as having low relevance in the older RavenPack version (which was released to the market), but marked as having high relevance in the newer RavenPack version.

In this paper, we study how the information delivered by news analytics companies affect the stock market and, in particular, how this alternative delivery mechanism affects liquidity and market efficiency. This question is important, because news analytics are a major source of information for institutional investors, which are responsible for the majority of the trading volume in the market.

Our findings show that providers of media analytics have a significant impact on the market that is separate from the information contained in the news. These findings have normative implications in terms of the recent regulatory debate on high-speed delivery of information and the effects of algorithmic trading. They show that news analytics improve price efficiency, but at the cost of reducing liquidity and potentially distortionary price effects.

Hagströmer, B, and L Nordén (2013) “The diversity of high frequency traders”, Working Paper.

Peress, J (2011) “The Impact of the media in financial markets: Evidence from newspaper strikes”, Working Paper.

Sinha, N R (2012) “Underreaction to news in the US stock market”, Working Paper.

Authors: Bastian is an economist at the Federal Reserve Board in Washington DC. Massimo Massa is the Rothschild Chaired Professor of Banking and Professor of Finance, INSEAD. Donald B. Keim is the John B. Neff Professor of Finance and Director of the Rodney L. White Center for Financial Research at the Wharton School, University of Pennsylvania.

Image: The September 17 and 18 curves are seen on the board at the Australian Securities Exchange (ASX) in Sydney September 18, 2008. REUTERS/Daniel Munoz.

Americans turning more to local news since the COVID-19 crisis

During the COVID-19 coronavirus pandemic, research from Pew has shown that Americans are leaning towards local news sources instead of national ones.

Reliable information becomes vital during crises like the coronavirus pandemic. We all have a responsibility to disseminate accurate sources.

Bigger and bolder: 20 years of supertall skyscrapers in one chart

This is how COVID-19 is affecting the advertising industry