3 lessons from brewing Heineken in Africa

When Jean-François van Boxmeer was appointed in 2005 to lead Heineken, the third-largest brewer in the world, he was one of the youngest CEOs in the company’s history. By 2014 Heineken had grown into a $20 billion-in-revenue company, producing almost 200 million hectoliters of beer.

Surprisingly, though, van Boxmeer had not spent many years of his career in Amsterdam, where the company’s headquarters are located, or in the US, the company’s largest export market. Instead, he spent his first decade in Africa, in countries like Gabon, Rwanda and Congo.

There, he says, far removed from the typical “New York-London axis”, he learned his most important career lessons, which later in life helped him climb the corporate ladder. The full story of his adventures there will appear in “Before I Was CEO,” my upcoming book on career advice from business leaders, but here’s a preview:

If you want to get, you have to give

It might sound like the most straightforward lesson of them all. But van Boxmeer says it like he means it – and once you hear why, you won’t be surprised. He worked in Rwanda in the early 1990s, just before the genocide, and then moved to Congo, where a refugee crisis broke out after Rwandans fled their country.

In environments like those, he was forced to make unconventional but deeply human decisions. Among the Rwandan refugees in Congo, for example, were many of Heineken’s Rwandan employees and their families. As general manager of Bralima, Heineken’s business in the Democratic Republic of Congo, van Boxmeer decided the company would help all of them to find shelter and provide for them and their families, as they were deprived from their income in Rwanda. It was financially a nonsensical decision, as it meant that many of the company’s resources would go to humanitarian aid, rather than running the company.

But it was the only decision, van Boxmeer says. “If you work with people, you have no other choice than to give, or you’ll fail,” he says. “It’s very important, even if it isn’t easy, because the larger the company, the larger the stakes. But you have a social contract with your own personnel. It’s one of the crucial elements for a leader to remember and live by.”

“If you’re faced with a situation you can’t control, you have to learn to accept it and decide how to deal with it,” says van Boxmeer. “But the first lesson is that you always have to remember to deliver the goods.”

He faced such a situation in Democratic Republic of Congo, when due to hyperinflation, Heineken risked either not being paid, not being paid enough, or not being able to deliver. “For sure, I couldn’t sweep the hyperinflation under the rug. It was a given. In that case, “I had to surf the wave, because I couldn’t break the wave. I had to make sure I delivered my own goods, and then make sure I got paid. It’s what I did. I delivered the beer, and asked to get paid the day price on arrival. I took the exchange risk, but not the credit risk. I preferred it that way, rather than asking for dollars, and risking not getting paid, or not being able to deliver myself. Luckily, it worked out well.”

Did it work out well because he asked to be paid in cash on arrival? Or did it work because he always kept his end of the deal? For van Boxmeer, it was both. But he started by delivering himself.

In less fragile markets, when leadership became more about “telling the story”, van Boxmeer says he remembered to also “deliver” as a manager. If not, he says, you would be a charlatan. So, he says, you have to do both: “You have to tell the story, tell where you’re going, tell people to be proud and happy, and also deliver. You have to at least be able to manage, and you have to be that leader, too.” 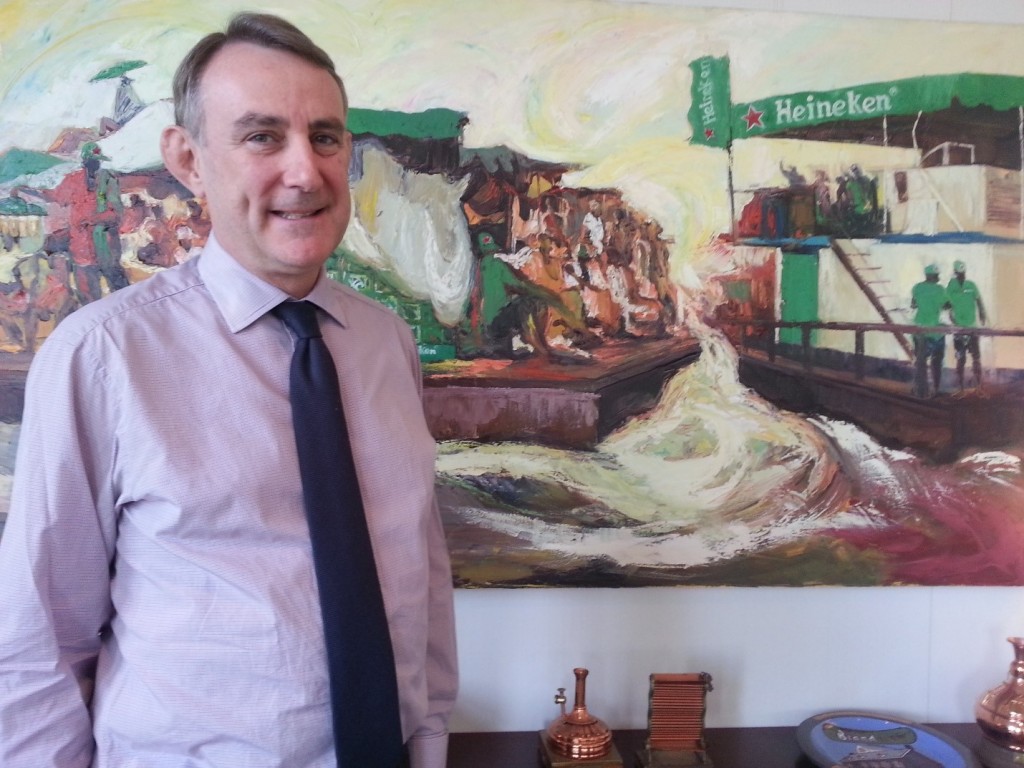 Heineken CEO Jean-Francois van Boxmeer poses next to a painting in his Amsterdam offices in April 2014.

If you fail: admit, apologize, repair

To err is human, even when you are a professional manager. But what matters more is how you deal with those failings afterwards. Crucially, you should start by owning up to your mistake, then apologize for it, and finally try to rectify it.

Van Boxmeer learned that lesson when launching the Amstel brand of beer in DRC. By the time he launched the brand, van Boxmeer was already a well-regarded high potential young manager in the Heineken company. But unfortunately, he says, the Amstel launch was a complete failure.

“We had a lot of successes, but this wasn’t one of them. So we did what we had to do: We admitted we were wrong, stopped the launch, apologized and moved on by concentrating on our other brands. It was a ‘brand too far’. We lost a lot of money, but we learned from our mistake and didn’t repeat it. And that was the end of it. You can’t always be successful.”

Van Boxmeer went on to work in Poland and Italy before becoming the company’s global CEO in 2005. But it was the lessons he learned in Africa in those first years of his career that followed him throughout to the top job.

Image: Jean-Francois van Boxmeer (2nd R), chairman of the board and CEO of Heineken International and co-chair of the World Economic Forum on Africa (WEFA), and Nicolas Vervelde (3rd R), managing director and CEO of Nigeria Breweries, address the press during a pre-WEFA conference meeting in Abuja, May 7, 2014. REUTERS/Afolabi Sotunde

How has COVID-19 hit Africa? Here's what the data tells us

Here are some some key findings from Africa's epidemic, in addition to what we can learn from these in preparation for future pandemics.

Strengthening restoration monitoring systems in Africa is critical - here's why

On the road to recovery: How Sudan is saving its water sector