Lessons on growth from 1300 years of Japanese history

Until recently, most accounts of long run economic growth and development were either qualitative or relied on the estimates of Maddison (2001), which were based largely on conjecture and focussed on the years before 1820. In fact, a surprising amount of quantitative information has survived, reaching back as far as the medieval period in Europe and further still in parts of Asia that did not experience a so-called ‘Dark Age’. This information is now being used to provide a new generation of historical national accounting studies, which are beginning to transform our understanding of long run economic development.

These data suggest that the old Malthusian view of centuries of stagnation before a sudden transition to a path of continuous, sustained growth is no longer tenable. Rather, most countries experienced a recurrent pattern of positive growth episodes, followed by growth reversals, so that there was no long run trend in per capita incomes (Malanima 2011, Álvarez-Nogal and Prados de la Escosura 2013). The transition to modern economic growth occurred gradually as growth reversals were dampened and eventually eliminated. This transition occurred first in Britain (Broadberry et al. 2015a).

For Japan, we can retrieve written records containing quantitative information back to the Nara period in the eighth century. The approach taken by Bassino et al. (2015) uses existing population estimates and reconstructs GDP from the output side, with separate estimates for agriculture, industry and services.

Agricultural output is estimated from information in temple and government records and old encyclopaedias. Agricultural estimates can be estimated from the supply side using data on the cultivated land area multiplied by crop yields. After 1600, data on crops harvested also became available and so we can also make use of this data for the years following 1600. This can then be cross-checked against estimates of the demand for food derived indirectly from data on population, wages and prices.

A number of authors have recently used the share of the population living in towns as a measure of the growth of the non-agricultural sector when measuring GDP per capita in European countries. However, there is a major problem with applying this method to Japan, because the urbanisation rate declined from the mid-seventeenth century, which is widely seen as the key period of proto-industrial growth. The decline in the share of urbanisation followed a sharp increase at the beginning of the Tokugawa shogunate as a result of the introduction of the ‘Bakuhan’ system – nased a principle of separation between peasants in the countryside and warriors in towns, with merchants and artisans also being required to reside in towns. However, the separation between peasants and the commercial classes was less strictly enforced than that between peasants and the warriors, allowing the growth of proto-industry in the countryside. The solution adopted here is to allow secondary and tertiary output to vary with population density as well as the urbanisation rate, with the scale of this effect estimated from cross-sectional data for the late nineteenth century. 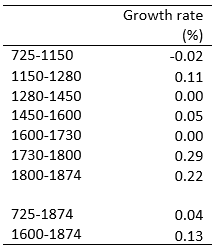 Table 1 shows annual growth rates of Japanese GDP per capita over the period 725-1874 and a number of sub-periods. Over the whole period, GDP per capita grew at an annual rate of 0.04% and, as in Britain, this growth was persistent from the medieval period onwards, with periods of strong positive growth that were not followed by sustained growth reversals. The major periods of positive per capita GDP growth occurred during 1150-1280, 1450-1600 and again after 1730. This latter period of growth during the late Tokugawa period led on to a further acceleration in the rate of growth as Japan made the transition to modern economic growth during the Meiji period.

It is interesting to note that the first economies to make the transition to modern economic growth at the two ends of Eurasia, Britain and Japan, both built on earlier gains reaching back to the medieval period. This suggests that the key to understanding modern economic growth lies in identifying the forces which dampened growth reversals rather than the forces responsible for the initiation of a growth phase.

Implications for the Great Divergence debate

The level of GDP per capita in Japan is shown in Table 2, expressed in 1990 international dollars, widely used for international comparisons since the work of Maddison (2001). It is helpful in interpreting these data to note that the World Bank’s poverty line in 1990 was set at $1 per day, which means that an economy with most people living at bare bones subsistence – apart from a small, rich elite – would be expected to have a per capita GDP of around $400. Per capita income in Japan was not far above this level in 1150, but by 1280 was at more than three quarters of the British level. However, following the Black Death of the mid-fourteenth century, which led to a roughly 50% increase of per capita incomes in Britain, Japan fell further behind. By the mid-fifteenth century, Japanese per capita incomes were around half the British level. Between 1450 and 1600, per capita incomes grew substantially in Japan while stagnating in Britain, so that the gap narrowed. With accelerating British growth from the mid-seventeenth century, however, the gap widened, despite a further burst of growth in Japan from the early eighteenth century, so that by the mid-nineteenth century per capita incomes in Japan were little more than a quarter of the British level. In 1850, Japan’s GDP per capita was $800, twice Maddison’s definition of bare bones subsistence. From this level, Japan was in a position to make the transition to modern economic growth after the institutional reforms introduced following the Meiji restoration of 1868.

However, it is not sufficient to compare Japan with Britain, since Britain was a relatively poor part of Europe in the thirteenth century and a relatively rich part by the nineteenth century, as can be seen from Table 2. The reversal of fortunes between the North Sea area economies of Britain and Holland, and the Mediterranean economies of Italy and Spain is sometimes known as the Little Divergence. It is less well-known that there was also an Asian Little Divergence, with Japan overtaking China and India. The Great Divergence between Europe and Asia occurred at the same time as the Little Divergences within both Europe and Asia. The Great Divergence is therefore not a simple story of a dynamic Europe pulling ahead of a stagnating Asia. Rather, both continents contained both dynamic and stagnating parts. What mattered for the Great Divergence was the fact that the most dynamic part of Asia was falling behind the most dynamic part of Europe until the late nineteenth century.

One other implication for the Great Divergence debate which is worth noting is that the focus on China seems to have led to an unfortunate neglect of Japan. China clearly was important within Asia because it had a large population and because it was probably the richest economy in the world at the time of the Northern Song dynasty. However, China continued to stagnate long after Japan had become the first Asian economy to make the transition to modern economic growth. To see the Great Divergence as a nineteenth century phenomenon, as in Pomeranz (2000), overlooks important changes within Asia as well as within Europe, and underplays the achievements of medieval and early modern Japan in laying the foundations of modern economic growth. This gives the misleading impression that Japanese development in the nineteenth century was dependent only on importing technology and ideas from outside Asia, whereas in fact it also built on dynamic forces internal to Asia, which are already visible in the success of the Japanese economy in ending growth reversals.

Maddison, A (2001), The World Economy: A Millennial Perspective, Paris: Organisation for Economic Co-operation and Development.

Image: Japan’s Mt Fuji is seen through the skyscrapers of Tokyo. Reuters.

Geopolitics and investment in emerging markets after COVID-19

The pandemic has opened up an opportunity for international investors and companies to invest in infrastructure in emerging markets.

Japan has bid farewell to Shinzo Abe, after serving 8 years as Prime Minister. Yoshihide Suga is ready to replace him, but as Akira Kawamoto writes, it won't be easy.

These are the world’s most peaceful regions in 2020