The 20 countries with the greatest public debt

Japan, the world’s most indebted nation, is struggling to emerge from over two decades of stagnation. Greece, second in the list, is suffering a critical economic crisis. According to the IMF.

Since the early 1990’s Japan has experienced continuous stagnation. Recently, policies put in place by the Government to tackle the crisis have tended to push debt levels even higher. Currently, the Japanese Government is spending almost half of its total tax revenue on tackling the enormous debt. In spite of this, the yield on 10-year Japanese bonds remains at a surprisingly low level, under 1%.

Greece has accumulated a massive debt. On 14 July 2015, the IMF released a report addressing Greece’s debt sustainability. The introduction in the report gives an accurate image of the country’s situation:

Greece’s public debt has become highly unsustainable. This is due to the easing of policies during the last year, with the recent deterioration in the domestic macroeconomic and financial environment because of the closure of the banking system adding significantly to the adverse dynamics.

The financing need through end-2018 is now estimated at €85bn and debt is expected to peak at close to 200 percent of GDP in the next two years, provided that there is an early agreement on a program. Greece’s debt can now only be made sustainable through debt relief measures that go far beyond what Europe has been willing to consider so far.

Here are the 20 countries with the highest public debt: 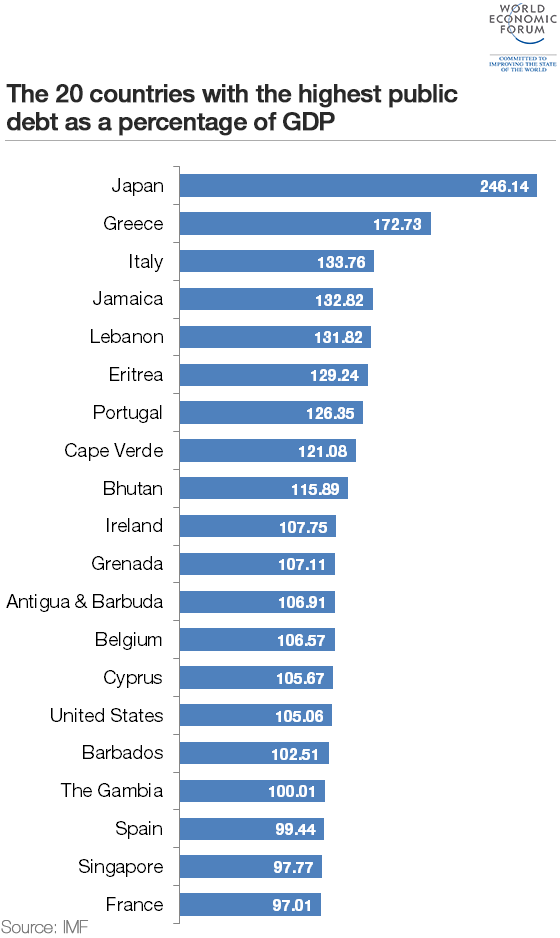 Image: The Japanese national flag is seen near a monitor displaying the exchange rate of the yen against the dollar REUTERS/Thomas Peter

Russia’s invasion of Ukraine signals the emergence of new era of geopolitics with heightened fears over security, economics, energy, and ideological interests.

Is there a future for globalization? Business leaders discuss at Davos 2022