China’s domestic stock market has been in freefall. The Shanghai Composite index has dropped 30% from its 12 June peak. Investors are understandably concerned about what the steep falls suggest about the health of one of the world’s fastest growing economies. Their fears have only been compounded by the failure of the Chinese authorities to halt the slide. Even efforts by the country’s brokerage firms to engineer a multi-billion dollar bailout of the market by purchasing blue-chip stocks, suspensions of stock sales and measures to allow investors to use their houses as collateral to fund margin calls have failed to prevent the drops.

So what’s really going on?

The reality is that there have long been concerns about whether the Chinese market was entering bubble territory. Up to June this year the Shanghai Composite had surged by around 150% over a 12-month period, a staggering performance considering China’s slowing growth. 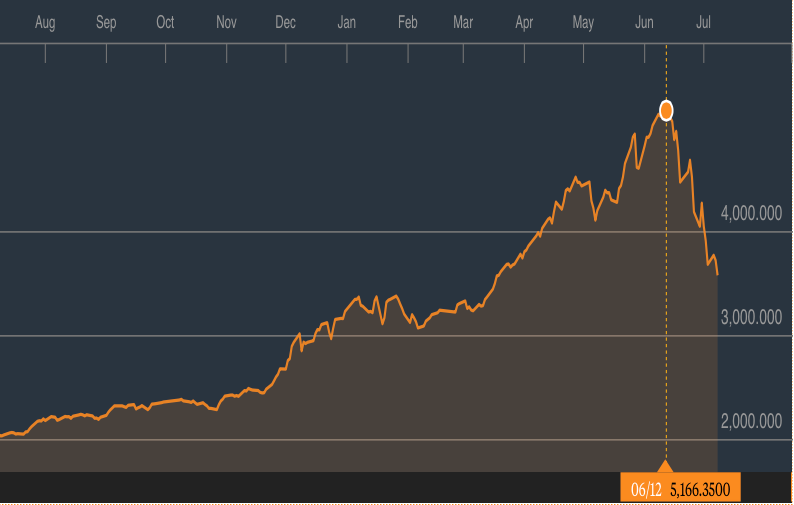 Some form of correction was perhaps inevitable. Traders had leveraged themselves up to invest even more heavily into the market and then struggled to unwind their positions as the market dropped. According to George Magnus, former chief economist at UBS, margin debt levels have risen seven-fold.

High margin debt means that investors are subject to higher margin calls when the stock market falls in value.

What margin calls mean is basically that as the market falls lenders ask borrowers to deposit more cash or collateral against their positions which many seek to fund by selling shares – helping to drive the market down further and increase the amount they have to deposit again. Some analysts think that we might be only about a quarter of the way through this process, and, as such, there could be plenty more down days for the stock market to come.

What prompted the stock market boom?

To understand the boom in equity prices, we have to understand what has happened over the past few years to drive interest in them from Chinese investors. Here the real estate market is critical to understanding what happened.

This is how the story goes: The Chinese property market underwent a massive boom between 2012 and 2014 – and an equally dramatic reversal (see the chart below from the World Bank): 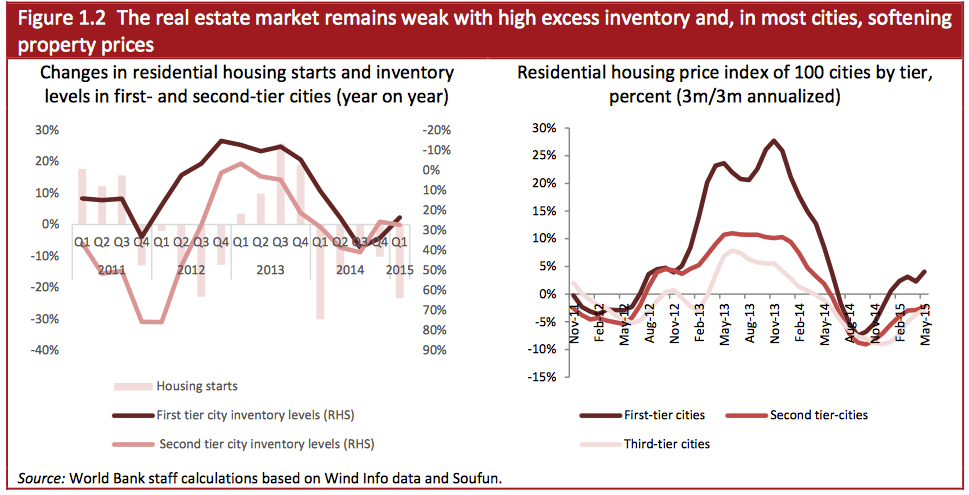 In part the property market crash reflected government efforts to rein in excessive credit growth and also (related) a huge mismatch between supply and demand for property. The process of unwinding these phenomena, however, took a heavy toll on local government finances, which relied on the proceeds from land sales to pay off their large off-balance sheet debt burdens.

What does a property market crash have to do with the stock market?

The consequences of this have been two-fold. First, the hit to local government balance sheets and the unwinding of the property oversupply have slowed the rate of investment in the country. This can be seen as a positive step in allowing the supply/demand gap to close and bursting the real estate bubble in a controlled manner, but it also has spill-over impacts on economic activity with investment spending falling and China struggling to meet the government’s target of around 7% GDP growth this year.

Moreover, many of the debts built up during the boom ended up with local governments via Local Government Financing Vehicles (LGFV). Such was the scale of the problem that the Chinese finance ministry arranged a RMB 2 trillion local debt swap to increase debt duration and lower interest costs.

The government has also attempted to stabilize the real estate market directly through purchases of unsold properties. As Barclays said in a note: “Although a disorderly correction is not expected, given that the real estate sector is too important (to the Chinese economy) to fail, many look for a multi-year adjustment process and say that a gradual slowdown in property investment is their base case… The government’s latest plan to purchase unsold residential properties and convert these units into low-cost public housing is seen as a practical way to reduce inventory levels.”

In other words, when it came to it the state ultimately stood behind the property market to prevent a rout.

What about private sector investors?

The flipside of a property boom is a huge amount of credit (money) creation by the Chinese banking system, which helped to increase the already high saving rate in the country.

The property bust cut off the sector as a viable investment opportunity for domestic investors, but left a lot of money on the sidelines looking for similarly positive returns.

As such while local governments took most of the pain from the real estate falls, private sector players ended up with a lot of spare capital to invest following the boom. And with the property sector looking unappealing, much of this capital appears to have made its way into the stock market (encouraged by supportive noises from state media).

So what does that mean for the future?

Look at the timing of the recent rally compared to the property market performance in the chart above — it began as the property slump reached its nadir: 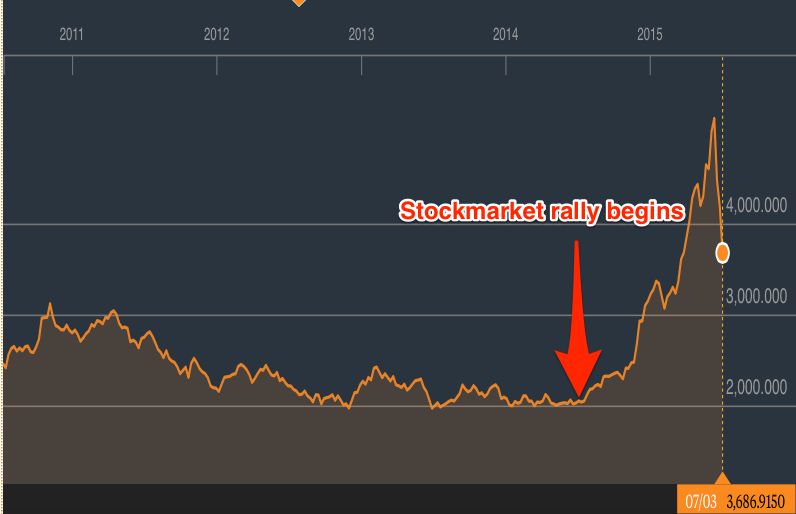 The point here is that the timing is no coincidence. China is trying to manage a transition from export-driven growth towards a more balanced economy with rising domestic demand. This process will inevitably involve a slower pace of growth than in the recent past.

However, the authorities appear instinctively cautious of liberalising markets too swiftly in order to hit short term growth targets and appear to want to prevent “hard landing” scenarios for domestic investors. This can give people the impression that asset markets are one way bets — a mindset that could result in the type of overoptimism that would cause investors to ramp up margin debt in order to increase their gains even though it exposes them to significant downside risk.

Following years of state over-investment China remains a country with a huge amount of savings, but fewer and fewer productive places to invest them domestically and record low interest rates elsewhere mean there are equally few appealing opportunities abroad.

In other words, we should expect more volatility to come from the country’s asset markets.