A snapshot of Africa’s top 30 universities

AS the Times Higher Education (THE) Africa universities summit kicked off July 30 at the University of Johannesburg, South Africa, the main buzz of the event was the landmark unveiling of a new African university ranking. 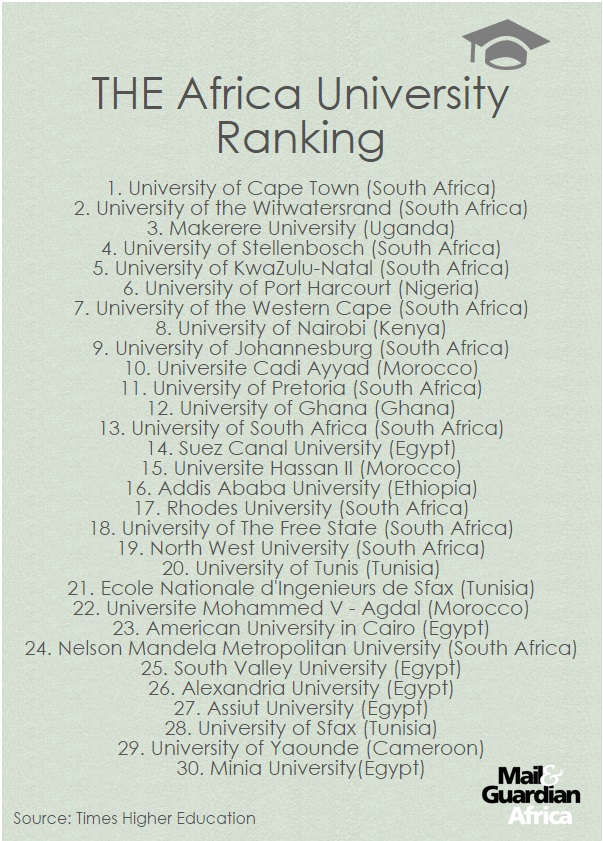 These results are essentially based on the amount of citations there are for the university’s work. They are derived from the methodology for the current world university ranking, using the 13 factors (below), combining THE’s own enormous database of statistics along with the Elsevier’s Scopus database – a system that highlights some of the continent’s top performers in terms of how often research papers are referred to and cited by other academics globally. This methodology is designed for the research-led globally facing university. Times Higher Education emphasised that not everyone in Africa will find the metrics appropriate to their mission or their strategic priorities making this ranking a starting point of a longer, inclusive conversation involving African institutions.

One of the big surprises was the omission of several African universities that have consistently featured high up on global ranking lists. Namely; Cairo University, University of Ibadan, University of Nigeria and Al-Azhar University in Egypt.

In an interview with M&G Africa, Phil Batty – Editor of the Times Higher Education World University Rankings – explained that even though they have spent the last 4-5 years modifying and refining a methodology that would be better suited to an African, as opposed to a global, ranking – “there’s still a long way to go”. He said that what THE has “created is a snapshot of research strength”.

Batty was also candid about the lack of extensive data in creating this first THE Africa university ranking. That this is “the very start of the story. [Because] world rankings are driven by research, innovation and tech development, we need to work with African universities on [indicators such as] their teaching and graduate success…the rankings we’re publishing are actually very much the starting point. We want to use this conference to convince universities to start collecting and sharing data more consistently.”

The ranking comes at a time when Africa’s universities are looking to experience a period of revitalisation, with a booming middle class and concentrated pan-African efforts – such as the Higher Education Summit in Senegal earlier this year – aimed at addressing their challenges. Yet, African universities have become lost in global rankings – measured against institutions in the rich, developed world which continue to dominate the leagues and without focused efforts that look to finding metrics which are appropriate to the African context.

One of the key actors in the creation of this Africa ranking is the University of Johannesburg.

In an interview with M&G Africa, Professor Ihron Rensburg – the Vice-Chancellor and principal of the University of Johannesburg – explained that, as part of the University’s 10th anniversary, they engaged THE to say “we have an apparently shared ambition, first you have a series of conferences where you create the opportunity for universities to reflect, [engage in] dialogue and debate on the state of universities in order to ramp up excellence in teaching and learning and research – we as the University of Johannesburg  – share that driving ambition and that is important for us that Africa’s universities pursue global excellence and stature in internationalisation, collaboration, teaching and research.”

He emphasised that the University of Johannesburg “effectively founded and conceptualised the idea and asked [THE] to do it jointly – [bringing] together our driving ambition and creating a forum for African Universities to debate and dialogue.”

Image: Barcode labels are seen inside rare books ahead of digitisation at the Municipal Library of Lyon in this January 15, 2010 file picture. REUTERS/Robert Pratta/Files

Innovative local solutions can create a green future for the Sahel

Bright young entrepreneurs and the funders and investors supporting them are driving collaborative action to increase the chance of a green, healthy future for the Sahel.

Despite hosting 60% of the world's arable land, Africa is a major food importer. As the war in Ukraine rages, the continent faces another food crisis.