Here is why Europe needs to act on unemployment

Of all the discussions over the challenges faced by the Eurozone since the financial crisis, none are perhaps as important than tackling the threat of long-term unemployment.

The problem with keeping people who want to work out of employment is that, over time, their skill sets can become outdated as the nature of jobs changes, they can be pushed into low productivity jobs that do not take advantage of their potential or, worse, they can become so demotivated that they stop seeking work altogether.

In economics, these are called hysteresis effects. The longer people remain out of work, the greater the chance that these effects will lower the potential growth of an economy and increase the structural level of unemployment (the share of working-age people who are unlikely to ever return to work).

Over seven years since the onset of the financial crisis, the unemployment situation in the Eurozone remains a big concern. As of June this year the unemployment rate across the euro area was 11.1%, compared with 5.3% in the United States: 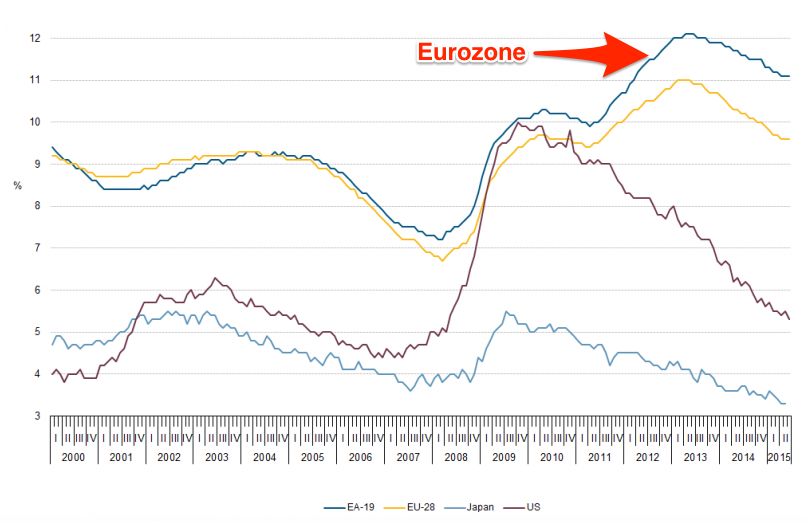 Even allowing for the fact that US unemployment has been considerably lower since 2000, the chart above illustrates just how poor the labour market recovery has been in Europe.

Of course, the story for Europe is not as simple as that headline figure would suggest. Within the euro area there is a wide divergence of labour-market slack between member states with unemployment in Germany (4.7%) and the Czech Republic (4.9%) the lowest, and the highest in Greece (25.6% in April 2015) and Spain (22.5%).

However, while this may appear to be a national problem for member states, Europe does face a common problem that will require it to put all of its resources (including all available workers) to bear if it is going to be able to overcome it. That is, an ageing population.

Here is a chart from a recent paper by Kieran McQuinn and Karl Whelan showing the demographic outlook for European countries:

What does this mean? The number of working-age people as a share of the total population looks set to decline rapidly over the next few decades, falling from 65.2% in 2013 to around 57.2% by 2040. This means that, on current trends, there will be fewer people producing goods and services to meet the demands of an ever-increasing number of retirees.

As you can see from above, some of Europe’s largest economies, such as Germany, Italy and Spain, look set to be among the worst affected by these demographic shifts.

Without growth in the number of workers, European countries are going to have to rely on significant rises in productivity (the amount of output produced by each worker per hour) just to maintain the modest rates of growth they have produced since the launch of the single currency.

That, however, may prove something of a challenge. A paper for the European Commission projects that, in order for the region to sustain GDP growth of 2.1% (its historical average), productivity will have to rise significantly faster than its pre-crisis pace. 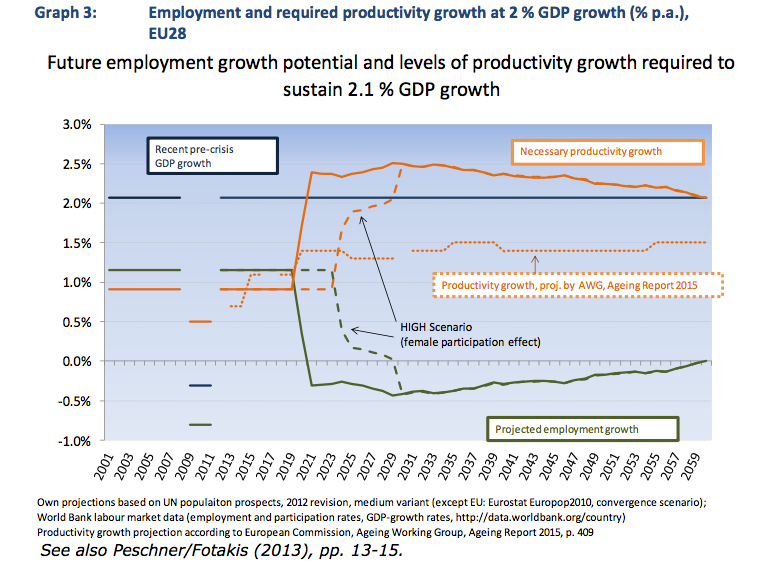 In order to achieve this, thoroughgoing region-wide reforms will need to be undertaken to improve the region’s economic prospects. This means reforms to pensions, so that they don’t impose unsustainable burdens on state finances, as well as comprehensive labour market and regulatory reforms both to further integrate euro area economies and to reduce barriers to business formation and growth.

Key to this will be measures to significantly increase participation in the labour force, including improving labour mobility and female participation (which has plateaued in recent years). Research also strongly suggests that liberalising immigration polices to allow skilled migrants to come to Europe would also help boost both productivity and total output.

Also crucial will be regulatory reform to bring European product markets into line with international best practices and putting pension spending on to a sustainable long-term trajectory.

None of this will be simple to achieve, but while these reforms will have to be tailored to, and implemented at, a national level, the problem must be considered one of greater regional significance. After all, even with all of the reforms outlined above McQuinn and Whelan’s model still suggests total factor productivity growth will fail to reach the rate consistent with recapturing 2%+ annual GDP growth.

Yet the longer that countries endure high levels of long-term unemployment and lack of competitiveness, the greater the risk of damaging European growth potential in the future.

That would set the bar for the scale of reforms needed even higher, and many of those would likely come at the cost of citizens across the continent. The time to act on the blight of persistent high unemployment is now.

Have you read?
Europe’s employment challenges
10 countries with the biggest gender gap
How can Europe be more innovative?