How does China’s stockmarket slump compare to previous crises?

The aftershocks of China’s Black Monday continue to reverberate around the globe. But just how bad are things? Some have likened the situation to the Asian Financial Crisis of 1997, others have expressed fears of a repeat of the Credit Crunch triggered by the collapse of Lehman Brothers in 2008. The Economist has analysed stockmarket history over the past century to see which crash most resembles China’s. 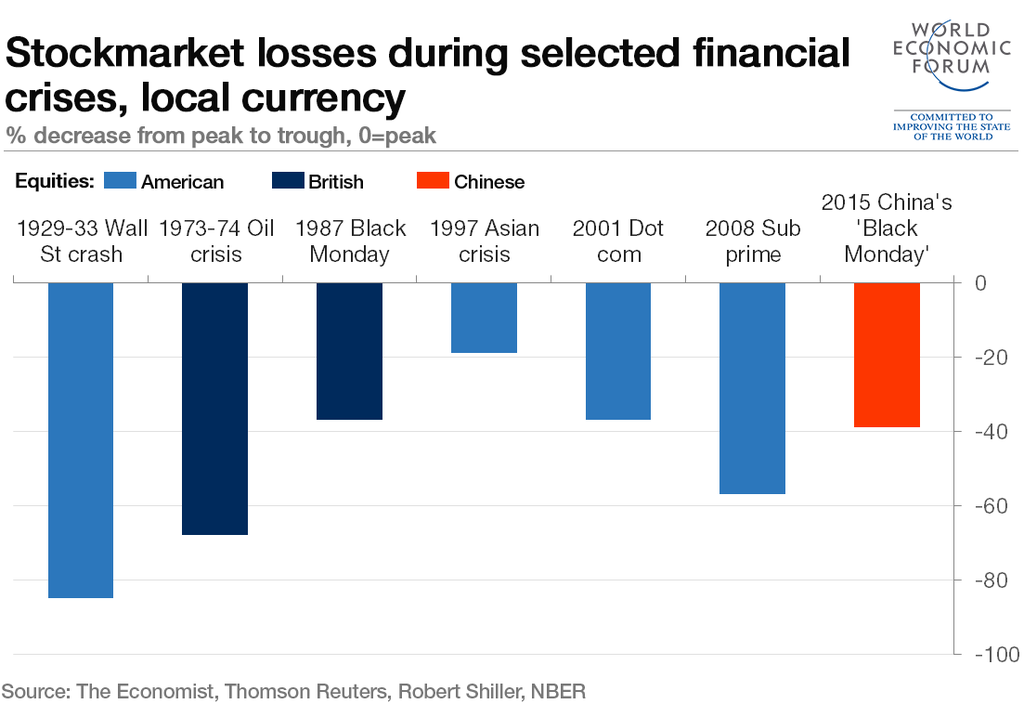 The economic boom of the roaring 20s came to a dramatic stop on Monday, October 28, 1929, when the Dow declined by nearly 13%. On the following day, Black Tuesday, the market dropped almost 12%. It’s considered one of the most devastating stock market crashes in U.S. history and has been linked with the Great Depression. However, modern research has cast doubt on the idea that the Crash was the cause of the deflation and unemployment of the 1930s.

On October 19, 1973, in the middle of the Yom Kippur war, the Organization of Arab Petroleum Exporting Countries (OPEC) put in place an oil embargo on the U.S. The ensuing production cuts nearly quadrupled the price of oil from $2.90 a barrel to $11.65 in January 1974 triggering a global economic crisis. The embargo only lasted 4 months.

The Asian financial crisis marked the end of the ‘Asian economic miracle’. Until July, 1997, there had been huge capital inflows into the region, very fast growth rates, and a run-up in asset prices. The trigger for the crisis was a cut in US interest rates as the American economy slowed. The first country to be hit was Thailand but the crisis swept around Southeast Asia, forcing an IMF-led bailout of Indonesia, Thailand and South Korea in a bid to limit the contagion and insulate the global economy.

The NASDAQ index peaked in March 2000 and then fell by 78% over the next two years as a bubble in the price of U.S. internet-based stocks unwound. The crash prompted a post dot-com bubble recession in 2001, forcing the Federal Reserve to cut interest rates in order to control the situation. This led to thousands of technology professionals losing their jobs and, if they had invested, significant portions of their life savings.

Some speculate that China’s “Black Monday” might be the start of the World’s next biggest financial crisis, comparing it to the global financial crisis of 2008, one of the most dangerous since the Great Depression. The crisis began in 2007 when very high house prices in the U.S. turned downward. Complex financial instruments based on US housing led to damage to US banks and then, after the collapse of Lehman Brothers, to financial markets overseas. Share prices plummeted around the world, the Dow Jones Industrial Average fell 33.8% in 2008 and by the end of the year a deep recession was affecting most of the world.

No assessment of stockmarket slumps would be complete without a reminder that they tend to be followed, after a time, by surges in prices. It’s also the case that a sharp stockmarket sell-off does not necessarily imply there will be weaker growth.

Image: Investors look at stock information on an electronic board at a brokerage house in Hangzhou REUTERS/Stringer