Which countries have the happiest children?

Where are the world’s happiest children? The question is more difficult than you might think. Is it a matter of possessions, wealth, safety or family? Are children in developing nations as happy, or possibly even happier, than those in industrialized nations?

The Children’s Worlds survey attempts to shed light on this issue. More than 30,000 children aged 10 to 12, in 15 countries, were asked about how they spent their time and how they felt about their lives – that is, how they perceive the world, rather than relying on social or economic indicators of their surroundings.

This is not to say there were no economic indicators: children in developing nations owned fewer possessions (here defined through a series of questions ranging from “Do you have your own mobile phone?” to “Do you have clothes in good condition to go to school in?”)

To assess how happy they were, children were told: “Below is a list of words that describe different feelings and emotions. Tick a box to say how much you have felt this way during the last two weeks:

The children were asked to answer on a 10-point scale, ranging from “Not at all” to “Extremely”. 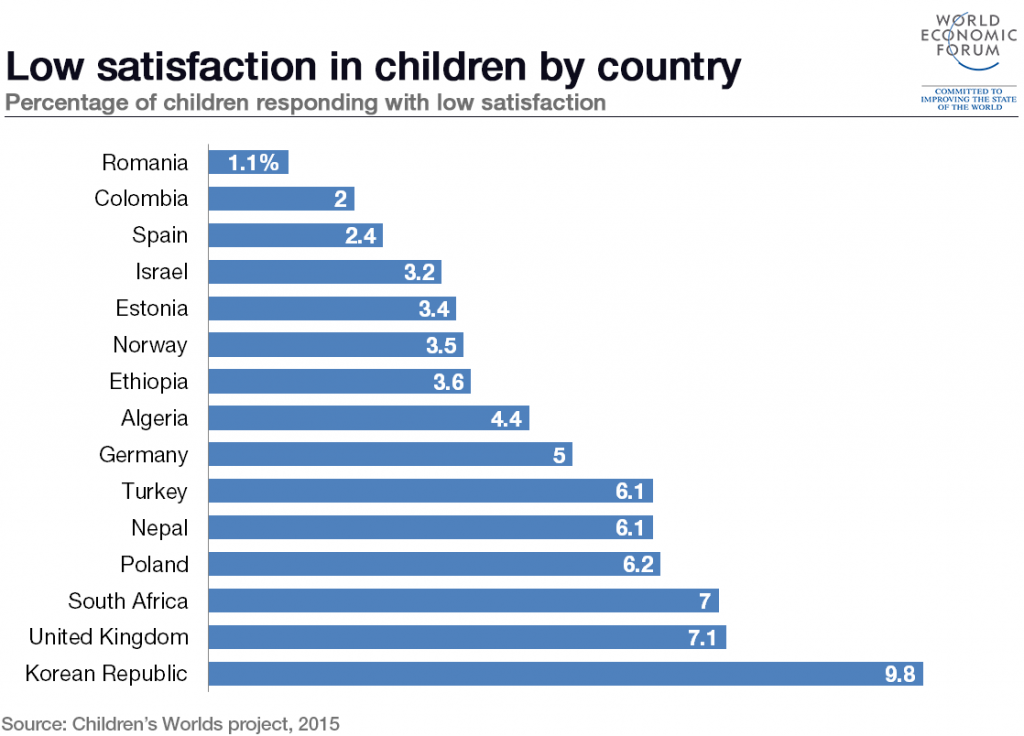 Children were also asked to rate their satisfaction as a whole: 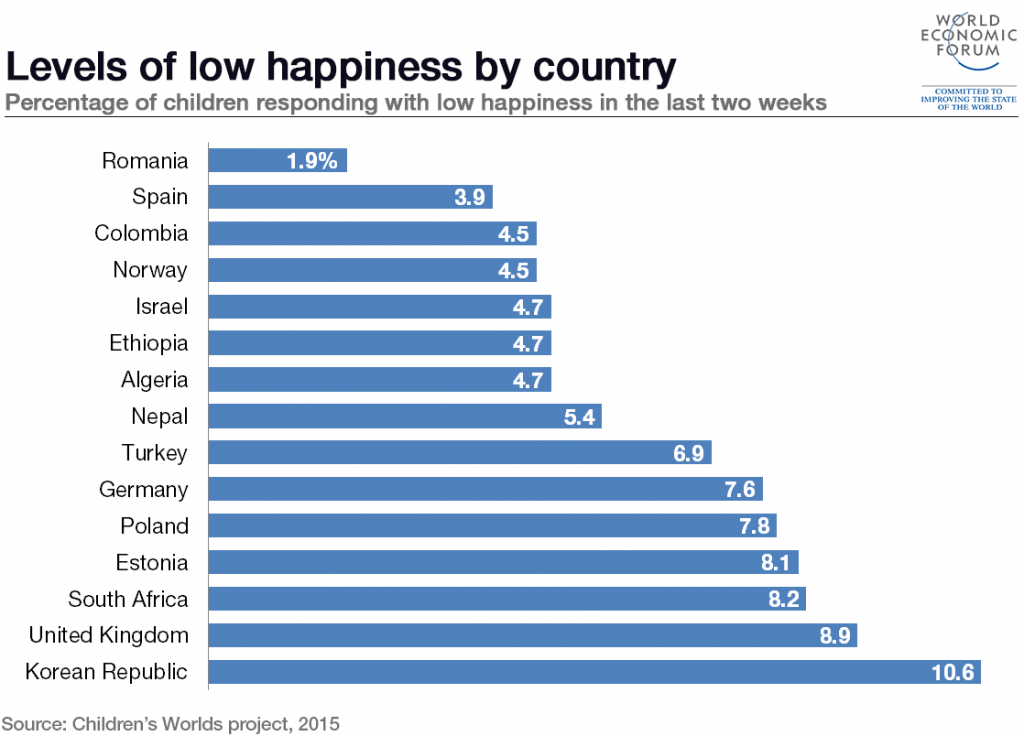 1. Most of the children in the 15 countries rated their satisfaction with life as a whole positively.

3. The percentage of children with low levels of well-being (less than 5/10) varied from less than 2% in Romania and Colombia to over 7% in South Korea and South Africa.

5. Children in northern European countries are particularly dissatisfied with their appearance and self-confidence.

6. Children’s well-being decreases between the ages of 10 and 12 in many European countries and in South Korea.

7. Overall happiness did not vary between girls and boys, but there were significant gender differences in satisfaction with themselves (body, appearance and self-confidence) in Europe and South Korea. Not, however, in the other countries in the survey: Asia, Africa and South America.

8. In terms of living arrangements, well over half (61%) of children in Nepal lived in a household consisting of parent(s) and grandparent(s), whereas in the United Kingdom, Norway and Israel, less than 10% of children did.

9. The percentage of children in some European countries who live in two different homes was high – over 10% in Norway, England and Estonia – a pattern rarely seen in some countries in the survey.

10. Children reported spending more time on homework in Estonia and Poland than in South Korea and England. Children in Poland, Norway and Israel spent the most time playing sports and exercising.

11. In some countries (Algeria, Nepal and South Africa, among others), children spent more time caring for siblings and other family members than in other countries (such as Germany, Turkey and South Korea).

12. There are widely varying levels of knowledge about children’s rights. 77% of children in Norway said that they knew about the rights of children, compared with 36% in England.

Have you seen?
Should children be taught to code?
Human happiness is reshaping cities – video
How happy is the world?