Which countries have the highest rates of youth unemployment?

According to the OECD, the rate of youth unemployment worldwide is nearly a third higher than in 2007 – including increasing levels of long-term unemployment. They argue that a number of steps are needed to improve youth employment prospects, including better and more focused education, improved assistance when transitioning to the workplace and an overall boosts in job creation.

Using 2014 OECD data, the table below shows the percentage of the labour force aged 15-24 who are unemployed. 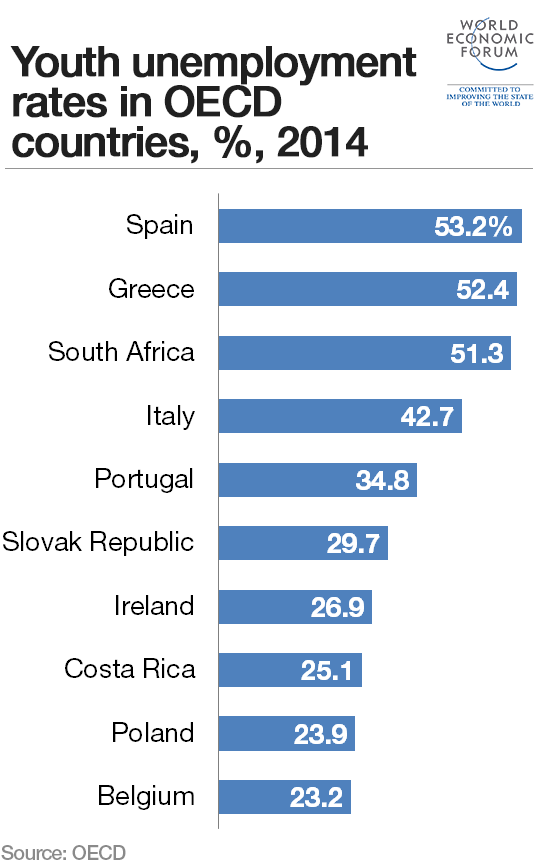 The country with the highest youth unemployment is Spain, with over 53% of their labour force aged 15-24 out of work. Over half of those aged between 15-24 are also unemployed in South Africa and Greece. The list is dominated by European Union members, which occupy eight of the top 10 spots. According to the European Commission, 7.5 million young Europeans are not employed, in education or training (also known as a “NEET”).

This data is taken from the OECD’s Employment Outlook 2015 report. The figures denote the number of people aged 15-24, who have reported they are without work, that they are available for work, and that they have actively searched for work in the last four weeks, as a percentage of the total labour force.

Image: Job offers are seen in this illustration in Milan. REUTERS/Alessandro Garofalo.