Can money buy you happiness?

People have been arguing for centuries about whether or not money can buy happiness. New research provides a fuller understanding of the relationship between what we earn and how we feel.

It may seem a bit obvious: people with higher incomes are, generally speaking, happier than those who struggle. They worry less about paying their bills, they have greater choice in where they live or how they work, and they can provide creature comforts for themselves and their loved ones.  However, wealth alone is not a golden ticket. Indeed, what kind of money one has and how they spend it matters a lot more than a large income.

The basics on happiness
When looking at all of these research results, it’s important to understand what is meant by the term ‘happiness’. Those in the field of happiness research divide it into two components, and individuals need both to be truly happy. But only one of those components keeps improving the more you earn. The other tops out after a certain point.

The first measure of happiness is ‘evaluative’ which can be defined as a sense that one’s life is good— the individual is satisfied with his/her life and feels as though they are progressing towards their goals. This is the measure used by economists Justin Wolfers and Betsey Stevenson who have conducted extensive research comparing economic data and happiness surveys across the world. They have found that in just about every country, rich people tend to be happier than poor people.  Likewise, people in rich countries are happier than people in poor countries. When our basic needs for food, safety, health care, and shelter aren’t met, an increase in income makes a disproportionately larger difference for us than when we are relatively stable financially.  Moreover, those struggling to get by are more likely to experience instability in housing, nutrition, education, and health— all of which leads to pain, stress, and practical demands of a disease or disability so even a small increase in income can alleviate or prevent many of these adverse situations.

The other component of happiness, is known as ‘affective’ and deals with how often individuals experience positive emotions like joy, affection and peace, as opposed to negative ones. Daniel Kahneman and Angus Deaton of Princeton University found a consistent rise in overall life satisfaction as incomes rise, matching the results of Profs. Wolfers and Stevenson.  Yet, when they looked at affective measures, happiness did not rise after a household reached an annual income of approximately $75,000.  Higher incomes are related to a greater sense of satisfaction with life, but not necessarily the positive emotions we associate with happiness.  In other words, people may think their lives are going well while at the same time not experience joy, laughter, comfort, or connection.

So why is that?  How can money have a relatively weak effect on the happiness of wealthier people?

What kind of money do you have?
New research from the Office for National Statistics (ONS) in the United Kingdom suggests that the type of money one accumulates matters a great deal.  The ONS asked people to rate their wellbeing on a scale of 0-10 on a series of questions like ‘overall, how satisfied are you with your life nowadays?’ and ‘overall, to what extent do you feel the things you do in your life are worthwhile?’ 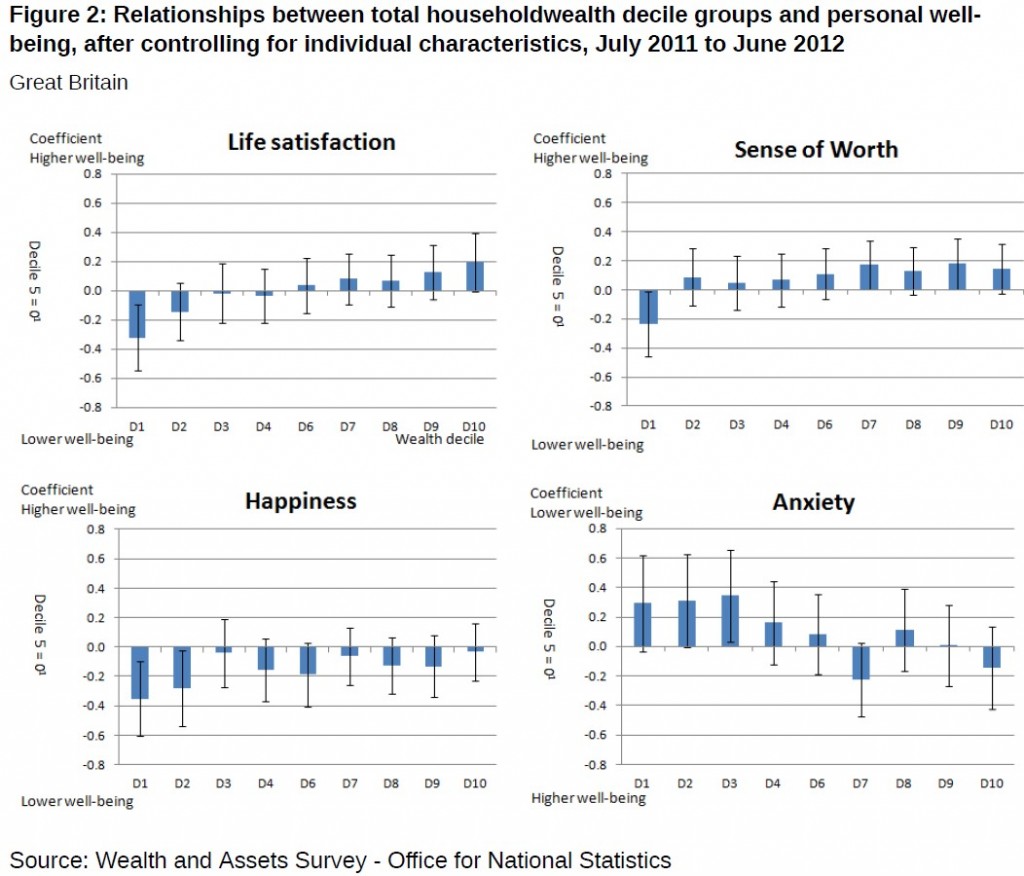 Interestingly, the results also indicated that households with a greater proportion of income coming from state benefits such as housing assistance or a jobseeker’s allowance experienced lower personal wellbeing, with the impact appearing to be “stronger for men than for women,” according to the ONS.

So, yes, money does buy happiness— if it’s the right kind.

How do you spend your money?
If money is used as a pro-social tool—rather than just a medium to greater material abundance— it has a positive impact on well-being and fosters social connectedness.
Numerous studies conducted over the past 10 years have shown that life experiences give us more lasting pleasure than material things.  Associate professor of psychology at San Francisco State University, Ryan Howell, found that people think material purchases offer better value for the money because experiences are fleeting but material goods last longer.  In fact, when people looked back at their purchases, they realized that experiences actually provided better value.

Cornell University psychology professor Thomas Gilovich has reached similar conclusions. People often make the logical calculation that, with a limited amount of money, they can either go on a trip or buy an item.  The trip, people rationalize, is fleeting while the physical item will remain.  While, this is factually true, it is not psychologically true because people experience what is known as “hedonic adaptation”.  Hedonic adaptation describes the experience in which a new material purchase brings a brief thrill or novelty that eventually wears off so that we start to take the item for granted.  A raise at work gives employees a boost, but then their aspirations rise, too. A new car or smartphone seems exciting at first… until you see the new models, with upgrades and you want more.

Experiences, on the other hand, tend to meet more of our underlying psychological needs, because they are often shared with other people, giving us a greater sense of connection, and they form a bigger part of our sense of identity. If you’ve climbed in the Himalayas, that’s something you’ll always remember and talk about, long after all your favorite gadgets have gone to the landfill.

Beyond ourselves, spending money on others can bring the most amount of happiness.  Elizabeth Dunn and her colleagues showed in 2008 that spending money on others (rather than oneself) predicts greater happiness.  Dunn handed out cash to students on a university campus, telling some to spend it on themselves and telling some to spend it on others. Those who spent money on other people were happier than those who treated themselves.  Since then, she has repeated the experiment in other countries around the world, and has altered the experiment to whether people would still be happy if they gave away their own money rather than free money handed to them by a professor. In countries as diverse as Canada, South Africa, and Uganda, the experiment showed that giving away money consistently made people happier. This even held true when they themselves were relatively poor.

Dunn also worked with economists to analyze survey data from 100 countries in the Gallup World Poll, and found that people who donated money to charity were happier, in poor and rich countries alike.

So what’s the bottom line?  When you don’t have much money, a little extra can go a long way, because you have more essential needs to fulfill. As you accumulate more wealth, however, it becomes more difficult to buy more happiness.  After that, people begin to realize that life experiences, using their valuable time wisely, and feeling connected to their loved ones are the real ingredients for happiness.

This article was originally published on The World Bank’s People, Spaces, Deliberation Blog. Publication does not imply endorsement of views by the World Economic Forum.

Image: People enjoy the sunny spring weather as they sit on the banks of Lake Zurich. REUTERS/Arnd Wiegmann.