Wealthy and middle-class baby boomers can expect to live substantially longer than their parents’ generation. Meanwhile, life expectancy for the poor hasn’t increased and may even be declining, according to a report published Thursday by several leading economists.

Call it a growing inequality of death — and it means that the poor ultimately may collect less in money from some of the government’s safety net programs than the rich. 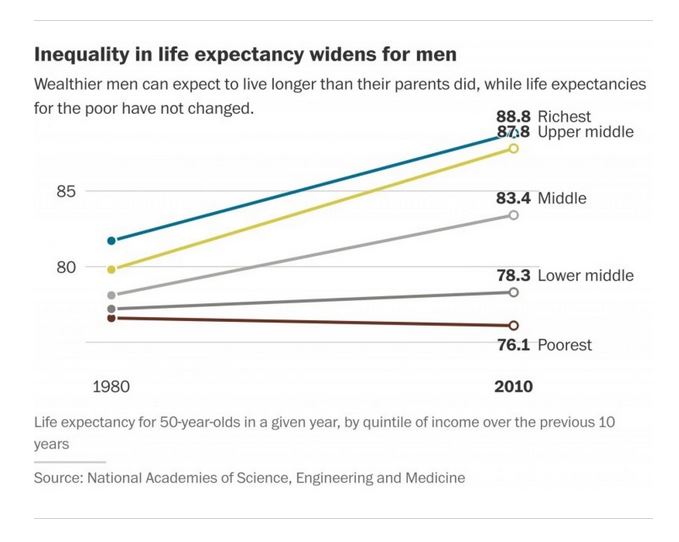 The corresponding life expectancies among women are 92 and 78 years of age. The authors considered the effect of these shifts on the federal budget and the full range of entitlements. As their years lengthen, the rich will benefit more from Social Security, a program intended to help protect the poor from poverty in old age.

Economists and public health experts have long known that while the U.S. life expectancy has nearly doubled over the past century, more affluent Americans have been dying later.

The new report, ordered by Congress and published by the National Academies of Sciences, Engineering and Medicine, attempts to project those trends into the future. How long can the boomers alive today expect to draw checks from Social Security?

Peter Orszag, one of the chairmen of the committee that wrote the report and a former senior official in the Obama administration, said he was surprised by the differences among this group by income.

“The bottom of the socioeconomic distribution isn’t experiencing any material increase in life expectancy,” he told Wonkblog.

Those disparities are partly due to the varying lifestyles of the rich and poor, who are more likely to be obese and to smoke cigarettes. More affluent Americans have quit smoking en masse over the past few decades, but the poor have not. If more of them give up the habit in the future, some could live longer.

Yet factors such as obesity and tobacco use account for less than a third of the gap in life expectancy, according to the report. Maybe the gap is due to stress, or maybe it develops during early childhood or even before birth.

Researchers haven’t identified the causes with precision, but whatever they are, these trends have important consequences for those who rely on federal entitlements.

The government can expect to spend about the same amount on men born in 1930 regardless of their incomes, the report found. Richer beneficiaries live longer and cash more generous checks from Social Security. Poorer beneficiaries rely more on programs such as Medicaid and disability insurance, in part because they aren’t as healthy.

Among Americans born 30 years later, the government will spend substantially more on the richest Americans. In that group, the benefits each man will receive over his lifetime were worth an average of $522,000 in 2010. In the poorest group, that figure was just $391,000. (These numbers don’t account for the larger share of taxes paid by the most affluent.)

The report also discusses raising the retirement age for Social Security, an idea advocated by several Republican candidates for president.

For the poorest group, benefits would decrease from $122,000 to $92,000, a reduction of 24.6 percent. Since the poorer group can’t expect to live as long, forcing them to wait to begin drawing their benefits in full would eliminate a larger portion of their retirement.

Eugene Steuerle, an economist at the nonpartisan Urban Institute who was not involved in the report, argued that policymakers should consider raising the retirement age all the same. There are cheaper ways of helping workers in jobs that don’t pay well, he said.

Congress could ensure a meaningful minimum benefit for them when they retire. Or lawmakers could reduce their taxes. All workers pay taxes, even if some — especially those who are making less money — don’t live many years into retirement.

“The issue with the retirement age is: How do we get enough workers in our society to support the benefits we want?” Steuerle said.

This article is published in collaboration with the Washington Post’s Wonkblog. Publication does not imply endorsement of views by the World Economic Forum.

Image: People walk on an overpass in a business district of Tokyo. REUTERS/Yuya Shino.