When looking at the potential effects of a trade policy, trade economists tend to insist on the real income effects, often dismissing its unemployment effects as of second-order importance, whereas policymakers and the public at large tend to voice concerns about jobs gained or lost.

Consider the Transatlantic Trade and Investment Partnership (‘TTIP’) between the EU and the US. On 17 June 2013, Presidents Obama and Barroso jointly launched the EU-US trade agreement negotiation “for the sake of the jobs it creates”.1 Strong political oppositions to this trade deal are also expressed in terms of jobs. A spring 2014 Pew Research poll found that 50% of Americans, 49% of French and 38% of Japanese respondents saw trade as destructive of employment, even as more than half of Europeans and American citizens were in favour of such a free trade and investment agreement between the EU and the US.2 More generally, Lü et al. (2012) provide evidence that labour market outcomes shape attitudes towards trade in the World’s two largest economies – China and the US. By contrast, extant academic studies of TTIP focus mainly on its real income effects to assess its welfare implications (e.g. Aichele et al. 2014).

Any reform that raises aggregate demand boosts job creation, which raises incomes and wages and reduces unemployment (an expansion effect) – thus, focusing on aggregate unemployment, as policymakers tend to do, or on real wages, as economists usually do, looks like looking at the same issue from two different angles. But this view misses the other half of the story whereby trade reforms reallocate resources across sectors. This reallocation effect has an impact on a country’s unemployment rate because sectors have heterogeneous labour market frictions – all else the same, the unemployment rate increases if the trade reform achieves a reallocation of resources towards labour market friction-intensive sectors, and conversely if sectors with relatively high labour market frictions contract and sectors with relatively high matching efficiency expand following this trade reform. Carrère et al. (2014) provide empirical evidence for this mechanism in a panel of 97 countries. Hence, the real income and frictional unemployment effects of trade liberalisation can be imperfectly correlated – Figure 1, to which we return in greater detail below, illustrates this point for the Transatlantic Trade and Investment Partnership case.

Figure 1. Changes (%) in unemployment level and real income under the Transatlantic Trade and Investment Partnership for selected country members 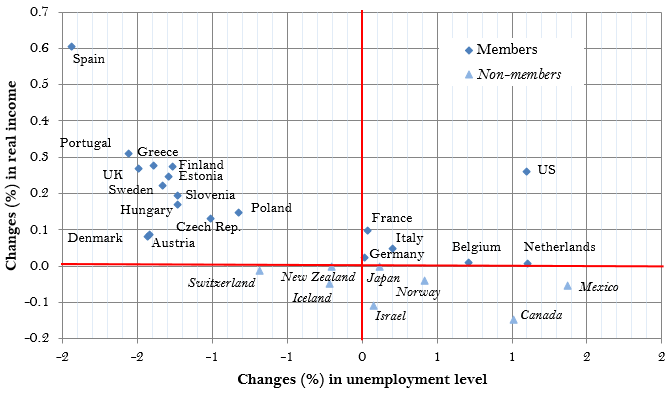 In a recent paper (Carrère et al. 2015), we address the concerns on both incomes and unemployment and propose a model in which trade reforms reallocate resources across sectors and, by the expansion effect, affect overall job creation and real incomes. Specifically, we design a multi-sector general equilibrium trade model à-la Eaton and Kortum (2002) and Costinot and Rodríguez-Clare (2014) with labour market frictions and equilibrium frictional unemployment in the spirit of 2010 Nobel Prize winners Diamond, Mortensen and Pissarides and as modelled in Helpman and Itskhoki (2010). In equilibrium, trade reforms influence both real incomes and unemployment rates. Importantly, though both tend to be correlated in the expected fashion – what is good for wages is usually good for employment – the model is flexible enough to allow for income and employment effects to work in opposite directions. This arises because we allow labour market frictions to vary sector by sector. We estimate sector-specific frictions and find substantial heterogeneity. These estimates correlate well with observables such the US unemployment rate in 12 manufacturing sectors. The 2008 financial crisis shifts US unemployment rates in all sectors in a parallel fashion (see Figure 2).

Figure 2. Correlation between estimated matching frictions and US sectoral unemployment rates for the disaggregated manufacturing sectors

As a result, trade patterns influence the equilibrium unemployment of countries above and beyond standard allocative efficiency effects.3 Equipped with this, we compute the potential unemployment and real income effects of several trade partnerships and of trade imbalances.

The first counterfactual is run on the Transatlantic Trade and Investment Partnership: we estimate the real income and unemployment effects for 28 OECD countries of eliminating trade barriers including all (mostly low) tariffs between the US and the EU. We find that such elimination of trade barriers has minor and heterogeneous unemployment and real income effects on EU countries.

As shown in the Figure 1 above, all countries signing the agreement gain in terms of increased real incomes. By contrast, the effect on country-wide employment is highly heterogeneous, both in direction and magnitude. Total unemployment in the US is predicted to rise by 1.1% from a rate of 5.9% in the baseline year 2008, but it is predicted to drop in most EU countries. These results underline the key prediction of our theoretical framework: gains from trade in terms of real incomes and employment are not perfectly correlated. While trade liberalisation may engender growth in real incomes due to increased production and reduced import prices, it may also lead to a restructuring of production and consequent reallocation of workers across sectors. Insofar as these sectors are heterogeneous in their ability to match workers to jobs, the overall unemployment level may fall or rise. According to our simulations, countries specialising in relatively high-friction sectors would experience an increase in their long-term unemployment level under the Transatlantic Trade and Investment Partnership. This seems to be the case for countries such as Belgium, Italy, and the Netherlands.4

As could be expected, real income effects of Transatlantic Trade and Investment Partnership on OECD countries that are excluded from the agreement – and as such suffer from trade diversion – are usually negative and small.  Once again, the effect on employment is heterogeneous, both in direction and magnitude.5

We also compute the potential unemployment and real income effects of the Transpacific Trade Partnership.  On 24 June this year, amidst controversy and opposition by trade unions, the Republican-controlled US Senate granted President Obama ‘fast track authority’ (formally known as ‘Trade Promotion Authority’) to negotiate what is essentially a free-trade agreement among eleven nations on both sides of the Pacific Ocean from which China is conspicuously left out (see Hufbauer 2015). Importantly, this trade deal aims at lowering tariffs and other trade barriers and homogenising regulations in a wide range of sectors, including agriculture and banking.  As for the Transatlantic Trade and Investment Partnership, we estimate the real income and unemployment effects of the Transpacific Trade Partnership for 28 OECD countries. Again, we find heterogeneous and mostly minor real income effects (with real incomes increasing by less than 1.2% for all participating OECD countries). Unemployment effects are more sizeable – the number of unemployed workers is expected to fall by 2 to 5% in Canada, Japan, New Zealand, and Mexico and by less than 1% in the US.

That the welfare effects of lowering trade barriers where they are already low are small should not come as a surprise – after all, Caliendo and Parro (2015) estimate that NAFTA increased real incomes in Mexico by 1.3% and had a trivial effect on US and Canadian real earnings (+0.08% and -0.06%, respectively), even though it increased the intra-bloc trade by 11% for Canada, 41% for the US, and 118% for Mexico. The effects we estimate are of comparable magnitudes (see also Costinot and Rodríguez-Clare 2014). But, as we have shown in the case of the trade partnerships, job reallocation-effects matter. This can partly explain why trade unions are so opposed to such trade agreements and why the US Senate passed the Trade Adjustment Assistance programme (which helps workers make the transition to new jobs) in the same breath as the ‘fast track’. In the same vein, NAFTA is associated with the loss of hundreds of thousands of (mostly manufacturing) jobs, according to liberal outfits such as ‘Public Citizen’ in the US (Public Citizen 2014). The pro-trade Peterson Institute for International Economics estimates that the transpacific treaty will reallocate 0.5% of the labour US force (about 650,000 workers) towards exported oriented jobs by 2025 (Petri 2015). We go further than simply computing the reallocation of workers across sectors by designing a model of the world economy where unemployment arises in a structural way. We find that trade does have a macro impact on the unemployment rates of countries – but this impact is small. When comparable, the magnitudes we find are consistent with those of the aforementioned studies.

The income and unemployment effects of balancing trade

By contrast to the remaining trade barriers in the OECD, trade imbalances are large – the trade deficit in the US is currently running at about 3.4% of GDP, while Germany’s trade surplus is worth 5.8% of its GDP. Accordingly, removing such imbalances can have sizeable real income and unemployment effects.6 The number of unemployed workers would typically rise in countries with trade deficits (by 2% in the US and 5% in France) and fall in surplus countries (by 3% in Germany and 14% in Switzerland). According to our model, the double-digit rise increase of the unemployment rates of countries such as Greece or Portugal since the crisis of the unemployment levels of countries can to a large extent be associated with the tightening of their trade gaps since then. In sum, the average real income and unemployment effects of trade agreements are relatively small. The effects associated with trade imbalances are much larger.

Costinot, A and A Rodríguez-Clare (2014), “Trade theory with numbers: Quantifying the consequences of globalization”, in Gopinath G, E Helpman, and K Rogoff (eds.) Handbook of International Economics Vol. IV, Elsevier.

Petri, P A (2015), “What economic models tell us about the TPP”, Peterson Institute for International Economics, 18 February.

Public Citizen (2014), “NAFTA’s 20-year legacy and the fate of the Trans-Pacific Partnership”, February.

3 This assumption distinguishes our framework from contemporaneous work such as e.g. Felbermayr et al. 2014.

4 We introduce a welfare criterion following Atkinson 1970 and Sen 1976 to project both the real income and unemployment effects on a single dimension in order to resolve such ambiguity.

5 See the new VoxEU ebook, Catalyst? TTIP’s impact on the Rest, which identifies the possible negative and positive impact of TTIP for third nations.

6 We use 2008 data, the most comprehensive available for our purposes. The counterfactual in Dekle, Eaton, and Kortum (2007) is the removal of current account imbalances; in our paper, we remove trade imbalances.

Asia and the Pacific requires collective efforts to drive and sustain a recovery, considering the huge impact the pandemic has had on output.

The new director-general at the WTO will have a raft of challenges on their desk. Here are our suggestions for priorities to focus on – one month at a time

All at sea: the shipping crews stranded by COVID-19

How COVID-19 accelerated the shift towards TradeTech