The 10 most competitive countries in Latin America

In the latest edition of the Global Competitiveness Index, the top ranked economy from Latin America and the Caribbean is 35th-placed Chile; the lowest is Haiti, ranking 134th of the 140 countries assessed.

Competitiveness-enhancing reforms have become more urgent in Latin America as the shock of falling commodity prices has exacerbated economic difficulties in many countries – the IMF is projecting growth of below 1% for the region in 2015, down from 2.9% in 2013.

The Global Competitiveness Index uses quantitative data and the results of a survey of executive opinion to rank countries on 12 pillars of competitiveness, which are combined to make up their overall position.

Chile. Despite dropping two places to 35th overall, Chile retains fundamental strengths including well-functioning financial markets, a relatively stable macroeconomic environment and effective institutions. It has lost ground in the last year on the pillars of goods and labour market efficiency, with restrictive labour regulation identified by the executives surveyed as the most problematic factor for doing business in the country. The quality of primary education is another area holding back Chile’s competitiveness. 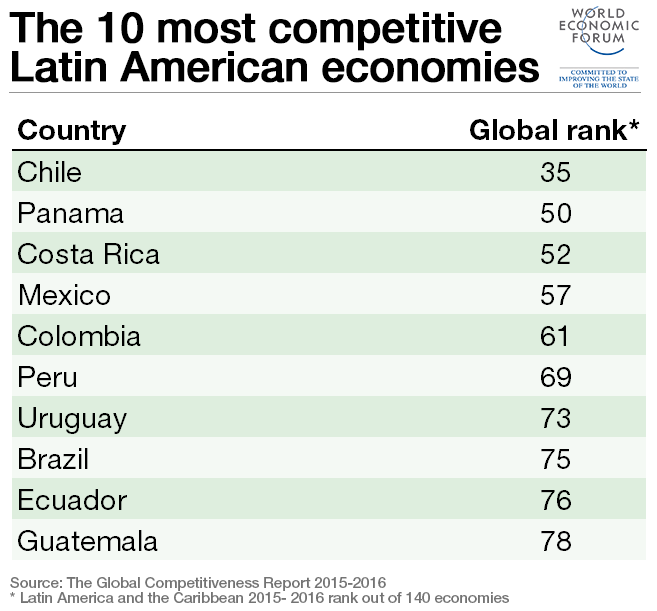 Panama. With modest advances on some pillars mixed with retrenchment on others, Panama drops two places to 50th on the overall Index. Its strongest pillar, and one which improved in the last year, is financial market development – here it rates 15th globally. Panama also scores respectably on infrastructure, goods market efficiency, business sophistication and innovation. It is held back by the quality of its institutions, with diversion of public funds a particular concern, and its education system.

Costa Rica. Scoring two places lower than its neighbour Panama, at 52nd, Costa Rica likewise outperforms its overall ranking on the innovation and business sophistication pillars – although it has lost some ground here in the last year. Costa Rica has also gone backwards on the pillars of goods and labour market efficiency. It performs better than Panama on institutions, however, and its higher education system is rated as one of its strengths.

Mexico. Despite further deterioration in an already-poor institutional environment, with executives again voting corruption as their biggest concern, Mexico progresses four places to 57th in the overall Index. It owes this advance largely to improvements in the financial markets, business sophistication and innovation, which suggest that recent reforms are bearing fruit. While progress has also been made on improving the country’s labour market efficiency, this remains its weakest pillar.

Peru. A drop of four places to 69th is accounted for largely by Peru losing ground on the pillars of labour and goods market efficiency and business sophistication. Its main competitive strengths are relative macroeconomic stability and well-developed financial markets, a pillar on which it moved forward in the rankings compared to last year; its weakest pillars are institutions and innovation.

Uruguay. While gaining seven places to rank 73rd overall, Uruguay still has not recovered the ground it lost between the 2011-2012 edition of the Index. As with Colombia and Peru, financial markets were its main area of improvement in the last year, while it lost ground on the macroeconomic environment pillar due mainly to a poorer government budget balance. Unusually for the region, institutions are Uruguay’s strongest pillar, with a global ranking of 30th. Labour market efficiency is its weakest pillar, with executives also rating restrictive labour regulations as the biggest concern for doing business.

Brazil. Continuing its downward trend, Brazil drops 18 places to 75th overall, and is now 27 places lower than in the 2012-2013 edition. It fell in nine of the 12 pillars, with particularly notable drops in health and primary education, higher education and training, the macroeconomic environment – with a high fiscal deficit, rising inflationary pressure and poor growth prospects – and institutions, amid recent high-profile corruption scandals. Brazil’s main competitive strength is its large market size, ranking 7th globally.

Ecuador. Excluded from last year’s Index due to concerns over the reliability of data, Ecuador returns in 76th position overall. Its weakest pillars are institutions and the efficiency of goods and labour markets; restrictive labour markets top the list of executives’ concerns, followed by tax rates and the complexity of tax regulations. Its strongest pillar, albeit with a relatively modest global ranking of 59th, is health and primary education.

Guatemala. Placing 78th for the second year in a row, Guatemala’s performance is little changed from last year – although it has made progress in financial development, now its strongest pillar ahead of goods market efficiency and business sophistication. In a familiar story for the region, its weakest pillar is institutions – among executives surveyed, crime and theft narrowly beat corruption as the issue of most concern for doing business.

Image: People look out to the Los Andes mountain range next to the city from a rooftop of a commercial center in a business district in Santiago, Chile REUTERS/Ivan Alvarado