What is maturity mismatch, and why is it a problem?

The high degree of maturity mismatch in banking is due to their unprecedented expansion in mortgage lending (Jordà et al. 2014b). In this column, we discuss simple proposals to contain financial stability concerns created by this historical trend.

As we review in our CEPR Policy Insight (Goodhart and Perotti 2015), historically banks were nowhere near as mismatched as today. First, they relied much more on own capital. But they also lent overwhelmingly over the short term, primarily for self-liquidating, trade-related working capital, as ‘real bills’ financing trade. Even in the early German banking model where banks were supporting long-term capital investment, the key funding came from bond issuance placed by the banks themselves.

Even with limited maturity transformation there were frequent runs, as bank assets remained less liquid than their liabilities. The core of bank regulation (Calomiris and Watson 2014) was not capital requirements, requiring a difficult value assessment, but reserve requirements, which is easily verifiable. Even in a context of limited maturity transformation, financial stability meant regulating access to liquidity. The Bank of England in the 19th century was a competitor to other commercial banks. It had no direct supervisory oversight, nor could it inspect banks’ books. It controlled the quality of bank claims it would discount, and more broadly the quality of bills being accepted in the market.

In the last century, real estate funding by banks grew steadily, though on a shorter term basis than today. The 30-year mortgage was created after WWI, when the US encouraged house purchases by returning veterans. As the format became diffused, it was initially funded by issuances of long-term liabilities. The expansion of bank real estate lending at high loan-to-value (LTV) ratios funded on wholesale markets is a recent historical aberration, and is the main cause of their increasing maturity mismatch. 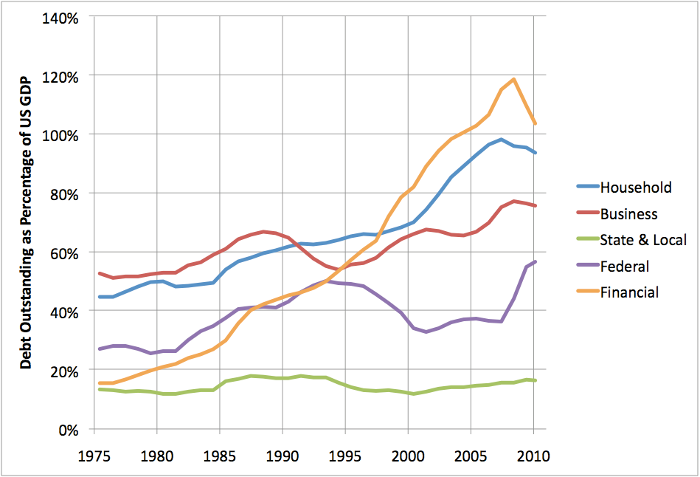 The breadth and depth of the crisis was due to the scale of unstable funding for illiquid assets. Creating exposure to liquidity risk is profitable in good times, as short-term funding is much cheaper. However, it also creates massive losses in liquidity crises, a powerful risk externality (Perotti and Suarez 2012). Unfortunately, the regulatory response to liquidity risk has been insufficient. Aside from marginal tools such as liquidity coverage ratios (LCRs), the implementation of structural rules on stable funding are delayed and appear at risk. This is a major concern. Though it may not appear salient at present, liquidity risk will re-emerge once central banks start reducing their expansionary stance.

What should be done?

Most financial crises in recent decades were caused by losses related to property lending (Jorda et al. 2014a). Real estate credit enabled rapid loan expansion with the appearance of tangible collateral. But real estate lending is not just riskier than previously believed (due to a significant systemic component). It is also the prime cause of the maturity mismatch and excessive leverage that made the banking system so fragile.

Land is scarce and its availability is fixed, so real estate value has a large purely rent component. Thus, in any expansion, real estate prices generally rise faster than consumer prices, becoming prone to bubbles and busts. To avoid socialising risk, an intermediation process is needed where asset financing comes from investors that assume the bulk of their risk.

We call for solutions that focus on two principles: greater maturity matching, and no use of insured deposits. These goals may be achieved by various means.

The shared responsibility mortgage (SRM) of Mian and Sufi (2014, Chapter 12) goes in the right direction. First, during a long upswing in prices, borrowers may become unwilling to share in the appreciation with a lender. Thus, we need some regulatory requirement that mortgage-related lending has a loan-to-value ratio of less than 70%, with additional funding raised by property lenders via equity participation of up to 25%. This would still enable the minimum first-time deposit to be as low as 5% of property value. Property should be revalued at regular intervals, with the house owner having the right to buy back some equity share of the lender.

An objection is that shared responsibility mortgage loans may vanish during a property price collapse. This may require public intervention, as in the case of the UK government’s ‘Help to Buy’ scheme. This ensures access to finance during a crisis, while shifting state aid from Wall Street to Main Street.

Additionally, mortgages could be provided by property finance companies (PFCs), designed to differ from banks. Property finance companies would not offer demand deposits or payment services, and would back their participation in shared responsibility mortgages with equity or other allowable loss-absorbing (bail-inable) capital. A property company could borrow only modestly in the interbank market, or other wholesale sources of funds, and should hold a minimum ratio of liquid assets, supported by increasing fines as its reserves decline. It would be allowed to deal in derivatives only so far as to hedge specific risks.

Besides their equity participation, property finance companies could offer all varieties of mortgage (though foreign currency mortgages should be banned, except for foreign residents). Property companies could raise remaining funds by the issue of term deposits, with a tenor of 90 days or more, and from bonds, preferably issued along the Danish model, designed to reduce maturity mismatch while controlling adverse section (for an account, see Berg and Bentzen 2014). Securitisation of these mortgages should be encouraged as admissible investment for specialised bond funds or pension funds, eliminating mismatch of the last securitisation wave. Neither banks nor property finance companies would be allowed to hold such collateralised mortgage obligations (CMOs).

Banks should be discouraged from making loans collateralised on property by severe restriction on their maturity. In order to further contain mismatch, required stable funding ratios should rise as their maturity increases.

With banks carving out their mortgage business, they would revert primarily to the short-term finance of business, plus short-term consumer credit. They would become smaller and thus more manageable, justifying their public guarantees. On the other hand, other bank activities may be relieved. In support of corporate clients, banks could make markets and deal in hedging derivatives. They could be allowed to hold equity in corporates and make long-term loans to them, provided these assets were backed one-for-one by equity, or total loss-absorbing capacity (T-LAC) in excess of regulatory requirements.

There should be no need to provide deposit insurance for property finance companies. The outstanding mortgages of a failing company would be transferred to another asset management company. If there was a run on property companies as a group, the central bank could decide which were worthy of support. Critically, this construction allows property companies to fail with no effect on the payment system or credit provision to business.

The reform would validate the provision of deposit insurance and the process of resolving failing banks, having lessened a critical component of liquidity risk and scaled down considerably public exposure.

In conclusion, our argument is that a most critical structural divide is between property-related long-term mortgage financial intermediation and short-term traditional banking. The Basel committee has also recognised the need to contain the excesses of maturity transformation by publicly insured banks. The issuance of its final recommendations on the adoption of stable funding norms commensurate to the maturity and liquidity of bank assets completes the essential architecture of regulatory reform since the crisis. We hope that politicians will have the courage to complete the task, at a time of visible reform fatigue. But let us recall also that NSFR norms have been rewritten extensively, to the point where most banks already satisfy them, and will be vulnerable to regulatory arbitrage as any fixed ratio. We are convinced that a more structural approach is justified to contain this structural issue. Banking prospered for centuries without stretching its maturity transformation mandate.

Author: Charles Goodhart was the Norman Sosnow Professor of Banking and Finance at the London School of Economics until 2002; he is now an Emeritus Professor in the Financial Markets Group there. Since his PhD in Finance at MIT (1990), Enrico Perotti has taught in Boston and London before becoming Professor of International Finance at the University of Amsterdam.