The idea that we can, or should, measure happiness is a controversial one. When politicians first announced that the government Office for National Statistics (ONS) was planning to measure national well-being, criticism came from all directions. So, as the ONS releases its 2014/15 measures of personal well-being – suggesting that more people are feeling positive about their lives than before – now seems a good moment to take stock of how and why the government takes an interest in our well-being.

But first, I need to declare an interest: I have served as a member of the Technical Advisory Group on this project, and I am currently leading a £1m grant to review evidence on how policy and practice can improve community well-being. So, perhaps unsurprisingly, I think this is an important and wise idea. But now, let me explain why.

One well-recognised approach to measuring the success of a nation is to add up its Gross Domestic Product (GDP); in other words, to count the total monetary value of a nation’s goods and services. Measuring GDP is likely to remain a vital marker for economists, but it cannot capture everything that is important to people.

This is because some of the factors that determine our quality of life cannot be measured in terms of monetary value. For instance, our health, our family and relationships, the quality and nature of our work, the environment and education are all important contributors to our sense of satisfaction with our lives. If we are to measure what really matters to people, then we need to measure these factors, too.

What’s more, the relationship between wealth and well-being is complex: put simply, poverty makes people miserable, but wealth doesn’t necessarily make people happy. When people or nations are poor (Somalia, for example, with an estimated per capita GDP of only US$600), then differences in material wealth make a big difference to their happiness.

When people or nations are relatively wealthy (For instance, Luxembourg has a massive per capita GDP of US$96,000), differences in income make a much smaller impact on levels of well-being, while other factors start to have a bigger impact. Since the UK falls in the latter category, it makes sense for the government to start monitoring these other factors more closely.

Some people may describe the ONS’ efforts to measure well-being as “Cameron’s happiness project”. But the idea that we should focus on well-being –- or perhaps quality of life –- has a longer history, and has gained wider international support.

In 2009, France’s Commission on the Measurement of Economic Performance and Social Progress, led by Nobel-prize-winning economists Joseph Stiglitz and Amartya Sen, argued that that the promotion of well-being should be an explicit aim of government. They held that data should be collected, to ensure that we can measure progress in the fields of “societal well-being, as well as measures of economic, environmental and social sustainability”, as well as economic performance.

This ambition is clearly reflected in the mission statement of the Organisation for Economic Co-operation and Development (OECD): “To promote policies that will improve the economic and social well-being of people around the world”. So, it is unsurprising that the OECD has fully embraced the idea of measuring well-being.

Measuring wealth that isn’t material, such as happiness or well-being, is a complicated business. One part of the puzzle is measuring personal well-being – that is, a person’s satisfaction with the quality of their life. This is what the ONS’ latest results have aimed to inform us about, by asking over 160,000 people four simple questions:

• How satisfied are you with your life nowadays?

• How happy did you feel yesterday?

• How anxious did you feel yesterday?

• To what extent do you feel the things you do in your life are worthwhile?

You can compare the different results over the years below – overall, it seems as though our well-being is improving. 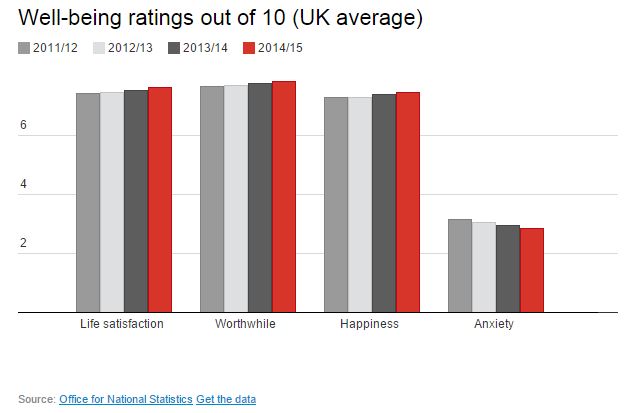 A vast array of political decisions directly influence the things that determine our well-being. This is more obvious in some areas than in others. For instance, it’s clear that policies which affect the health service will have an impact on our physical health. But perhaps less obviously, economic decisions also have a dramatic impact on our well-being: the recent economic recession was seen to have a direct impact on mental health.

On top of this, divorce laws, laws on same-sex marriage, pre-nuptial agreements and childcare arrangements all influence relationships and are all matters for policy-makers. Education policy, taxation rates, rules on benefits and investment decisions by government all determine the quality of our employment, and therefore our well-being. Then add to this long list crime and justice matters, working hours, transport policies and city planning – all of these involve decisions at a state level, and have an impact on our well-being.

So, rather than being a left-wing irrelevancy or a right-wing conspiracy, a focus on well-being is an important aspect of civilised government.

Even if our government isn’t explicitly trying to increase “happiness”, it should at least be making sure that it’s not harming well-being. We as citizens need to be able to judge this and call those responsible to account. To do so, we need access to information that allows us to judge our politicians in terms of how well-being is changing, as well as whether the economy is growing or shrinking.

Although it’s difficult and complex to measure well-being and although this way of thinking poses as many challenges to government as it solves, a decision to measure well-being, and a commitment to consider what might improve a nation’s well-being, has the potential to make a real difference. As the New Economics Foundation says, this is “economics as if people and the planet mattered”.

Image: Attendants stand in a line to pose for a picture in Beijing. REUTERS/Jason Lee.

A psychologist explains how COVID-19 is changing our behaviour, especially our heightened emotional connection with strangers and sense of community.

Lockdown is an emotional experience. Read an extract from Rana El Kaliouby's book 'A Girl Decoded' on how the expression of feelings is subject to cultural differences.

These Harvard scientists think we'll have to socially distance until 2022

COVID-19: Why hoarding supplies is human nature, according to a psychologist

Coronavirus: Here's how to avoid handshakes without offending anyone

Here's why society is reacting with panic to coronavirus