Cities with the highest and lowest taxi fares

If you’re visiting Oslo on a budget, definitely think twice before you take a cab. The Norwegian capital has the most expensive taxi fares in the world, with a typical three-mile ride during the daytime costing $32. That’s over three times as much as London, according to the UBS Prices and Earnings report.

For the same amount of money, you could actually travel for 41 miles in a cab in Cairo. Kiev and New Delhi are even cheaper, coming to just $1.59 and $1.54 respectively for a three-mile trip. Taking a cab over the same distance in New York City would cost $11.67. 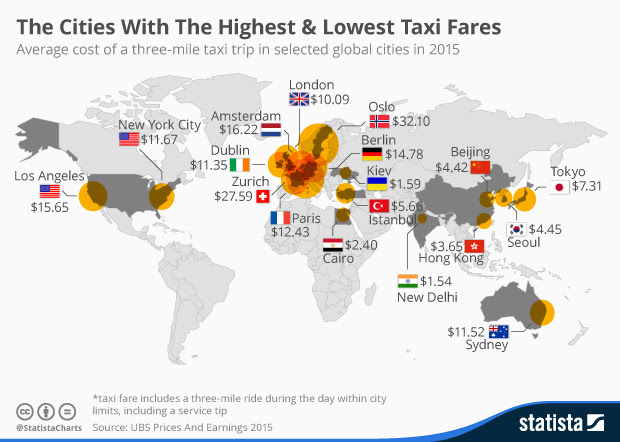 Have you read?
How green is your city?
The city where 77% of journeys are sustainable
Which is the world’s most polluted city?

For many people, COVID-19 has changed how they view their home and what they're looking for from its design. This is how architects are responding.

The incredibly simple solution to saving lives during a heatwave

Giving heatwaves names could help people understand the threat they pose, a move which could save lives, according to heat experts.

3 Inspiring Places Putting Nature First In Their Cities And Infrastructure

How COVID-19 will change the way we design our homes