How effective is European QE?

In January 2015, the ECB announced a substantial increase in its asset purchase programmes.1 Under its existing programmes, the ECB had been buying asset-backed securities and covered bonds of around €10bn in total per month. Following the January 2015 announcement, the total assets purchases would increase to €60bn per month between March 2015 and September 2016. The total assets to be bought in this window are €1.1 trillion, 9% of the stock of central and other government debt of Eurozone nations, widely referred to as quantitative easing (QE).2

Risk-sharing in the ECB’s QE

In the latest of its monthly surveys of leading UK-based macroeconomists, the Centre for Macroeconomics (CFM) focused on the risk-sharing arrangements within the QE programme. The ECB indicated that the credit risk of the €6bn debt of the supranational EU institutions and €4bn of the national debt securities would be shared across the Eurosystem according to shareholdings.3The credit risk of the remaining €40bn of national securities would remain with the national central bank of the issuer. This is in contrast to the ECB’s earlier Securities Market Programme (SMP) in 2010-2012, which involved the acquisition of €220bn public and private debt securities from Greece, Ireland, Italy, Portugal and Spain to be held to maturity. Profits and losses are to be shared across national central banks according to the ECB’s shareholdings rather than borne by the national central bank of the issuing government.

According to press reports, the decision to allocate the major fraction of national securities back to national central banks reflects a compromise decision.4 A number of arguments have been put forward in favour of this approach:

There are also arguments in favour of greater risk-sharing:

Q1: Do you agree that the design of the ECB’s QE programme reduces its effectiveness? 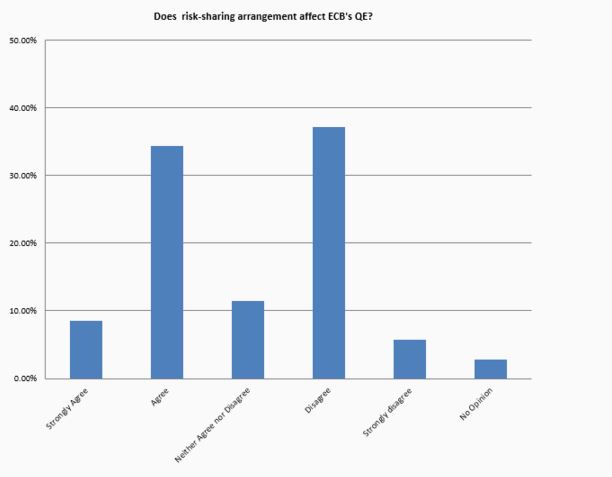 Those who agree with the proposition tend to emphasise interest rates as the channel through which QE affects activity. Panicos Demetriades (Leicester) notes that several countries are likely to face higher borrowing costs and David Bell (Stirling) describes it as “entirely fanciful that the market will ignore the allocation of risk”.

Others are more concerned with signalling. Sir Christopher Pissarides notes that “national central banks are to take on the risk but cannot monetise the debt in the event the government cannot pay and cannot affect interest rates. It’s an odd situation that might deter private lenders.” Ethan Ilzetzki (LSE) asks the question: “If the EU is not willing to bet on its own survival, who should?” Angus Armstrong (NIESR) goes further, suggesting that limited risk-sharing is likely to increase the risk of capital flight if there is concern about government solvency.

Those who disagree with the proposition either emphasise the monetary base channel by which QE affects activity, or think the consequences simply too small to matter. Wouter den Haan (LSE) notes that QE involves adding liquidity to the economy and how risks are shared has no effect on this operation. Similarly, Jagjit Chadha (Kent) says that monetary conditions are determined by the liabilities of the central bank, hence the “risk-sharing has little impact on the effectiveness of QE”. Patrick Minford (Cardiff Business School) describes the very notion that credit risk is not shared by the ECB as “far-fetched”.

Fragility of the Eurozone

The limited risk-sharing on the €40bn of additional national securities is in contrast to another major monetary union and the ECB’s previous actions. In the United States, assets bought under QE are held in the System Open Market Account (SOMA) at the New York Federal Reserve and any losses are shared across the Federal Reserve System. Moreover, while ECB President Mario Draghi has made clear that “in Outright Monetary Transactions (OMT) full risk-sharing is fundamental for the effectiveness of that monetary policy measure”, Benink and Huizinga (2015) suggest that subsequent risk-sharing arrangements within QE may embolden those would prefer risks to be contained within national boundaries (the vote for OMT was not unanimous).5,6

Q2: Do you agree that the structure of the ECB’s QE programme makes the Eurozone more fragile and increases the risk of one country leaving the euro?

A total of 36 economists responded to this question in the CFM survey. Leaving aside the eight who expressed no opinion or who neither agree nor disagree, the votes are again evenly split between those who agree and those who disagree with the proposition.

Those who agree with the proposition include Ricardo Reis (LSE and Columbia) who notes that if we consider the possibility of a country leaving the Eurozone, reneging on TARGET II and/or ELA balances, then this arrangement encourages a “run on their local banks and force an exit”. Others are concerned about the signal of political commitment. Martin Ellison (Oxford) suggests that QE risk-sharing arrangements do not “bode well for the type of risk-sharing reforms that will ultimately be needed to keep the Eurozone together”; and Nicholas Oulton (LSE) notes that the failure of Eurozone countries to agree that “we are all in this together” surely makes the exit of one or more countries more likely.

Those who disagree with the proposition tend to emphasise that whatever fragilities exist in the Eurozone, they are not the result of the QE programme. Ray Barrell (Brunel) supports the risk-sharing arrangements as they minimise moral hazard and so prevent higher debt by countries trying to ‘game the system’ by issuing even more debt. Costas Milas (Liverpool) expresses the view that the limited risk-sharing reflects a lack of structural reform, and that it is this lack of reform that undermines growth and creates the fragility. John Driffill (Birkbeck) acknowledges that the QE programme could have been better designed, but says that it does not increase the fragility of the Eurozone.

Benink, H and H Huizinga, (2015), “The ECB’s bond purchase programmes and the limits of national risk-sharing”, VoxEU.org 16 May.

3 The credit risk on the supranational bonds is marginal. In the case of the European Investment Bank, the 28 EU members are shareholders and have joint liability. Over 90% of the capital is callable on the member states.

6 The lack of unanimity in the vote for QE is reported in the ECB’s ‘Introductory statement to the press conference (with Q&A)’, 6 September 2012. http://www.ecb.europa.eu/press/pressconf/2012/html/is120906.en.html#

Fertility in the North of Europe, is much higher than in the South a trend that has been persistent for a number of decades and differing government policy could be why.

Germany, France, Switzerland and Austria bring back routes for night trains. Travelling by rail emits much less carbon per kilometre than going by air or road.

This is where people live the longest in the EU