These are the world’s most creative countries

How is creativity connected to global economic development? A new study by the Martin Prosperity Institute, titled the Global Creativity Index 2015, presents a new model of economic development. It calls this the “3Ts” – talent, technology and tolerance – and ranks 139 nations on each of these pillars, as well as their overall measure. The three dimensions are described as follows:

1. Technology – Research and development investment, and patents per capita
2. Talent – Share of adults with higher education and workforce in the creative class
3. Tolerance – Treatment of immigrants, racial and ethnic minorities, gays and lesbians

The study says that in the knowledge economy, where consumption and production are based on intellectual capital, the 3Ts and overall creativity are linked closely to economic and social development.

So which country comes top of the overall ranking, and is the most creative economic performer? 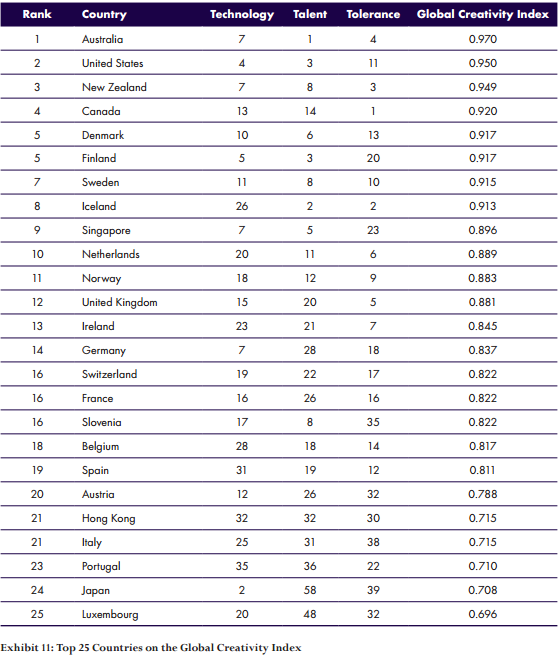 As this index shows, Australia takes the top spot, followed by the United States and New Zealand. Canada is fourth, with Denmark and Finland going for a joint fifth. Sweden is in seventh, Iceland eighth, followed by Singapore and the Netherlands.

South Korea leads in technology, Australia in talent and Canada takes the top spot for tolerance.

Have you read?
South Korea is turning into a creative economy
The personality trait that creative geniuses often share
How technology will change the way we work

These 3 countries are 3D-printing new homes

Faster and cheaper to build and more sustainable, too – could this technology be a solution to meeting the world’s housing needs? Three countries show the way.

There are inefficiencies, challenges and risks associated with what underlies capital markets: key question is whether DLT is the tech to address them.

International cooperation and the era of digital currency growth

Ashley Lannquist and Mai Santamaria 05 May 2021

As the world’s waste mounts, technology is helping communities reduce, reuse and recycle

Why businesses must drive the next evolution in global connectivity