After last week’s Paris attacks, French authorities revealed they found the passport of a Syrian refugee next to the remains of one of the suspected terrorists. Although the passport could still turn out to be fake, it sent the rumour mill into overdrive. By opening its doors to refugees, could the West inadvertently be allowing thousands of terrorists into the fold? That’s what some media outlets, from the Daily Mail to the Express, seem to be suggesting. But it’s not the first time we’ve heard half-truths and myths about refugees.

Myth 1: Turning away refugees will reduce the threat of terrorism
What’s been said: In a letter to President Barack Obama, Governor Greg Abbott of Texas wrote that his state “will not accept any refugees from Syria” as this would “irresponsibly expose our fellow Americans to unacceptable peril”. He’s not on his own: more than half of US governors are attempting to stop Syrian refugees from resettling in their states.
The reality: History tells us we have very little to fear from refugees. Since 2001, the US has taken in 784,000 refugees from across the world. Of those, just three have been arrested for activities related to terrorism. The refugee route would also be one of the least effective ways to enter a country, says Kenneth Roth of Human Rights Watch: “Just as no refugee would brave crossing the Mediterranean or negotiating the land route through the Balkans if easier options were available, so these routes would hardly seem to be major avenues for well-financed terrorist groups.” More importantly, though, as Nick Stockton of Wired has argued, closing our doors to refugees could have the opposite effect: it might make vulnerable people feel even more marginalized, and create a breeding ground for the type of resentment and anger that fuels terrorism in the first place. 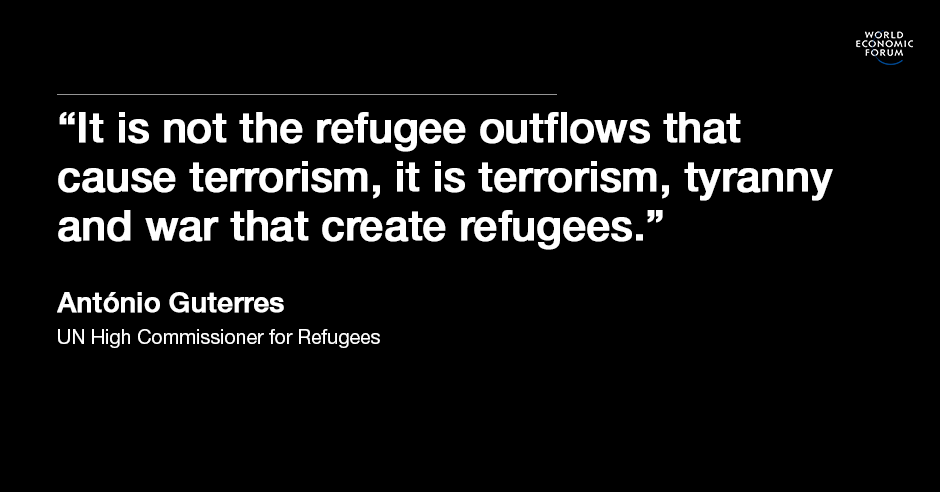 Myth 2: Refugees are a drain on societies
What’s been said: The language used to refer to refugees says it all. They’re described as a burden, a strain and a drain on countries.
The reality: Resettling refugees, especially on such a large scale, is very expensive. Between 2012 and 2013, for example, Jordan spent almost $8.2 billion when it took in thousands of fleeing Syrians. But that’s just one side of the story. Research based on countries such as the US, Denmark and Uganda has found that in the long term, refugees have a positive or neutral effect on the host country’s economy. A 2012 study in Cleveland also found that refugees were more likely to be entrepreneurial compared to natives. The same trend has been found to apply to migrants more broadly.

Myth 3: They’re not really refugees – they’re just economic migrants seeking a better life
What’s been said: At the peak of the refugee crisis this summer, Hungary’s prime minister, Viktor Orban, claimed that the majority of those attempting to make it to Europe were not fleeing war and persecution: “95% of these people are economic migrants,” he said.
The reality: Journalists at the Economist did some number crunching. First, they looked to identify those countries whose citizens were for the majority receiving some form of protection once their claims were processed. They then cross-referenced these countries against the nationalities of people reaching Europe. That led them to the following conclusion: “The headline numbers suggest that the vast majority of illegal migrants reaching Europe will be eligible for protection once they arrive.”

Myth 4: Even if we want to help, there’s no more space
What’s been said: Let’s take the example of Britain. Of the millions fleeing Syria, just a couple of hundred have been resettled there. But that doesn’t stop many people from arguing the country is “full”, as this spoof article for the Metro shows.
The reality: Across much of Europe, birthrates are declining and populations are either shrinking or standing still. The Washington Post has even gone as far as to refer to the situation as a demographic timebomb, at least for Germany. Some are therefore seeing the influx of often highly educated refugees as a boon for their countries, including Germany’s chancellor, Angela Merkel: “If we do it well, this will bring more opportunities than risks.”

Have you read?
Why the Paris attacks must not stop Europe accepting migrants
Europe’s refugee crisis explained

10 ways to go beyond a crisis response to migration

Here are 10 recommendations to build an ecosystem where social entrepreneurs with a migrant background are supported and their impact is amplified by public and private actors.

These countries are paying people to move to the countryside

From Portugal to Ireland, some countries will fund your escape to the countryside. Here are a few examples of rural relocation grants.

Here’s what Ukraine’s neighbours are doing to help refugees